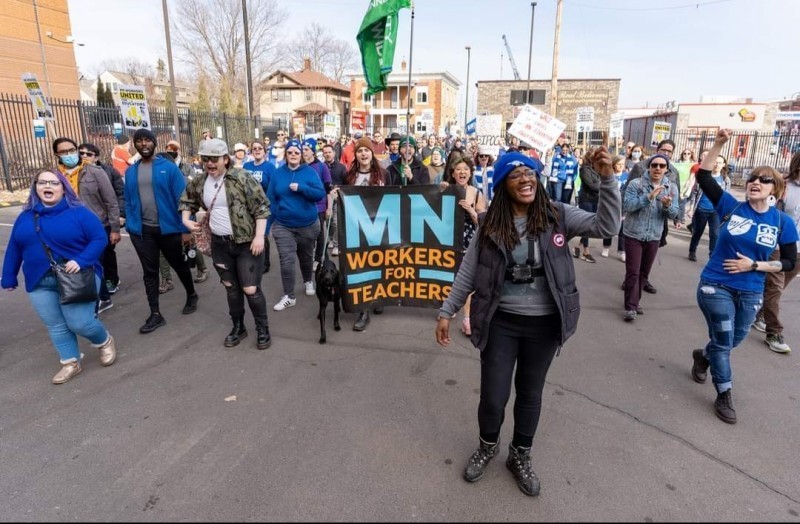 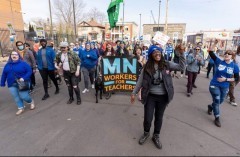 12 unions or labor organizations were listed on the event as cohosts to the MWU event, which included MWU, AFSCME Locals 3800, 2822 and 3937, CWA Local 7250, the Minnesota Nurses Association, SEIU Healthcare MN, MN Bookstore Workers United, MACE, UFCW 1189, the Minneapolis Regional Labor Federation, and the MN AFL-CIO. More unions were reported to have endorsed the events along with the list of cohosts on the event.

Around 300 union members and elected leaders attended the rally which began in the parking lot of Shiloh Temple, across the street from the Davis Center where the Minneapolis Public Schools (MPS) office is located. The rally then marched, circling the two city blocks surrounding the Davis Center.

At the Davis Center the unions delivered a scroll of the educators’ demands at the front door. Theatrics were significant as a union member dressed costume of a town crier read the demands from a large scroll and attempted to be let into the building before placing the scroll in the door handles of the building while the crowd watched and cheered.

Later, at 9 p.m. that night, the educators stated that they had received a fourth “last, best and final” offer from MPS in which MPS moved some on raises for education support professionals, but the union says that the movement did not meet the needs to consider settling the contract and that MPS will need to move further.

As of Monday, March 21, the strike has now entered its 14th day and workers remain solidly committed to winning the demands that meet the needs of their educators and students and that will allow for safe and stable schools. The educators are on strike for significant pay raises for education support professionals (ESPs) to have a living wage, for smaller class sizes, and mental health supports for students, among other demands. The ESPs are predominantly oppressed nationality low-wage workers. The union is demanding a living wage for the ESPs in which no ESP make less than $35,000 a year.

Picket lines resumed at 7:30 Monday morning at Minneapolis schools, which remain closed for the strike and according to MPS’s own data, 95% of the educators continue to honor the strike.