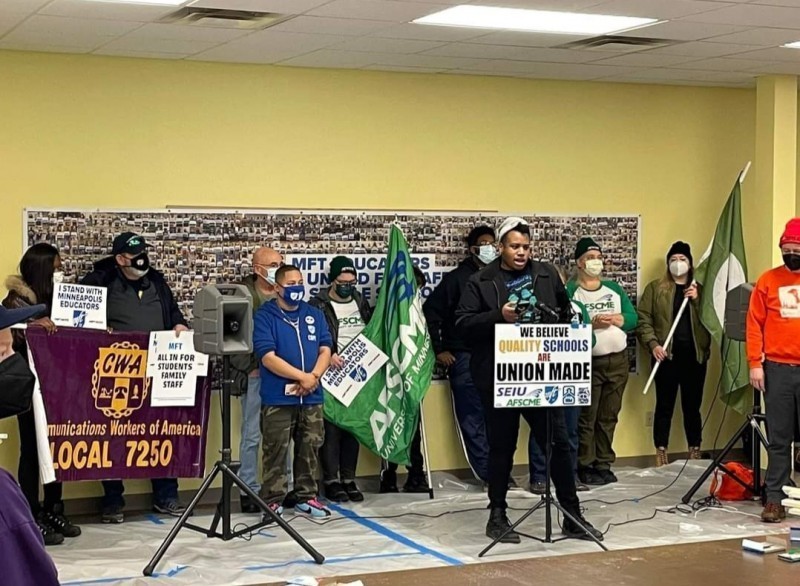 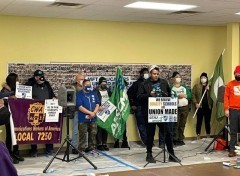 Minneapolis, MN – On Saturday March 5 rank-and-file union members along with parents, teachers and students held a press conference in support of the teachers, education support professionals (ESPs) and education assistants who will begin a strike Tuesday in Minneapolis and Saint Paul public schools.

The press conference was organized by Minnesota Workers United (MWU) which is coordinating community and labor support for the strike on the Minneapolis side of the river, and also stands in support of the Saint Paul educators. Minnesota Workers United are rank-and-file union members who work to build a fighting labor movement through things like strike support, fundraising for strikes and organizing labor and community actions both in support of strikes as well as around broader community issues that affect the working class.

Some of MWU’s more notable previous actions have included things like a large rally downtown Minneapolis when the supreme court issued an anti-union ruling on the Janus versus AFSCME case which made public sector jobs effectively right to work, organizing a protest at Hennepin County Attorney Mike Freemans house in Minneapolis after the murder of George Floyd, a successful fundraiser and strike support event for the 2016 Minnesota nurses strike, as well as organizing strike support for the Saint Paul Federation of teachers when they nearly went on strike two contracts ago.

Along with MWU, the press conference featured participation by labor federations including the Minneapolis Regional labor Federation, the AFL-CIO, and Education Minnesota, AFSCME Locals 2822 and 3800, CWA Local 7250, SEIU Local 284, and more. Additionally, there were speakers from Twin Cities Coalition for Justice For Jamar, along with parents, students and community members.

At the press conference MWU released a sign-on letter in support of the Minneapolis teachers and ESP’s demands calling for a living wage for ESPs, improvements to attract and retain oppressed nationality educators, mental health supports for kids, smaller class sizes, and better compensation for educators. The sign on letter was signed by 47 organizations including the Minneapolis Regional Labor Federation and the Minnesota AFL-CIO.

On Sunday March 6 at 5 p.m. MWU will be holding a rally at the Minneapolis Public Schools building in support of the educators.