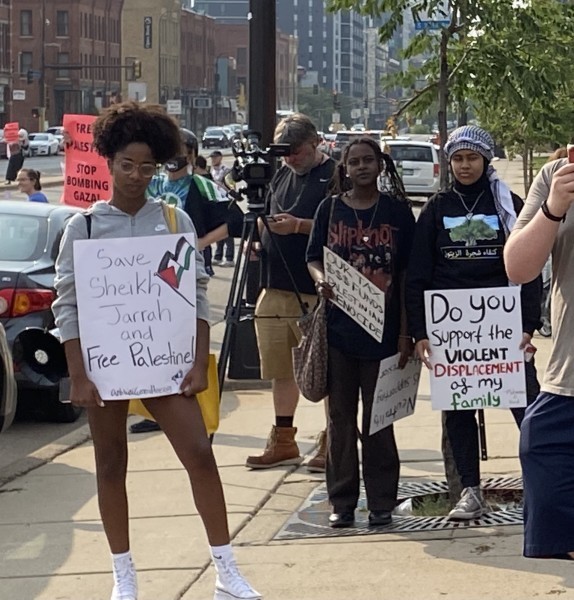 Minneapolis protest against U.S. support for occupation of Palestine.
(Fight Back! News/staff)

Minneapolis, MN – On August 5, 60 people gathered alongside Washington Avenue near Senator Amy Klobuchar’s Minneapolis office to demand an end of U.S. aid to apartheid Israel. The protesters stretched down the block with signs and Palestinian flags, greeting the rush hour drivers, who were overwhelmingly supportive and honking wildly.

The protest was called after Klobuchar, a ‘centrist’ Democrat, failed to respond to a petition signed by over 1000 of her constituents supporting the Defending the Human Rights of Palestinian Children and Families Living Under Israeli Military Occupation Act (HR 2590) which would prevent U.S. funds from being used by Israel for violence and oppression of the Palestinian people. Minnesota Representatives Betty McCullom and Ilhan Omar have supported the bill already in the House, and the petition calls on senators like Klobuchar to put forward similar bills in the Senate.

The first speaker, Autumn Lake from the MN Anti-War Committee, explained, “This year the movement in the U.S. for solidarity with the people of Palestine has reached incredible heights. Thousands of us took to the streets of Minneapolis and in dozens of other cities across the country in the wake of continued violence against Palestinians on their own land. This topic has actually started to become mainstream in U.S. politics. Politicians whose voting bases are even remotely progressive are going to be finding it unsustainable not to stand with Palestine as time goes on.”

The recent sea change in public opinion follows massive protests that erupted worldwide in response to the evictions of Palestinians from the East Jerusalem neighborhoods Sheikh Jarrah and Silwan, as well as a brutal Israeli attack on Gaza that killed 260 people, including 66 children. The overwhelming support of passersby during the protest was evident, but speakers urged cautious optimism and stressed the importance of resilience, staying vigilant and keeping up the pressure.

“I know that Palestine only makes national news when it’s being bombed,” said Sam Sanchez from American Muslims for Palestine, “but there have also been children who have recently been murdered. One of them is named Mohammed Abu Sara, he’s eleven years old. He was sitting in his father’s car when Israelis pulled them over for no reason. They were grocery shopping and trying to make it home. The Israeli army unloaded 13 bullets, one or multiple hit Mohammed Abu Sara, he was rushed to the hospital and then later died. This just goes to show you that they don’t care about Palestinian life, even if they’re children, even if they’re babies, they will continue to kill them.”

Many speakers acknowledged the fact that the protest took place on stolen indigenous land and drew connections between the ongoing fight for indigenous rights in the Stop Line 3 movement.

The protest was organized by the MN Anti-War Committee and American Muslims for Palestine MN, and was cosponsored by Women Against Military Madness (WAMM) and IfNotNow Twin Cities.