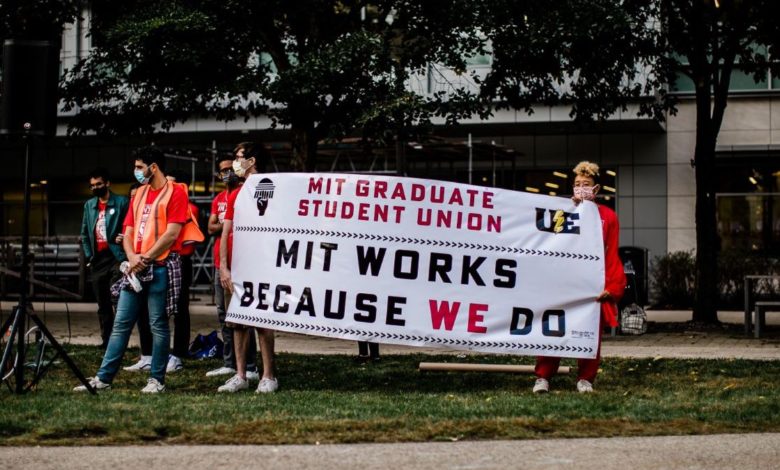 The MIT GSU held a launch rally that was attended by 1,000 organizers and supporters of the unionization effort. The crowd was peppered with graduate workers who wore red MIT GSU shirts. Some held placards and banners, while others walked throughout the area to assist other graduate workers in signing union membership cards. Emcees led the crowd in chants of “no excuse for grad abuse,” “what do we tell the corporation? No grad student exploitation,” and “union power!”

‘MIT works because we do.’

Several graduate workers spoke about their decision to unionize, citing a lack of access to affordable housing and benefits such as dental insurance, poor protections for international students, and poverty wages.

“The biggest issue I encountered here at MIT is seeing the overwhelming number of students here on campus who deal with mental health issues,” Lucky Pattanaik, a fifth-year graduate student worker in chemical engineering, told Liberation News. “After my first semester, many of my co-workers, fellow grad students had to deal with hospitalizations, had to take extended leave … Whether the lack of affordable housing or lack of healthcare, I’ve known several people who have had to drop out of the program because of that.”

“When you first get to graduate school, you are exposed to this whisper network of ‘don’t work for this advisor, he’s driven out every woman and queer person in his lab in the past three years,’ or ‘don’t work for this advisor, he harasses his female students,’” said Lucy Hu, a sixth-year PhD student in health sciences and technology. “Even if you are lucky enough to end up with an advisor who treats you with respect, at MIT as an institution — because you are constantly interacting with so many people in power — you’re not free from that harassment and discrimination.”

The GSU’s central slogan is MIT works because we do. When asked about how organizers respond to claims that graduate students are not workers, Pattanaik said, “We’re the ones who do the research. We’re the ones who often teach the classes. Many of my friends have had to write grants, bring in the actual research money. We do a lot of the labor at this university. I think MIT faculty and administration understand that we’re actually workers here. So it’s just a matter of making sure that we get the protections that workers deserve.”

According to U.S. News and World Report, MIT’s $18.3 billion dollar endowment is the fifth largest of any university in the United States. Many GSU organizers have been involved in prior organizing efforts to pressure MIT to use its resources to address the issues that graduate students face.

Hu said that these experiences were part of what caused her and other MIT graduate student workers to decide to form a union. “We’ve tried begging for change. The thing is when you beg for change, you leave the agency in the employer’s hands. You leave the agency in the boss’ hands. A union is us taking back that power to fight for those things we care about so deeply.”

Members from other local unions attended the rally in solidarity, including members of Teamsters Local 25; Brandon Mancilla, the president of the Harvard Grad Students Union; and MIT dining hall workers, who are members of UNITE HERE Local 26. Hu and Pattanaik expressed the need for solidarity between all workers on MIT’s campus and throughout the labor movement.

In 2016, MIT filed an amicus brief to the National Labor Relations Board with eight other universities arguing against graduate student worker’s right to unionize, and GSU organizers are anticipating that MIT will wage an anti-union campaign.

However, according to Pattanaik, support for unionization is high among graduate students. “You can see so many people out here today. I think we’ll be okay … At MIT, we often see ourselves as leaders in research, in innovation. But now we can hopefully be leaders in making sure that graduate students are treated fairly. We’ve followed so many unionization movements to get up to here, and hopefully other grad schools, other grad programs can follow in our steps … Hopefully it continues to grow the labor movement and bring it back in the U.S.”