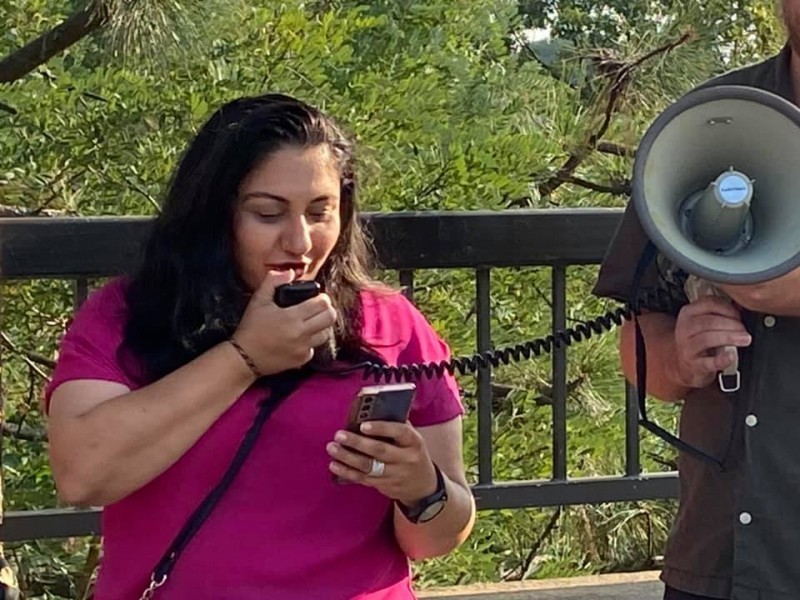 St. Paul, MN – On August 18, representatives from Twin Cities anti-war groups and the local Afghan community gathered at the Lake Street-Marshall Avenue bridge to hold a press conference on the unfolding situation in Afghanistan. The event was part of a weekly peace vigil organized by Women Against Military Madness.

Days earlier, the U.S.-backed Afghan government and Afghan National Army collapsed in the face of a nationwide offensive by resistance forces led by the Taliban, after the withdrawal of most U.S. troops from the country. The Taliban’s quick success effectively brought an end to nearly 20 years of U.S. occupation and returned the group to power for the first time since 2001.

This led to a chaotic situation at Kabul’s international airport, where remnants of U.S. occupation forces violently attacked crowds of Afghan civilians who hoped to flee the country, killing at least five.

Naweed Ahmadzai, a first-generation Afghan American born to parents who were educators during the first Taliban regime, spoke at the Saint Paul press conference. “No one has taken responsibility for the situation Afghanistan is now in, not even the president of the United States. And this was all while there were Afghans literally hanging from the wings of a U.S. plane as it took off, as we all saw. Now this is not on anyone but us. We must hold Joe Biden accountable, Trump accountable, Obama accountable and the ones before accountable,” he said.

Wyatt Miller of the Anti-War Committee criticized the U.S. government’s retaliatory seizure of Afghanistan’s foreign holdings, saying, “None of this will help Afghanistan. If anything the U.S. owes Afghanistan reparations for what it’s done. But at the heart of it all is sovereignty and self-determination, two things the U.S. needs to learn how to respect and value before it will ever be able to engage with the world as anything other than a bully and a predator.”

The press conference announced that on Saturday, August 28 at 4 p.m., the local Afghan community will hold a demonstration at Loring Park in Minneapolis to demand protection for Afghan refugees and for the U.S. to be held accountable for its destructive occupation.