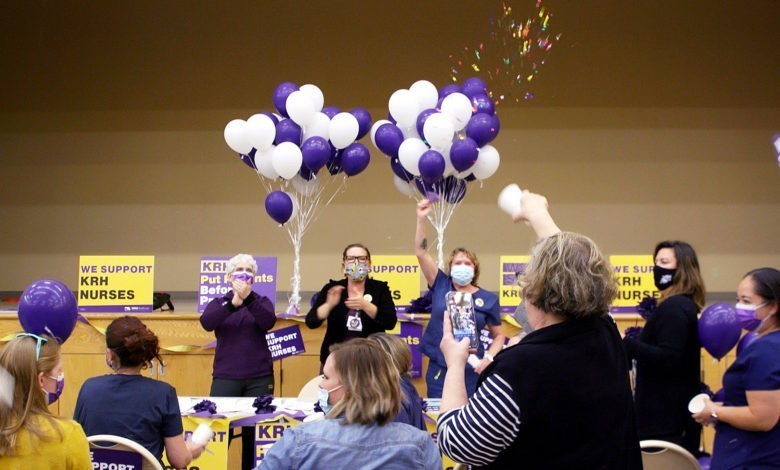 Nurses at Logan Health in Kalispell, Montana were already experiencing backbreaking working conditions when they unionized with SEIU 1199NW in 2019, just before the pandemic began. Even before the surge in patients the pandemic caused, they were concerned about not having enough staff to give adequate care to their community. Logan Health nurses wanted more input in staffing decisions, an increase in wages for their vital work, an improved grievance procedure and better benefits to bring in and keep nurses at Logan Health during a nationwide healthcare worker shortage.

Logan Health nurses remained united and steadfast to win these improvements in working conditions in their first contract. Union members ratified the contract by vote on September 16th, 2021. Members feel hopeful that this new contract will mean more time with their families and a better life for their children. The contract comes at a time when many Logan Health nurses are worried about being able to afford living in the increasingly expensive town of Kalispell where Logan Health is located.

Throughout unionization and contract negotiations, the Logan Health nurses emphasized the fact that better working conditions mean better patient care. Members said that with their new union contract, they feel renewed pride in their work knowing they will be able to better provide safe, quality healthcare.

This victory did not come without struggle. Logan Health nurses had to force the hand of hospital management to get the improvements they need to do their crucial work with dignity. They negotiated with stubborn, stingy hospital managers for 18 months throughout a global pandemic when Kalispell was a COVID-19 hotspot in Montana.

Hospital management pushed Logan Health SEIU 1199NW members to strike for three days in May 2021. Management risked the lives of hundreds of patients by refusing to give Logan Health nurses a raise in their contract. Yet, nurses knew that delaying care for patients during a pandemic for three days was unfortunately necessary to secure a fair first contract and ensure quality healthcare for their community.

Meanwhile Logan Health management repeatedly said demands for lifesaving raises for nurses were “unreasonable” as they spent $40 million on a new children’s hospital and budgeted about $1 million for a hospital rebranding campaign. In addition, management said they could not change staffing procedures to prevent nurse burnout as they decided to expand Logan Health into new communities, which requires the hiring of more overstretched nurses.

Logan Health management also engaged in a classic union busting technique, but SEIU 1199NW nurses called it as it was and stayed strong. Hospital management disgustingly tried to pit workers against workers within Logan Health by announcing almost $11 million in raises for all non-union employees. This was an obvious attempt to punish nurses for unionizing and to try to divide the workers. However, Logan Health nurses clearly saw this decision as hypocrisy and held firm. Management lied that they could not give unionized nurses a raise while they increased clinical staff’s wages by $4.5/hr.

The union-busting tactics of Logan Health demonstrate that employers will do almost anything, including making financial decisions that temporarily reduce profits, to make sure that workers do not build their collective power through unions. Management knows that a union means: an end to unilateral decision making without worker input, continuously better wages and benefits, and increased class consciousness among workers.

SEIU 1199NW’s victory in Kalispell, Montana is an inspiration to the working class struggle across the country. Logan Health nurses remained united and steadfast in their demands despite the ruthless union busting attempts from hospital management whose bottomline under capitalism is profit and maintaining power over the workforce no matter how many lives they put at risk. The 650 nurses at Logan Health fought for a contract they know will help their families and community. They are hopeful for the future of their union and that their struggle can inspire other nurses in Montana to consider unionizing.

Kshama Sawant: Solidarity with Union Carpenters in Their Fight For a Good Contract!

Worcester nurses: ‘We left as one, we go back as one’