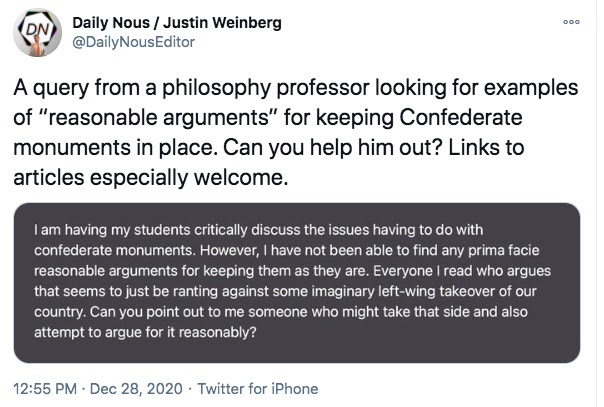 “Each generation,” Fanon wrote in The Wretched of the Earth, “must, out of relative obscurity, discover its mission, fulfill it, or betray it.” This quotation has been one of my maxims for years, a way to structure not only my activist/organizing work but also my intellectual labour as a philosopher. While it is indeed the case that every activist and organizer must necessarily abide by this maxim––to discover the mission of the conjuncture, as difficult as it might be, and to work to fulfill this mission rather than betray it––because this is what organizers do by definition, such a maxim is often lost on philosophers. Indeed, in more than a decade of blogging here I have written multiple posts on the delusions of academic philosophy. Even still, I am continuously struck by the ways in which philosophers cannot live up to this maxim by failing to discover their generational mission and thus, due to this failure, betraying it without even realizing the betrayal. Simultaneously, I am struck by well-meaning fans of philosophy who are not themselves guilty of this failure but who do not use this maxim as a rubric for judging thought.

If philosophy is about clarifying thought, and thus making sense of the world and our role in the world, Fanon’s maxim is one we need to take to heart. What does it mean to be a “critical thinker” or a “lover of wisdom” if you cannot think your time and place, the social struggles happening there, and your responsibility as an intellectual? After all, philosophers have historically prided themselves on the fact that their discipline is the pursuit of truth and so one would think that, at every historical conjuncture, philosophers that possess meaning as philosophers would be those who understand their role in thinking thought and what the world is and means in their time period. This is not to say that every philosopher must be an explicit social/political philosopher, but only that they ought to be aware that their labour does not happen outside of social relations. For example, I have fond memories of walking the picket line with logicians back in 2008/2009 who understood damn well what was at stake in the strike, and even brought their sub-discipline to bear upon arguments in GMMs, and did not retreat from social struggle because they were not “political philosophies”. When contrasted with their peers who refused to participate in the strike––who believed that the study of logic and the philosophy of math was somehow disconnected with making a living wage and helping those who were less well off––it was clear that they understood that even the abstractions of the philosophy of logic were not disconnected to the social struggles of life in general. (In fact, some of these logicians, who had only just encountered political struggle in the moment of the strike, were even better than “Marxists” in political science who thought the strike was “going too far”!)

So how do we deal with philosophers who chose the wrong side historically, might even have contributed to the wrong side, or just refused to choose sides and just get along with horrendous political situations? Largely mainstream philosophy tends to sideline these questions, present philosophy as being outside of history (or, as Althusser says, “without a history”) and expect us either not to care or separate the thought from the person. But I’ve always been of the mind that the sidelining of these questions is anti-philosophical since it is a betrayal of thought. If philosophy is about critical thinking and clarifying the meaning of thought, then philosophers who failed to care about their historical conjunctures, not to mention those who sided with predatory class power and/or even helped ruling class ideology, should be treated as guilty of betraying their generational mission. Largely, just as Sartre and Beauvoir argued about Camus and his failure to side with the Algerian revolution, such philosophers should be seen as intellectually worthless.

Which is why I have found the philosophical cult around Heidegger, to cite one very obvious example, extremely odd. Since he was incapable of philosophically understanding why Nazism was heinous––even worse he saw his philosophy as part of the Nazi project––then we should recognize that, because of this impoverishment in his thought, there is something deeply wrong with the philosophy he produced. We can say the same for Hannah Arendt, despite whatever steps she took to distance herself from Heidegger’s Nazism, because her reflections on the human condition happened simultaneously to her refusal to support even the reformist currents of the Civil Rights movement. (Seriously, what kind of “critical” social philosopher writing at that time, who fled Nazi Germany, could ever oppose desegregation actions and dare to call herself a critical thinker?) Then there is Gadamer, still beloved by those who study phenomenology and hermeneutics, who might not have been a member of the Nazi party (as Heidegger was) but who never opposed fascism and even accommodated himself to fascism so as to maintain a job. What sort of worth do these philosophers have as philosophers if they cannot even grapple with the prescient questions of their historical conjunctures beyond dismissal, avoidance, or an outright betrayal of thought? The list goes on: these types of philosophers are everywhere, and they are ultimately worthless as thinkers. And yet some of them are still celebrated!

Moreover, part of the bourgeois philosophical project is pretending that it is the apex of “critical thought” to keep considering vacuous positions as meaningful. No matter how many times we tell our students that philosophy and critical thinking is not the same as grade school debate club, philosophy keeps embarrassing itself by degrading itself to the level of debate and an asinine notion of free expression. Take, for example, this tweet by Daily Nous where a philosophy platform is asking philosophers to find strong justifications for racism! Maybe the fact we can’t easily find reasonable arguments defending Confederate monuments should inform us that there are no reasonable arguments for the persistence of these monuments. In fact, any amount of critical thinking and historical investigation would reveal the meaning behind the existence of such monuments. But some philosophy professor really wants to find a strong argument defending the memorialization of slavery and Daily Nous is there to help them out! They really do want to reduce philosophy to some mundane debate club despite the fact that even Plato maintained that truth and opinion were not identical. Here I am reminded of Badiou’s comment that philosophy is simultaneously democratic and non-democratic: it is democratic in the sense that everyone can be a critical thinker; it is non-democratic in that all claims and ideas are not “equal” because opinions can be wrong. But mainstream philosophers sure like to take up the notion that philosophy classes are just a debate club, that we should tolerate erroneous opinions and even find ways to justify them, and here we are.

The point, here, is that the worth of philosophers should also be gauged on their ability to actually think their historical conjuncture. The claim of philosophy is that it teaches critical thinking, but if it cannot even think itself through its time and place then what worth does it have? If a philosopher cannot think the thought of their social and historical context then what meaning does their philosophy have? Not very much.