My God, My God, Why Hast Thou Forsaken Me? 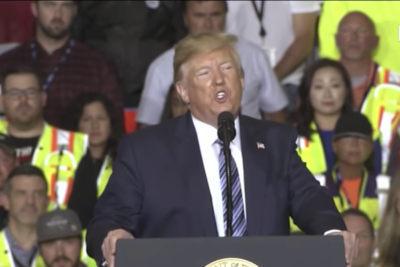 You’ve stood by me through everything. You didn’t flinch when I grabbed them by the pussy. When I revealed that Obama was born in an African shithole country, you nodded approvingly. When I pointed out that rapists, child-molesters, and drug smugglers were sneaking into Texas, you had my back. When I told my people to unmask, and urged their sluggish doctors to slice them open, slosh their insides with bleach, and stick them in tanning beds, you were right there with me. Even back in 2017, when I signed the God-given right of crazy people to express themselves with guns, you knowingly smiled from above. And you were okay with me when I promised little Zelenski that I would give him the money if he just gave me the goods on that crack-head Hunter Biden. Look, you’ve never wavered through anything I’ve done for you. When I implored the faithful to retake the Capital, it was with your blessing. I mean, give me a break; you were even with me when I approved the itinerary for Mike Pence’s visit to your kingdom. So, why now; why after all we’ve done together are you now forsaking me? 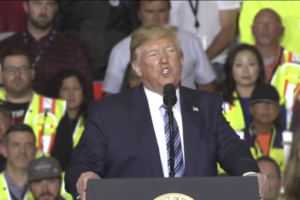 Why shouldn’t he feel like a pitiful, discarded lover? Why shouldn’t he be skulking through the gloomy corridors of Mara Lago at three in the morning, howling at his abandonment? Really, there he stood, hardly more than a few months ago, not merely elected by a record-breaking crowd of patriots to be president of the United States, but anointed by God to be his chosen emissary! If maybe a bit too modest to have actually claimed the mantle himself, he wasn’t so faithless as to have denied its possibility. “I hope it’s true,” was his almost reluctant conveyance. While Trump was humbly disinclined to assertively claim deification himself, there were plenty of staunch and influential devotees willing to do it for him: Sarah Sanders, Rick Perry, Nikki Haley, Mike Pompeo, Robert Jeffress, Franklin Graham, Mike Lindell, Paula White, and Stephan Strang were only some of the visionary dignitaries who declared its obvious truth. Big name luminaries weren’t alone in seeing the hand of God in Trump’s election; millions of unheralded followers knew beyond doubt that Trump was on a divine mission.

But where are they now, in his hour of need? Why does it all seem to be slipping away from him? One by one, so many of the devoted are turning their backs. Even worse, some appear to be openly conspiring against him. And it’s not just the salt of the earth; God himself seems to be sidling away. How can that be? Really, if jilted like that, who wouldn’t be howling? It’s like one day you’re manna from heaven, and the next day you’re yesterday’s milk toast. Why now? Why the slip-sliding away at this particular time? He’s the same as he ever was, perhaps even more so. Shouldn’t that be considered a good thing? So, what in heaven’s name is going on with the faithful? What in heaven’s name is going on in heaven?

As it so often happens, the Evangelicals were the first to get the message. Admittedly, they are pious and have the world’s best antennas for receiving transmissions from God. They often hear and act on God’s word before many of us even realize there’s been a message. The word apparently came down to the attentive while some of us were still transfixed on the image of Trump’s anatomical power grab. The most faithful of the faithful were not so luridly preoccupied; many Evangelicals (and perhaps a few Catholics) got it immediately: Donald Trump was chosen by God. From that very first moment, as Donald and Melania floated down the silvery staircase, the faithful knew Donald was the man picked by God to do what needed to be done. And that’s the way it was; for more than four years, all was well in the kingdom. God smiled down upon him and the truly faithful applauded as Trump plied the endorsement that he humbly hoped was true; knowingly (or perhaps unknowingly) doing whatever it was that God wanted done.

But now, some of the faithful are drifting away. Many appear to be gravitating towards someone in Florida who doesn’t reside at Mara Lago. The exodus begs asking: Was Trump really chosen by God? If he was God’s chosen facilitator, shouldn’t God and the faithful still be hanging in there with him? If, on the other hand, he never was really chosen by God, why would so many of the Lord’s faithful have claimed to know that he was? Were they pompously talking through their halos? Or, could they have gotten it all wrong in some guileless way? Could it have been a fake message from an imposter (like maybe from the guy down under)? Or, could it have been a message from God that was innocently misinterpreted? Could there have been a communication in the message that was somehow garbled – perhaps by a host of 5G towers or maybe a dense swarm of locusts? Or, could it possibly be that he had been chosen for a little while, but was now officially and divinely unchosen? Might it be that his multi-year stint was really just “The Ultimate Job Interview,” and God was now stepping in to say, “You’re fired?”

Be that as it may, some of the big luminaries who absolutely knew and proclaimed that Trump was chosen by God to do what needed to be done, are now trying to position themselves to take over whatever it is that still needs to be done. Does God know about this? If the ambitious upstarts were truly convinced in 2016 that Trump had been chosen by God, shouldn’t it be seen as somewhat ungodly for them to now conspire against him? Or, have Mike Pompeo, Nikki Haley, Ron DeSantis, and all of the other faithful challengers gotten a new message that releases them from the first? Were they told that each will now be a God-approved contestant on the next Apprentice Show, or do they just “hope that it’s true?” Being that no Democrat or demon from hell is allowed in its production, will the contestants who eventually become unchosen, graciously accept the “You’re fired!” at its end? Pray that it’s so; God forbid there be a siege upon the Pearly Gates.

It’s still far from over, but Ron DeSantis appears to have the inside track on getting the next backing from God. His campaign ad unabashedly claims that Ron was sent to Earth to be God’s fighter, to take upon himself the arrows of the evil doers as he bravely fights to protect the rights of the righteous. Not one to be outdone, Trump has put out his own amazing ad, depicting himself as a marvelous superhero that destroys the arrows of the evil doers rather than merely taking them on. But is he now just a superhero, or does he also fight evil with God still in his corner? If indeed Trump is still chosen by God, and has also been granted superpowers, it would surely give him an edge over DeSantis who appears to have the approval of God, but without anything like Trump’s laser-vision to aid in the fight. So, while seemingly with an advantage, how come Donald seems to be losing it? Why are so many of the faithful shuffling towards Ron? Is it too much of a stretch to suspect there might be more “image” and less “God” finding its way into the divine message than was previously thought?

It’s not slanderous to suggest that neither Ron nor Donald are nice guys. “Niceness” is not an image that either seeks to project. In fact, the opposite is true; both proudly flaunt their meanness as if it’s an asset. Of the two, Trump has the longer history of meanness, but DeSantis’s meanness might enjoy an advantage in being perceived as more authenticity. Sure, Trump has had years of displayed nastiness towards women, minorities, and captured soldiers, but his meanness sometimes appears unintentional, like it’s the means to an end, rather than an end in itself. It’s not like he fakes the nastiness; it’s really there, but if allowed to bypass it, and still express his narcissistic and selfish nature, it seems possible that he possibly could. DeSantis however, appears like the real deal with meanness; he goes out of his way to be mean, as if it gives him a warm and fuzzy feeling inside all by itself. Recall how he went all the way to Texas to herd a group of desperate, asylum-seeking refugee families onto a plane, and dumped them unannounced in a faraway northern village. Like, how mean, and out-of-the-way was that? He’s even okay with being mean to kids: Not long before his Texas jaunt, in front of TV cameras, DeSantis ridiculed a hapless group of school children, admonishing them for wearing their “useless” COVID/Flu masks. Meanwhile and elsewhere, still in mean-mode, the governor was demanding that LGBT children (and adults) put on their “useful” hetero masks to prevent the spread of their gay virus into the righteous (but perhaps immunocompromised?) straight community.

So, does his authenticity now get God’s stamp of approval? Is DeSantis mean and intolerant enough to be recognized as God’s chosen emissary by the Evangelical community? Is he adroit enough to avoid the heat-vision power of an angry and vengeful Donald Trump? Many of the faithful appear to think so as they edge ever closer to Ron. But stay tuned, it’s not over yet; anything can happen; the Lord works in mysterious ways, especially when choosing his politicians.

Vern Loomis lives in the Detroit area and occasionally likes to comment on news and events that interest him in whatever capacity available. Read other articles by Vern.

O Communist, where art thou?

O Child, Where Art Thou?

‘So Far from God, so Close to the United States’: Responding to Biden’s Buy-American Auto Rebates

“Previously Unknown Massacres”: Why is Israel Allowed to Own Palestinian History?

Weathering the Global Storm: Why Neutrality is Not an Option for Palestinians