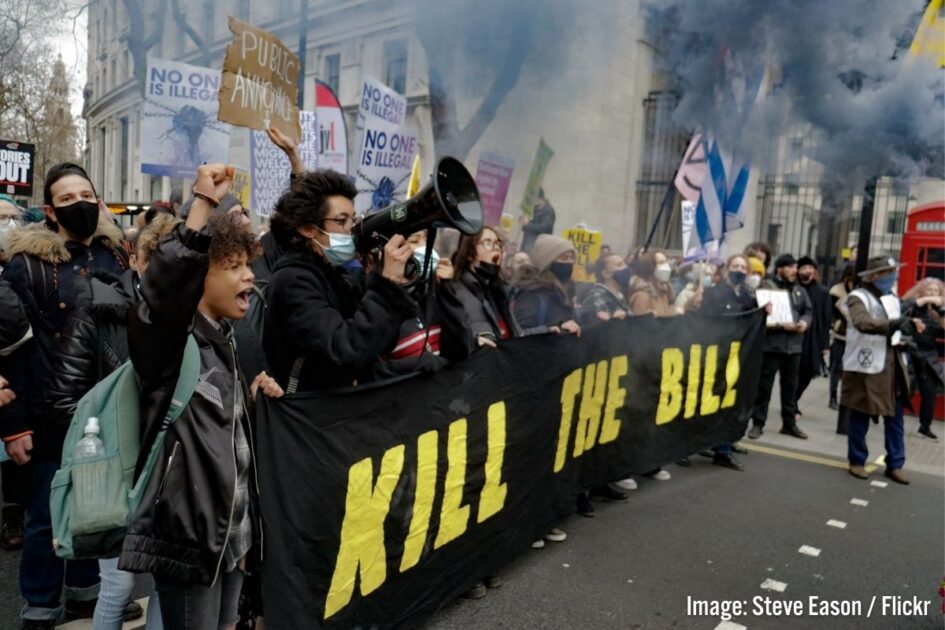 The Nationalities and Borders Bill, which passed through the House of Commons last December, represents another attack on the oppressed and exploited. The bill serves to further whip up nationalism and racism, which the ruling class relies upon to keep the working class divided.

Under this new law, British-born citizens who have dual citizenship could be at threat of having it revoked – without first being informed – at the whim of the Home Secretary. In fact, even those without a second citizenship, who the government deems to be ‘linked’ to another country, are at risk. This includes two-out-of-five non-white people in Britain.

This bill comes after the tragic news of 27 refugees drowning in the Channel, which the Tories have cynically used to bang the drum about ‘taking back control’ of the UK’s borders.

In response to this, the bill seeks to fragment the already difficult asylum process, by granting the protections of the 1951 Refugee Convention only to those that arrive in the country through so-called ‘legal’ means. But since the vast majority of refugees cannot reach Britain through ‘legal’ channels, they will face being ‘returned’ to whatever danger they have been forced to flee from.

Priti Patel has cynically claimed that this bill is meant to protect refugees against gangs of smugglers. She has said that this will clamp down on the ability of these smugglers to make profits off those in grave danger. But no amount of repressive laws or tough rhetoric will protect migrants and refugees.

The imperialists are both responsible for creating the chaos and danger that millions of people are forced to escape from; and they profit handsomely from refugees who survive the dangerous passage to Britain. 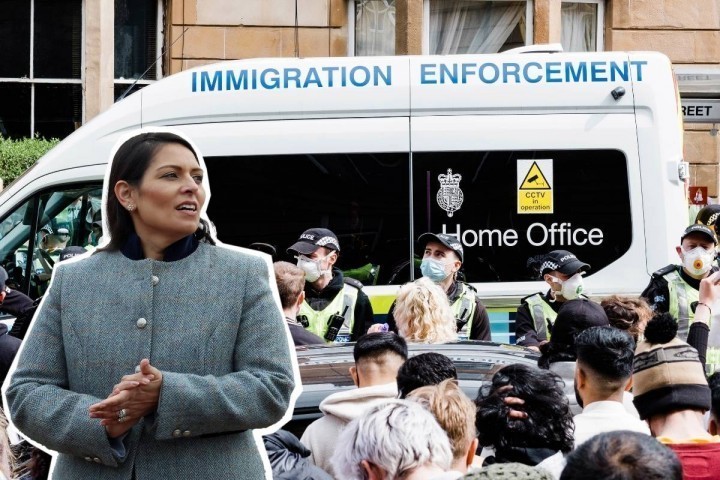 The whole bill reeks of ruling class hatred towards victims of war crimes and economic turmoil abroad, as well as disdain for minorities that consider themselves settled here in Britain. It is a continuation of racist policies that have unleashed fear and misery on minorities for decades.

As far back as 1981, under the British Nationality Act, a person’s citizenship could be revoked on grounds of ‘unacceptable behaviours’. But, we should note, this prerogative was almost never used. Yet since 2014, the Home Office has had the right to strip people with or without dual citizenship of their right to British citizenship, even if this would leave them stateless.

Patel’s Home Office has drastically ramped up the amount of British citizenships revoked in the last two years, with around 100 a year since she came into office. In the years prior, this figure was around a quarter of this amount.

The controversial clause nine of the bill – which is being debated in the House of Lords at the time of writing – gives the government powers to revoke citizenship without any warning. Rest assured, the Tories inform us, they will not make anyone stateless, and this will not affect the right to appeal.

Yet the legislation presided over by this government has already ensured that someone can be left stateless – de facto stripped of the most basic human rights. This new clause will place Britain in pole position as the only country able to leave citizens stateless without notice.

The idea that the ‘right of appeal’ is left intact is a cruel joke. How can you appeal your citizenship when there is no due process; when there are no checks or balances in place? Instead, a person’s basic rights are left at the mercy of a single individual, the Home Secretary, who has made a name out of scapegoating and marginalising minorities.

Human rights campaigners Reprieve have reported that at least 63% of adult British women in Syria are trafficking victims. Under this latest reactionary legislation, there is no doubt that the Tories will wash their hands clean of these suffering women and their children.

This is an all-out assault not only on the rights of refugees, but of trafficking victims also. Patel’s Home Office clearly believes that there are second-class British citizens who, if push comes to shove, belong somewhere else in the world. 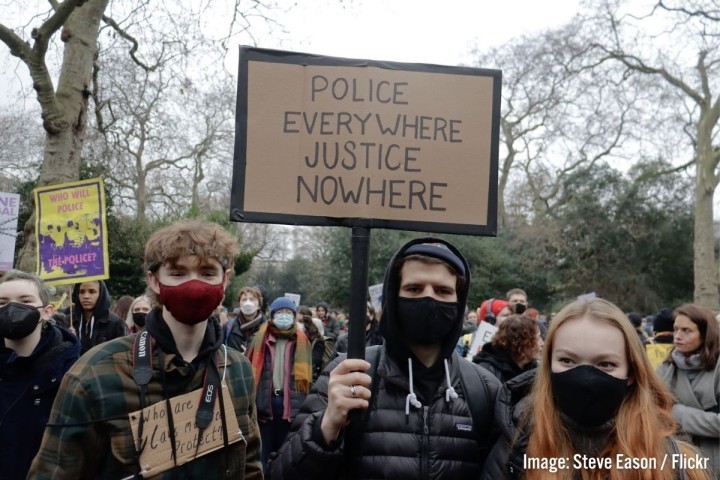 This bill is centred around the crude euphemism of removing the citizenship of those deemed a threat in some vague way to ‘the public good’. But the idea of such a public good – one that traverses class lines and interests – is a fiction.

But the Windrush scandal was certainly not a one-off. Everything Patel has done as home secretary shows the schism between what is ‘good’ for the rich and powerful, and that which is in the interests of the majority.

Patel presided over the new Crimes and Policing bill, which in the wake of a young woman – Sarah Everard – being killed by an active police officer, gave the police even more powers to act without recourse.

Patel has told the police to stamp down any protest which looks like it is working. And she has further extended stop-and-search rights by the police, meaning that anyone the police don’t like the look of – mainly young black men – can be treated as a criminal at first sight.

This is a serious attempt to bolster and enhance the institutions of the state, by hardening the repressive powers at the government’s disposal, and by allowing its agents to ruthlessly pursue their aims carte blanche. Naturally, this is not conducive to the good of the majority. 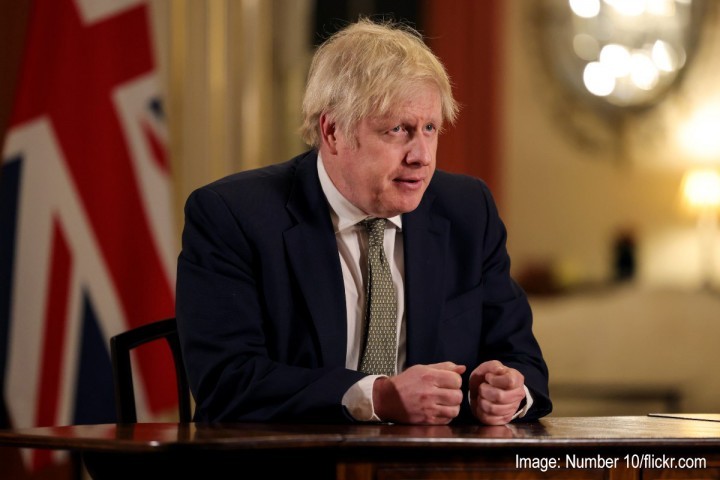 With characteristic insincerity, Johnson has pointed towards the ‘diversity’ of his Cabinet to prove why this new bill simply cannot be considered racist. Far from demonstrating the PM’s cynical point, this argument only tells us that looking at people’s skin colour over their class ideas and interests is no answer to the oppression and marginalisation that minorities face.

The rest of the Tory leadership has fallen in step, trying to fan the flames of their ‘culture war’ as a means to cut across rising class struggle and unity. Once again, the working class of all colours is being baited into fussing and fighting amongst ourselves.

With protest movements over climate change, racism, and violence against women rocking the British establishment in recent years, it is little surprise that the Tories are maneuvering to stamp out the actions of workers and youth who are demanding change.

The Tories are attempting to stem the tide of struggle that lies ahead; to tell a significant minority that their citizenship is a luxury, not a right, that can be relinquished if one dares to rock the boat too much. ‘Just accept your lot and keep your head down…or else’ seems to be the message.

We need only think back to the right wing’s public shaming of Shamima Begum – a vulnerable teenage girl who was groomed by Islamic fundamentalists, and later stripped of her citizenship by the government. Ghislaine Maxwell, on the other hand, a woman who groomed young girls for the rich and powerful, has been allowed to keep hers. The hypocrisy is nauseating.

We should be under no illusion that this bill is about keeping ordinary people safe. In reality, it is about keeping the capitalist class safe from any opposition. If anyone threatens the power, profits, and privileges of the ruling class, the government will have no problem using this bill against them. 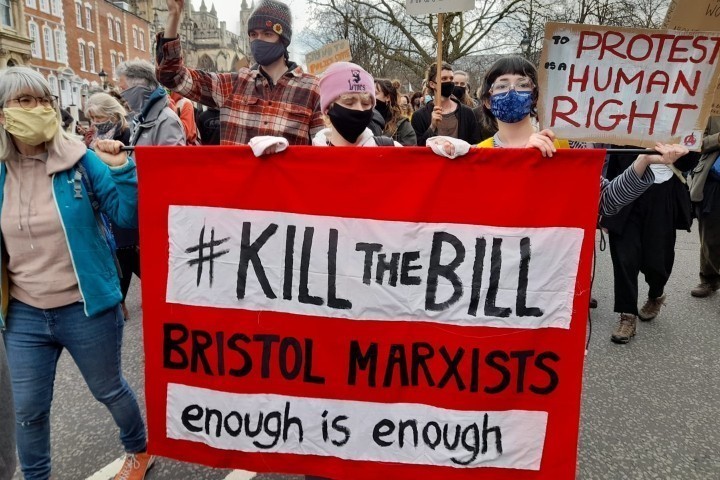 In order to fight this menace – which is intended to marginalise British citizens and scapegoat refugees – we need a campaign against all power-grabbing opportunities by the capitalist class.

For many, this bill proves the fear that many felt before: that our hard-won democratic freedoms remain fragile; and that basic rights can always be rebuked under the capitalist system.

One Momentum activist recalled the story of his father who, after moving to Britain, never gave up his Bangladeshi passport, as he was never completely sure that the authorities wouldn’t send him back to Bangladesh.

At the same time, we are once again seeing that the Labour Party, under its current leadership, is no vehicle to combat the Tories and their repression.

Starmer, after staying silent on this bill, has even backed the knighthood of Tony Blair – a man who is responsible for millions of people having to flee their homes in other countries. It is not difficult to see whose interests Starmer serves.

Despite this failure from the Labour Party, this latest reactionary bill has not been ignored. Those on the genuine left are picking up on the horrific nature of this bill and are fighting back.

Social media has been awash with those explaining the implications of the bill, as well as drawing light to how this ties into the long and sordid history of racism and imperialism in Britain. Petitions have been signed by many, and protests have been organised.

But we cannot fight this as a single issue, nor can we fight it alone. Workers and youth must come together to say not only that refugees are welcome here, but that the working class must unite and fight to take power into its hands, in order to put an end to the racism, xenophobia, bigotry, and jingoism that capitalism spawns.

Boris Johnson’s days may be numbered. But he and his capitalist backers are desperately doing everything to increase their own power. This is not a sign of strength, but of weakness.

Workers and youth must reply to show their strength, by organising and rallying around a bold socialist programme capable of transforming society in the interests of the vast majority. We urge you to join us in this task.

Poland-Belarusian crisis: down with imperialism, borders and barbarism!

Teachers in the Trenches—What’s Behind the Attack on Critical Race Theory?