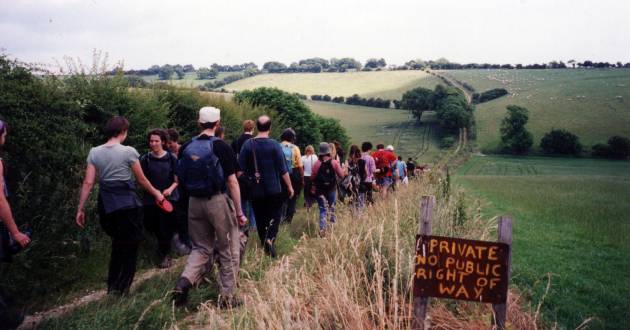 Dave Bangs makes the case for universal freedom to roam, and explains why he will be joining a mass trespass of England’s South Downs.

We are living through an onslaught upon nature which has no parallel in human history, and indeed no parallel since the ‘Great Dying’, the Extinction Event at the end of the Permian geological period 250 million years ago.

That extinction event killed the great majority of all life forms. Today, we are seeing the unprecedented impacts of a socio-economic system – a system which requires continuous growth, never-ending enclosure of land and extraction of resources, and the violent policing of environmental defenders who are standing up against ecological destruction.

Nature forms the inescapable matrix in which we all live and from which we take our sustenance, and our joy.

Yet the capitalist system which drives our world has also driven a gigantic separation and alienation between the great majority of people and nature. It has emptied the countryside of land-based labour, and driven us into towns, cities, and now giant mega-cities, in which we are almost entirely separated from nature. People are made to feel unwelcome and alien to the countryside – especially those who are racialized, working class, or with disabilities.

It is fundamentally wrong that 92 per cent of all of England’s land and 97 per cent of its waterways are off limits to the general public. We are campaigning for a universal Right to Roam so that everyone can have access to enjoy and protect the countryside.

If the processes inevitable under capitalism are destroying nature, then what are the social forces that can stop this process?

Those social forces can only be made up of those who least benefit from, and are most damaged by capitalist exploitation and the destruction of nature – that is, the great majority of us who work to survive, who have to sell our labour power through formal or informal economies, who have been dispossessed from the land.

Yet in our cities and mega-cities, we are the most separated, the most alienated from nature – far more so than those privileged people who have now colonized the UK’s countryside as their leisure landscape and shangri la.

We thus live in a painful paradox. We – the 99 per cent – have the potential to stop the destruction of nature. And yet our alienation from it hamstrings our ability to perform that historic role.

And this is where the issue of the right to roam becomes much more foundational, more important than even for enriching our wellbeing, our mental and physical health, and our individual lives – regardless of how critical all these are.

If we cannot be present as nature’s guardians, whistleblowers, advocates and defenders, then nature has no chance.

We must have as our objective to move beyond the culture which says we must stay confined to ‘national trails’, or existing rights of way; national parks or country parks; publicly open nature reserves, farm parks and petting farms – often accessible only by payment of an entry fee.

Because as long as we stay confined to those nature hot spots, fenced off from most of the natural landscapes around us, ecocide continues to take place elsewhere, and we can do nothing against it. Worth Forest near Crawley in Sussex is only one example – fenced off from the public, landowners bulldozed ancient forest vegetation of heath and marsh in 2017, without environmental assessment or planning permission – or anyone’s knowledge.

The river Ouse that runs through Lewes is another example – as the river is off-limits to the general public, it took acts of free-walking (‘trespassing’) to discover the invasion of Asiatic clams,
a highly invasive mollusc that causes havoc in river systems across Europe. The lack of a wide public presence has served to allow that invasive species to settle and grow over a large stretch of river wholly undetected.

On our Brighton Downs, local people are going through a major government-led public consultation on the future of the 13,000 acre Council-owned Downland Estate.

We have been asked to express our opinions on the management of large areas of downland over which we have no right of access and have no community-wide knowledge.

When ‘Friends of The Brighton Downs’ made a film about this estate last year to inform this consultation we were obliged to trespass eight times merely to film those huge stretches over which we had no right of access.

Knowledge of those places is a prerequisite for our power and effective collective control – we cannot look after what we do not know.

During that ‘free walking’ we discovered that one farm tenant who had no shooting rights had erected a pheasant release pen and all the paraphernalia of game bird shooting – feed hoppers and seed crops – entirely behind our backs. This was less than a mile from urban Brighton, and only a quarter of a mile from a fragment of statutory access land, protected by a ploughed and bulldozed expanse of forbidden arables, where in our grandparents’ time there had been ancient turf and furze.

So much to gain

Back in 1998, when a local farming family started ploughing up parts of two nationally protected sites – on Offham Down and Offham Marsh – the public mobilized both locally and nationally to avert their ecocide.
Over 250 people turned out from as far away as London to trespass on a Sunday afternoon on Offham Down to ‘unplough’ the chalk grassland – rolling back the ripped-up turves to stitch back its mantle of ancient herbs and grasses. Our responsibility to protect and defend nature over-rode the private property rights. And we won.

And we will win again if we grasp the public’s new anger after 16 months of closed doors and lockdowns, especially after the upsurge of anger at impending extinction and climate catastrophe that has lifted public consciousness across the world.

Our recent experiences in the movement for a universal access right tells us that though our militancy, we won the case for a partial right to roam when the Countryside and Rights of Way (CROW) Act 2000 was enacted. But we could have won much more.

Only three years after the passing of the Act, the new Scottish parliament passed a universal right to roam – based on the Scandinavian model, which allows ‘Freedom to Roam’ in the countryside with the exception of private gardens, near a dwelling house, or land under cultivation. And though the cultural differences between Scotland and England are significant, we must chiefly look to our own limitations and mistakes, for our own access movement has historically and currently been dogged by timid gradualism.

Our experience also tells us that we did not win as much as we thought we did, for the process of implementation of the partial right to roam in the CROW Act 2000 was, and is, often held back and sometimes stymied by local and national state officials, farmers and landowners, and conservative access workers.

History teaches us that gains that are made by a movement’s most radical and energetic elements are then halted, becalmed and even reversed by their implementation in the hands of local officials and small ‘c’ conservative local activists. We must not get bogged down in local and site-based concerns. We are only strong when we are part of a broad movement of all the exploited and dispossessed. We must always see our actions as part of a national and global project for the building of the alliances necessary to remove ecocidal capitalism and halt the destruction of our natural world.

And we must never lose sight of the reality behind all our concerns, which is that the Earth is a common treasury. The land is ours!

Join us on 24 July for our mass trespass, a day of walking and picnic in the downs.

David Bangs is a field naturalist, conservationist, and activist for the right to roam in Sussex and beyond. He has written three books: Whitehawk Hill: Where the Turf meets the Surf, a landscape history and natural history of Brighton’s most remarkable Downland survival (2004), A Freedom to Roam Guide to the Brighton Downs: from Shoreham to Newhaven and Beeding to Lewes (2008) and The Land of the Brighton Line: A Field Guide to the Middle Sussex and Southeast Surrey Weald (2018). He has been free walking the Sussex countryside for over 60 years.