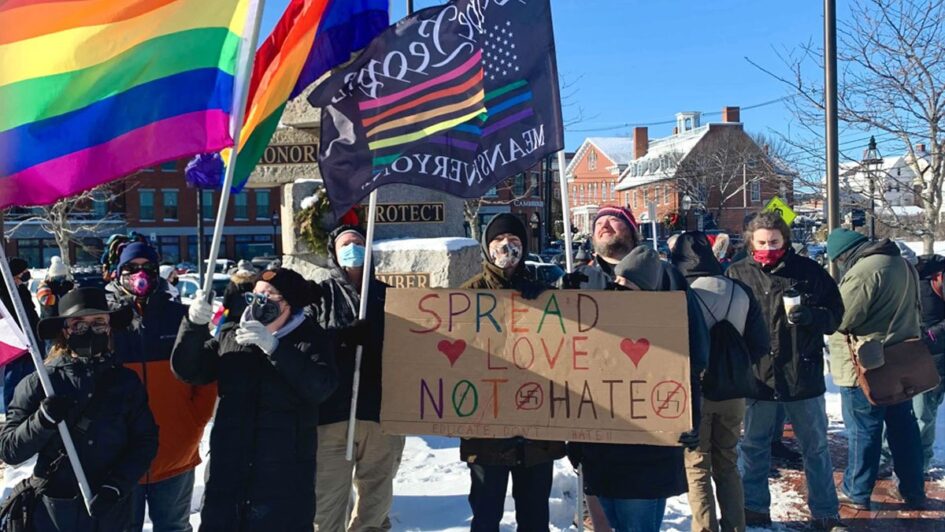 About a dozen men wearing all black representing NSC-131 marched over the border from Maine into Portsmouth on Dec. 18 to stand outside the Seacoast Rep holding a banner that read “Drag queens are pedophiles.” They were also seen giving Nazi salutes. On Dec. 20, the Seacoast Rep posted about the incident on Facebook adding “They passed out flyers spreading misinformation about homosexuals, AIDS, sexual deviancy, and Jewish people, including photos of members of our staff.” Days later NSC-131 returned and filmed themselves tearing down posters that the local community had put up in support of the Seacoast Rep.

In response to these attacks, there was an outpouring of support including in the form of donations especially from the Seacoast community and even internationally with messages of solidarity coming in from as far away as Australia and Japan. The Rep’s co-director Brandon James told News Center Maine “We’re not going to close up our shutters, and we’re not going to roll over and let these men repeat history.” The next Honey Punch & Pals performance would go on unintimidated. It was a sold out show.

Activists and members of the Portsmouth community, primarily from the art scene and local synagogue, showed up in support on Saturday, Jan. 8. The crowd began to gather at 9:30 AM, an hour and a half before the performance began. About 50 supporters rallied in solidarity at Portsmouth Memorial Park, a few hundred feet from the theater, waving pride flags and signs with slogans such as “Spread Love Not Hate.”

“I wanted to come out because I think it’s important to take a stand for the values that I believe in, like inclusion, and love, and people being themselves and finding a safe space to be themselves. And to take a stand against values that I think are abhorrent or positions that I think are abhorrent, like hate, intolerance and nazism,” Catherine Moran told Liberation News. “The arts community in Portsmouth is a gem and it’s thriving. It was thriving before the pandemic and it’s certainly taken a hit, but that’s another reason why we have to make sure that if Portsmouth is going to be the community we want to live in, we have to support it, in good times and in bad times. And these are bad times.”

Matt Hannifin said “We’re a very progressive town, at least I think so. Arts are definitely very important to us. But it doesn’t matter if we’re an arts town or not, there’s no room for neo-nazis, there’s no room for hate in any town in America or the rest of the world for that matter. Stop the hate!”

Kari Stevens from Fremont, NH told Liberation News, “I’m a part of the LGBTQIA community here in the north Seacoast. I have friends and family who not only work as drag queens but work specifically in this theater… We don’t have room for nazis. Neo-nazis go home, and don’t come back!”

NSC-131 made threats of violence toward the Jan. 8 demonstration on their internet forums, but ultimately none showed up. As Moran told Liberation News, they must have thought that “puppets are an easy target.”