NDFP-Bicol: Statement On The International Day of the Desaparecido 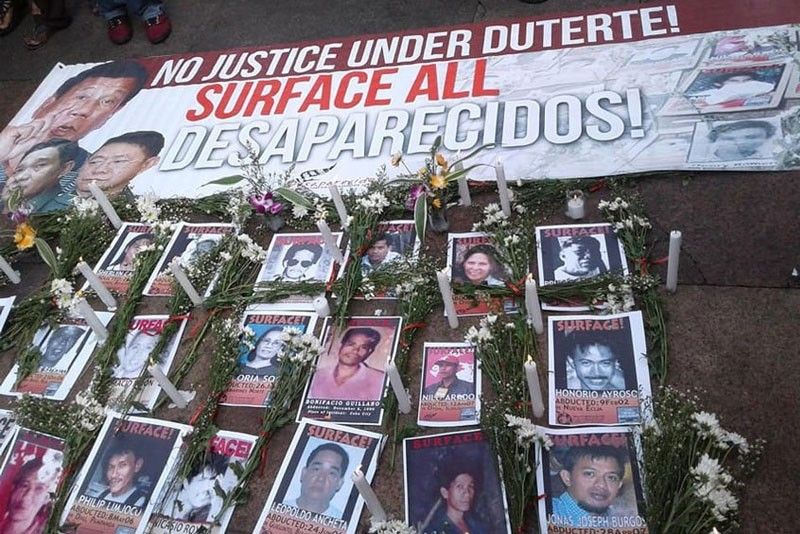 One cannot explain the pain of someone who lost a loved one. No cadaver to prove that he or she is gone. No grave to mark where he or she was laid to rest. Uncertain on whether he or she will still come back or not. This is the kind of immeasurable pain that every wife, parent, child or sibling of a desaparecido experience everyday.

NDF-Bicol, today joins in the commemoration of the International Day of the Desaparecido. The revolutionary movement salutes all progressive and nationalist individuals who were victims of abduction and enforced disappearance in the region and the whole country.

The violent abduction and enforced disappearance of suspected members of the revolutionary movement is a distinctive mark of the slaughterer that is Duterte. He employs all kinds of dirty and brutal tactics in order to gain much power, further enrich himself – even to the extremes of being called the king of death and violence.

In Bicol, there has been numerous victims of enforced disappearances since the time of Marcos’ dictatorship. The desaparecidos in the region are those who were the most courageous and persevering in advocating the interests of the people. They include Nona Sta. Clara, known scholar, social worker and teacher of the people who was abducted and disappeared along with Atty. Angelica Llnareses in 1989; farmer-leader Julito Potentado and 20 other peasants who were abducted in Lagonoy, Camarines Sur province at the height of Oplan Bantay Laya under the US-Arroyo regime. Also, during those troubled times, a cadre and commander – Rogelio “Ka Mading” Calubad together with his son Gabriel was taken and disappeared by members of the AFP.

This abominable practice is still continued by the fascist cohorts of Duterte. Under his regime, there has been four victims of enforced disappearance in the region. One of them is Ed Navalta, Camarines Sur People’s Organization coordinator who was forcibly abducted from his home in Ragay, Camarines Sur province on March 2021. Since then, there has been no clear news of his whereabouts nor his current situation.

No matter how many times they deny it, there is no one else behind the enforced disappearances of the likes of Nona, Julito, Rogelio and Ed other than the terrorist state who has been floundering to silence the struggle of the people and stem the advance of the revolutionary movement.

But the interminable destitution and the insoluble crisis brought about by a semi-feudal and semi-colonial system of the Filipino society, that has been further degenerated by the US-Duterte regime, is the reason why the people have been unwavering in their actions and struggle. No matter how vicious the face of fascism they are confronted with, they will not stop until they have exonerated and made accountable those who have abused and exploited them.

No amount of violence will suppress the spirit of struggle of the Bicolanos or the people in rest of the country. The butchers can only kill, maim, abduct and disappear the body. The spirit of struggle remains vibrant in the hearts of each of the oppressed and exploited. This is further enriched and given life by the revolutionary movement who upholds the class interests of the people.

Together with NDF-Bicol, the united struggle of the Bicolano masses will frustrate and thwart the absolute suppression of their rights through the giant wave of the revolution.

Surface all the Desaparecidos!

Justice to all victims of Abduction and Enforced Disappearances!

Continue to advance the Revolutionary Struggle!