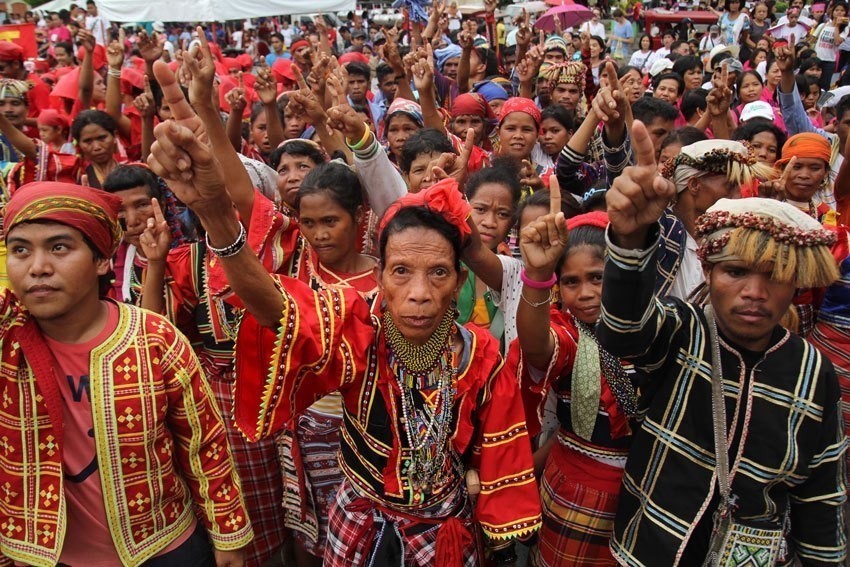 This International Day of World Indigenous Peoples, the National Democratic Front in Southern Mindanao stands in solidarity with the Lumad of Mindanao and all other tribes of indigenous peoples in the country. The revolutionary forces salute their historic heroic struggle for self-determination and defense of their ancestral land. For the Lumad of Southern Mindanao, whose lives and livelihood are perennially upended by imperialist plunder and state fascism, the most fitting way to celebrate today’s occasion is to continue to fight and resist the tyrannical US-Duterte regime.

In Duterte’s last State of the Nation Address, it is clear that more and more neoliberal programs and policies are slated to enable the wholesale and violent occupation of ancestral land and domains. In addition to the Build, Build, Build program funded by foreign borrowings, more useless infrastructure projects are being promised via the Barangay Development Program (BDP) of the National Task Force to End Local Communist Armed Conflict (NTF-ELCAC). Retro-fitted with the IP-centric counter-insurgency designs of Oplan Kapayapaan, these white elephants not only spurn the root causes of the Lumad’s destitution but has now become billion-peso milking cows for Duterte, his family, his mercenary generals and favored cronies.

For the past five years under Duterte’s draconian rule, the Filipino indigenous people bore the brunt of relentless economic and socio-political attacks in the form of forced displacement, killings, harassments, bombings of communities, terrorist-tagging, school closures, genocide, bigotry and others. In the more than three years of the implementation of the junta-like NTF-ELCAC, the AFP, PNP and their paramilitaries have consistently acted at the behest of the ruling class’ economic interests mainly because of the indigenous peoples’ opposition to mining operations, expansion of corporate plantations in their ancestral domains. The Anti-Terror Law has likewise exacerbated the state forces’ penchant to mobilize and weaponize reactionary agencies and institutions in the name of counter-insurgency.

The alarming plight of the Filipino indigenous people today therefore necessitates a broader and stronger united front to resist Duterte’s fascist and genocidal assault. The Manobo tribe of Southern Mindanao continues to fight the regime’s tyranny, deciding most recently to return to their ancestral domain in Pantaron mountain range amid clear and present danger to their lives.

We call on all revolutionary forces and allies in the region to mobilize to the cause of the Lumad struggle for self-determination and defense of their ancestral land. The New People’s Army remains the only army that protects the lives and livelihood of the Lumad and defends their interests. Red fighters, a considerable number of whom are Lumad themselves, continue to launch tactical offensives against legitimate military targets and their exploitative masters such as large-scale and foreign mining and plantation companies.

For decades, the Lumad and other Filipino indigenous people have come to embrace the national democratic revolution as the only means to attain genuine self-determination and defend their domains. Alongside the peasants and workers and other democratic forces, they resist in many different forms in order to break the shackles of imperialist dominance, feudal bondage and bureaucrat capitalism.