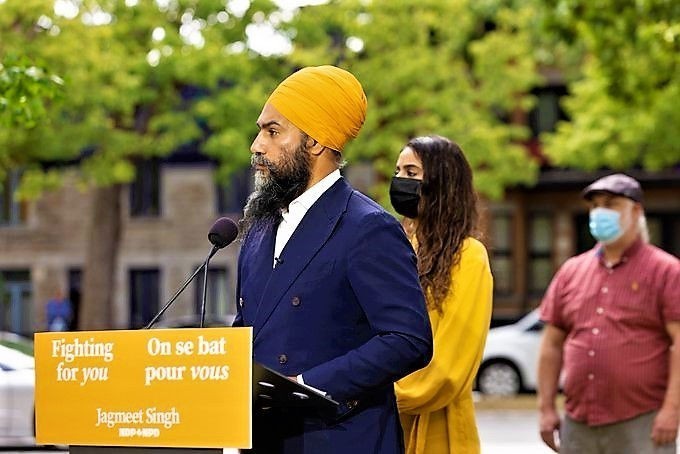 Have you heard the news?

Suddenly the NDP is concerned about the unbelievable, scandalous fiasco that is the Canada Emergency Wage Subsidy (CEWS).

The NDP would force companies that received pandemic wage subsidies at the same time as they paid dividends to shareholders or gave bonuses to executives to return that money, leader Jagmeet Singh pledged at a campaign stop in Toronto.

The party would make sure “companies that took public money and abused that, are reimbursing that, are paying back that money that they took,” Singh said Monday, the second day of the federal election campaign.

In its platform, the party promises to “go after large corporations that took publicly funded COVID-19 wage subsidies and turned around and paid out executive bonuses, executed stock buy-backs or paid shareholder dividends.” The document doesn’t cost out how much money an NDP government would claw back, but Singh said many companies would be affected.

This is very rich, as this tweet points out.

The NDP was one of the two key architects (the other being, of course, the Liberals) of the CEWS and, moreover, they have repeatedly attempted to take credit for the very same program of mass cooperate welfare that they are now promising to rectify the abuses of.

For example, even after many of the dividends and payouts were uncovered, the NDP and Jagmeet Singh took credit for the program in a December 28, 2020 fundraising email:

We have reported on this repeatedly on The Left Chapter and the NDP’s hypocrisy now is astounding, especially as they continue to take credit for the CEWS only trying to frame it as supporting “small business” as if this is somehow better. As I noted before one could take issue with the rather fanciful notion that the NDP “delivered” any of these programs, but it is fascinating that they continue to want to be celebrated for their involvement in promoting the largest example of corporate welfare since the 2008 financial crisis.

In light of what we have learned, taking credit for this is almost funny, though as usual with the NDP the joke is on the left and Canadian working class.

The NDP-Liberal CEWS sham was a disgraceful fiasco that represents one of the biggest transfers of wealth from the public to wealthy corporations and CEOs in Canadian history.

The NDP now claiming it will try to clawback the terrible effects of a corporate handout program they not only wholeheartedly supported but even claimed as a “success” in the minority parliament is a Florida swampland moment.

If you are buying it, think again.