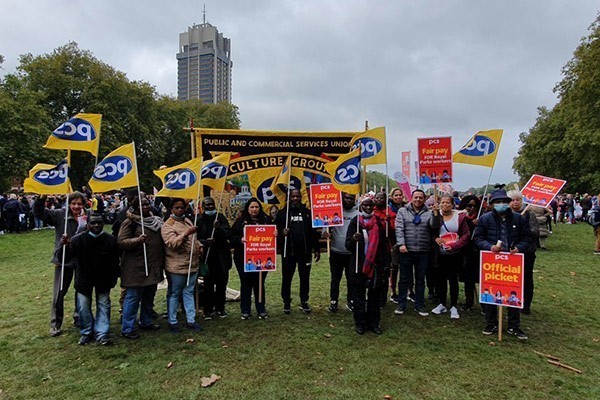 Outsourced cleaners working at a number of parks in central London protested at the Royal Parks Half Marathon on Sunday.

The protest came a week into the cleaners’ month long strike over sick pay and possible job cuts.

The members of the PCS union work for private company Just Ask Services.

PCS says it has “made progress on a number of issues, but not on sick pay,” during talks with bosses.

Ballot at the DVLA

Workers at a large government office in Swansea in South Wales are balloting for a new round of strikes over coronavirus safety.

Members of the PCS union at the Driver and Vehicle Licensing Agency are in a long-running battle with bosses over attempts to force more of them back into the office.

DVLA bosses want to bring 150 more workers back on site—having already brought some 450 more back in June.

This is despite the fact that there have been at least 800 cases of coronavirus among workers there since September last year.

The ballot is set to run until Wednesday 10 November.

Workers should vote for action.

After months of protests, cleaners at Facebook headquarters in London will vote on whether to strike.

The members of the Caiwu union, who are outsourced to Churchill Group, say that they are being forced to endure excessive workloads that they have described as “impossible.”

Strikes will also be held to protest at the dismissal of supervisor and union rep Guillermo Camacho.

Workers are also demanding that they be brought in house.

The strike ballot is expected to be held in midOctober which could mean that workers could be on strike in December.

Sage strikes back on

Cleaners and maintenance workers at the Sage care home in Golders Green, north London, are preparing for more strikes.

They struck earlier this year to demand they receive £12 an hour and terms and conditions in line with NHS workers. Talks have led nowhere.

Workers are also angry at the dismissal of two longstanding union members, Adam and Shamila.

“We built a high profile campaign, supported by care workers around the UK, that led to strikes at the start of the year during a global pandemic lockdown.” said Bile a senior care worker at Sage

“Yet Sage trustees not only failed to keep their word but also continue to preside over a workplace that is short-staffed, mismanaged and where bullying, favouritism, and a blame culture is rife.