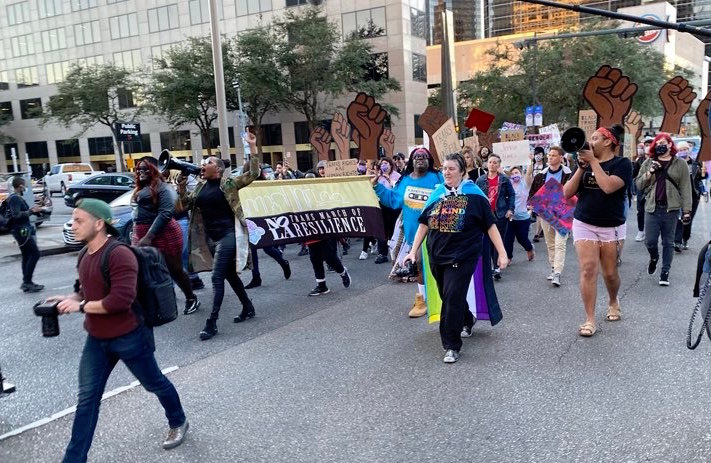 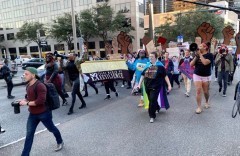 New Orleans, LA – On November 19, over 100 trans activists and their friends defiantly gathered at New Orleans City Hall. On the day recognized nationally as Trans Day of Remembrance, their fourth annual Trans March of Resilience emphasized the struggles that trans people face to survive.

The year 2021 has been the deadliest on record for transgender and non-binary people in the U.S., according to Human Rights Campaign. In early November, Marquiisha Lawrence became the 45th trans person reportedly murdered. She was shot in her home in Greenville, South Carolina. This record broke the previous record of 44 reported trans murders in 2020.

Lead organizer of Trans March of Resilience, Milan Nicole Sherry, said “As we march today we firmly declare that trans rights are human rights. It is our obligation to uplift, expand and protect the rights of transgender brothers, sisters and siblings, including those who are immigrants.”

As the rate of anti-trans violence climbs nationally, Republican politicians across the country are advancing a new wave of anti-trans laws. This year, trans activists in Louisiana spent months fighting against four proposals in the state legislature that targeted trans youth. The movement defeated all of them.

Ed Abraham of the Real Name Campaign said “it was people like us and everyone here whose activism made our ‘representatives’ know that we wouldn’t allow them to attack us or to attack trans children.”

Speakers at Trans March of Resilience highlighted the disproportionate rates of violence and discrimination faced by Black transgender women and trans people of other oppressed nationalities. Two-thirds of the known killings of trans people since 2013 have been against Black trans women.

Another major theme of the march was the economic exploitation faced by poor and working-class trans people. “All trans people should have access to gainful employment,” said Milan Sherry, “and should get access to affordable childcare, affirming healthcare, and safe work environments.”

The march was a political statement and a cultural event, with community members sharing poems and marching under elaborate signs. A speaker from Freedom Road Socialist Organization drew attention to the need for people’s movements to unite and defend the interests of working-class communities, including trans communities.