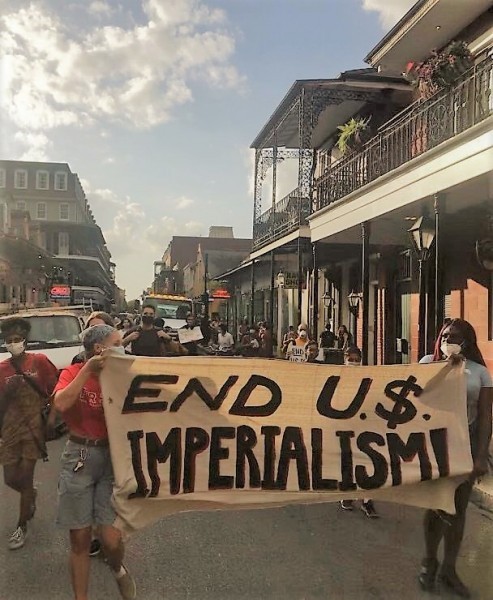 Protesters against U.S. wars march through the French Quarter.
(Fight Back! News/staff)

New Orleans, LA – On August 31, around 30 community members gathered in opposition to the U.S. government’s role in fueling crises around the world. They met at the historic Congo Square in the Treme neighborhood of New Orleans.

Solidarity with the people of Cuba and Haiti, who share a geographical region and a long historical link with the people of New Orleans, was a major theme of the rally. Co-organizer Toni Jones said to the crowd: “For over 200 years Haiti has been a beacon, for showing the world that it’s possible for Black people in America to create a free republic.”

Local historian Leon A. Waters spoke about the direct link between the Haitian revolution and the 1811 Slave Revolt in Saint Charles Parish. The Revolt carried the slogans “On to New Orleans” and “Freedom or Death” only seven years after Haiti achieved independence.

The crowd marched through downtown New Orleans, taking over major roads to reach the Hale Boggs Federal Building, where they rallied.

Meg Maloney of the Hospitality Workers Alliance said, “We have to be willing and ready to speak to our coworkers, to our community members, about this because it directly affects us. They are taking our money and they are using it to terrorize people around the world.”

Speakers highlighted that the U.S. government terrorized the people of Afghanistan through years of drone warfare. It is also terrorizing the people of Cuba with the blockade and economic embargo.

The protest rejected the lie that U.S. wars are fought to spread freedom and democracy. “The U.S. has lost the war in Afghanistan, and that’s a great thing,” said Serena Borne of the Freedom Road Socialist Organization, “because these wars and interventions crush the self-determination and democracy of these nations.”