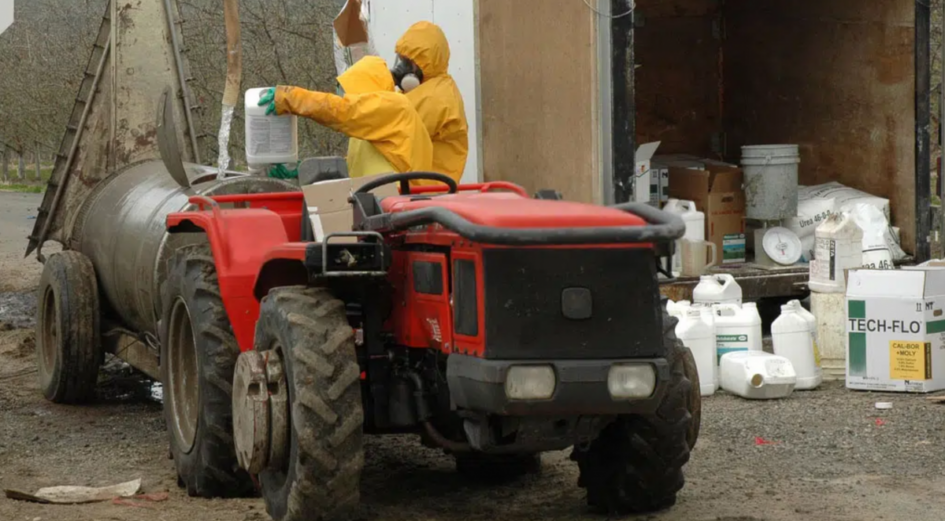 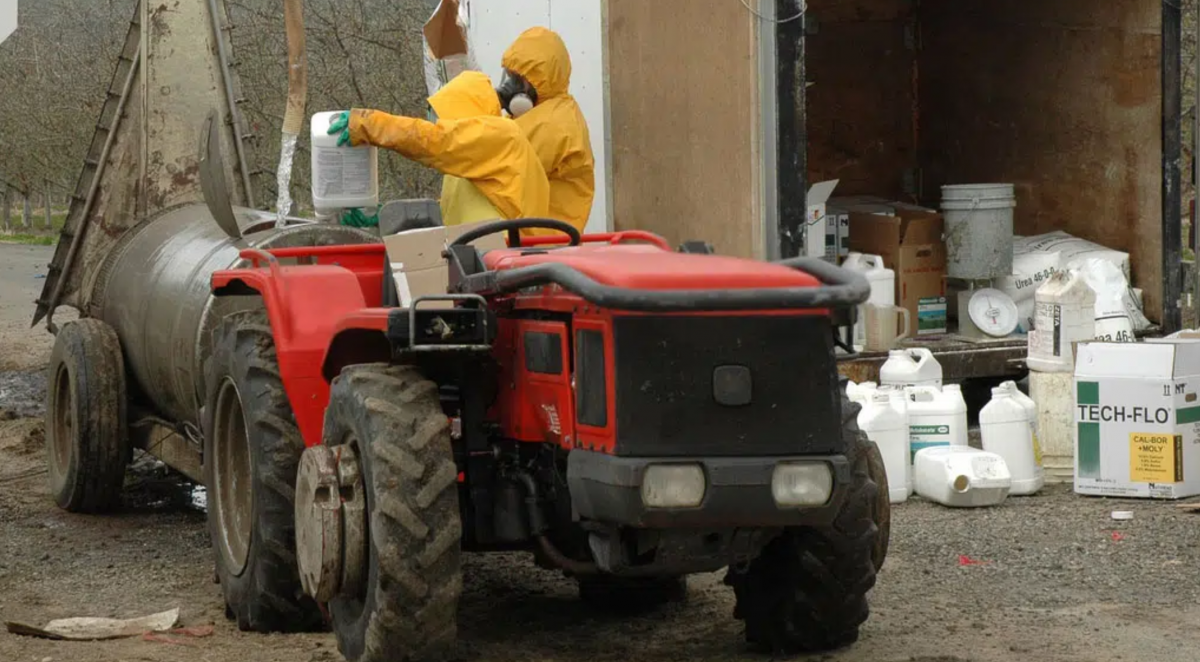 Above photo: Workers mix and load agrochemicals to be sprayed onto crops. Pacific Northwest Agricultural Safety and Health Center.

As chemicals designed to kill insects and weeds, fungi and rodents, pesticides are among the most toxic and damaging substances on the planet. Their harmful impacts on human and ecosystem health are generally well understood. What receives far less attention, however, is the climate impact of these agrochemicals. Not only do pesticides directly contribute to the climate crisis, but a changing climate is likely to intensify pressure from agricultural pests and decrease plant resiliency, resulting in greater pesticide usage and therefore further greenhouse gas emissions, according to a new report.

This “vicious cycle” of pesticide use fueling climate change, and vice versa, is examined in a report published Tuesday by the advocacy group Pesticide Action Network North America (PANNA). According to PANNA, the assessment is the first in-depth scientific review of the relationship between pesticides and climate change.

“The fossil fuel industry, pesticides, and industrial agriculture are inextricably linked,” explained Asha Sharma, PANNA organizing co-director and co-author of the report. “Pesticide companies are complicit in the climate crisis, and further the agricultural sector’s dependency on fossil fuels.”

Nearly all synthetic pesticides are derived from fossil fuels, and like other petrochemical products such as plastics and nitrogen fertilizer, they emit greenhouse gasses throughout their manufacturing and use. But while the climate impacts of plastics and fertilizers have garnered more attention in recent years, the climate emissions associated with pesticides have received relatively little consideration or study. “Virtually no studies calculate the GHG [greenhouse gas] emissions of pesticide use over the full life cycle of the chemicals,” the report notes. Production emissions, for example, are difficult to quantify due to commercial confidentiality, allowing manufacturers to avoid disclosing complete information on pesticide ingredients.

While precise figures may be lacking, research does indicate that pesticide production is especially energy-intensive, and there are estimates of energy use associated with the production of certain pesticides. These calculations can be used to estimate greenhouse gas emissions from pesticide production. According to the report, insecticide production on average generates between around 15 and 19 kilograms CO2-equivalent per kilogram of pesticide, while herbicide production results in between 18 and 27 kilograms of CO2-equivalent per kilogram on average — more than double the amount of emissions (in kilograms of CO2) from burning one gallon of auto gasoline. In terms of energy usage, manufacturing one kilogram of pesticide requires an average of 10 times more energy than producing one kilogram of nitrogen fertilizer, which is made from natural gas. Fossil fuels are therefore integral to the production of pesticides, both as an energy source and as chemical feedstock. Through their chemical divisions, major fossil fuel companies produce pesticides or their chemical precursors.

Pesticides further contribute to climate emissions once they are applied to agricultural fields. Many pesticides release volatile organic compounds (VOCs), a precursor to ground-level ozone that acts as a powerful greenhouse gas. In addition, they disrupt soil microbes, which play a critical role in the ability of soils to sequester carbon. By degrading soil health, agrochemicals limit the capacity of soils to store carbon. Furthermore, a form of gaseous pesticides called fumigants may generate emissions directly, as some like sulfuryl fluoride are themselves greenhouse gases, or indirectly by stimulating soils’ production of nitrous oxide, a powerful greenhouse gas.

Pesticides therefore release climate-warming emissions across their life cycle, but research indicates that climate change itself is likely to lead to further increases in pesticide use. As climate change intensifies, rising temperatures and shifting precipitation patterns are expected to make crops more vulnerable to pests as these plants lose their ability to withstand stressors. Higher temperatures are likely to boost insect development, exacerbating pressure from pests such as corn borers. Farmers also can expect worsening wars with weeds because these unwanted crop competitors tend to be more adaptable to changing climate conditions, giving weeds a leg up under a less stable climate.

The report calls for putting an end to this noxious nexus between pesticides and climate change by shifting farming away from the chemical-intensive industrial model and towards agroecology. This latter approach eliminates chemical and corporate dependency and integrates ecological principles into food production.

However, according to the PANNA report, current climate mitigation discussions and policies tend to ignore the role of pesticides — a lynchpin of chemical-dependent industrial agriculture — and overlook alternative farming models like agroecology that minimize the ecological and climate damages of industrial agriculture. Many of the proposed solutions to agriculture’s climate footprint instead consist of technological or efficiency improvements that maintain dependency on synthetic fertilizers and pesticides. These purported solutions, promoted by big agribusiness interests like the pesticide industry, fail to confront the underlying system of chemical-intensive farming.

As DeSmog previously reported, the pesticide industry is now marketing itself as climate-friendly and pushing high-tech innovations such as “precision agriculture,” which the report calls a false solution because it “maintains a system dependent upon chemical and energy-intensive technologies and materials, while diverting attention from and investment in more effective climate-friendly strategies in agriculture.”

“Our new report reveals how oil and gas companies and pesticide manufacturers have followed a similar playbook — strategically promoting flawed solutions to the climate crisis, like carbon capture and storage and new digital agriculture tools, which in reality offer minimal climate benefits,” PANNA’s Sharma said in a statement. “Corporations tout these novel technologies to protect their reputation, while they continue to profit from fossil fuels. We need deeper, transformative approaches to actually solve the root problems of our broken food system.”

And as with the fossil fuel industry, lower-income and communities of color tend to bear the brunt of negative impacts, such as health impairments due to pesticide use and production. Moreover, climate effects like high temperatures can exacerbate the health risks from pesticide exposure. This is especially concerning for farmworkers, who tend to be immigrants or from minority populations, and who directly handle the chemicals and often work under sizzling temperatures.

“The compounded effects of climate change and pesticide use primarily fall on the shoulders of people of color — a climate and racial injustice,” the report states.

Sharma told DeSmog that more work is needed to raise awareness of the inextricable links between pesticides and fossil fuels, and to build grassroots power to counter the enormous influence of the $200 billion agrochemical industry. As DeSmog has previously reported, the industry plays a substantial role in working to block the transition to more sustainable farming models, with heavy lobbying that threatens policy efforts to reduce pesticide use.

“The only way to combat industry’s political influence given the amount of resources at these companies’ disposal is through collective movements that center the people most impacted by the health effects of industrial agriculture and climate change,” Sharma said. “These broader movements that bring together advocates across the food system demonstrate the public’s overwhelming support for more sustainable and equitable farming systems to policymakers while also working to shift systems of power in the food system, which is ultimately what’s needed if we are to make any real progress.”

The IMF connection with the Ukraine crisis

“Let us all work together for a shared future”: Xi Jinping’s New Year address, highlights and video