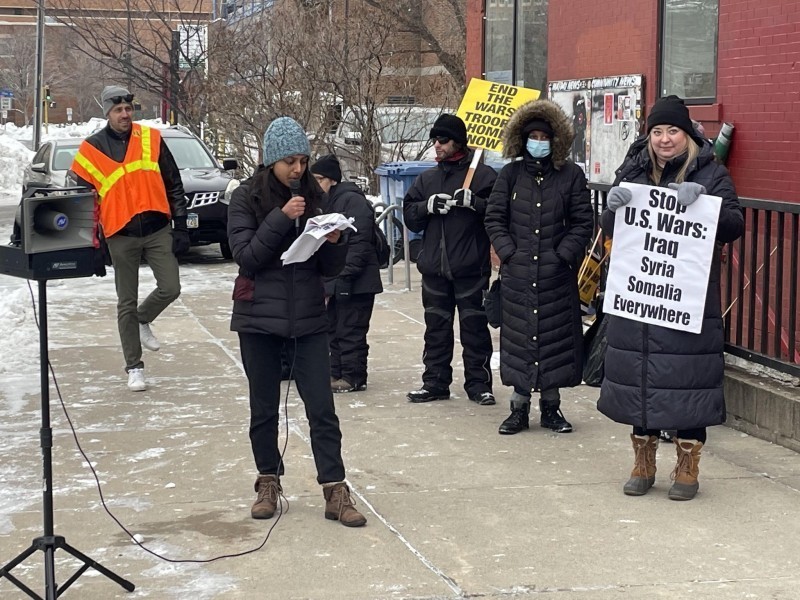 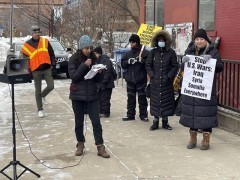 Minneapolis, MN – On January 22, the Minnesota Peace Action Coalition, a coalition of anti-war groups in Minnesota, rallied in Mayday Plaza as part of the United National Antiwar Coalition’s national call for Martin Luther King Jr. week of actions against U.S. wars to mark his birthday. On the theme of “New Year, Same Wars,” the protest drew a crowd of 70 protesters, eager to hear from activist leaders across the Twin Cities representing the voices of those impacted by U.S. imperialism and endless militarism.

People lined the sidewalks, facing traffic and holding signs expressing the crowd’s sentiment, “End the wars! Troops home now!” “War is not humanitarian!” The emcees welcomed everyone who took time to be a visible force and said how it is important to be out demanding the U.S. end all their endless wars.

Setting the tone of the protest, everyone joined in chanting, “Coups and sanctions cost lives! Don’t believe the media’s lies!”

The organizers drew parallels between Dr. King’s anti-war message during the Vietnam era and the current fight to end U.S. intervention in countries across the globe. Kim DeFranco, member of Women Against Military Madness, explained, “King knew the cost of the U.S. endless wars waged around the world. The cost was not just in dollars but in the human toll. He made the connections between the economic and social costs between the U.S. wars and working people here and in the countries the U.S. destroys.”

Within the crowd on the plaza, the Veterans for Peace’s minibus was surrounded by colorful signs “Money for the poor not for war,” “Yes to Peace, no to NATO” and “$80 billion for Ukraine – no way!”

Speaking on the ongoing violence and oppression in Palestine was Aarushi Sen from the Anti-War Committee. She shared that in 2023 to date, 17 Palestinians have been killed by the Israeli military and yet the “the U.S. continues to prop up Israeli apartheid.”

During his speech, Mike Madden of Veterans for Peace, in his enlivened style, threw his gloves down like a hockey player ready for a fight, a very Minnesotan demonstration of “We’ve had enough.” He then spoke about the proxy war between the U.S. and Russia and the real cost: “We supply the weapons and the Ukrainians do the dying.” His message emphasized the dire need to stop the dangerous proliferation of the U.S. war machine.

While some speakers addressed the blatant U.S. oppression of countries like Palestine, Venezuela and Iran and the proxy war with Russia, others tied the struggle at home to the actions of the U.S. military. Jae Yates of Twin Cities Coalition 4 Justice 4 Jamar spoke about the shared resources between local police forces and the U.S. military, sharing the goal of quelling uprisings and public discontent. “If the police are the first line of defense against real change in our country, then the military is the second; it not only backs the police when we challenge the state but trains and arms them.”

Monique Cullers-Doty of Black Lives Matter Minnesota and Black Lives Matter Twin Cities spoke of solidarity with the anti-war movement and the important role organizations play in supporting each other in the fight for liberation. She also called for the U.S. to change from focusing on getting involved in militarism abroad to address issues at home; “America needs to provide for everyone that is here.”

Throughout the protest people directly participated in chanting, “From inside the capitalist beast, we demand justice, we demand peace!”

Rounding out the protest, David Gilbert-Pederson, member from the Minnesota Workers United, systematically described how endless wars have a devastating impact on workers in the U.S., calling attention to the needs of the people here that are being ignored while military and police spending continues to increase. Issues like housing, hunger, education and healthcare suffer budget cuts and leave people without resources while the government justifies acts of war and violence through the vilification of people in other countries. He said, “We have more in common with the people of the countries that the U.S. attacks than we do with the capitalists waging the wars.”

The rally concluded with the emcees emphasizing the importance of “taking a great stand against endless U.S. wars and for being a visible and a loud anti-war movement.” They encouraged attendees to continue to fight in the streets for an end to U.S. militarism.

Minneapolis rallies on the anniversary of the Iraq invasion to say no to U.S. wars

Another Blistering Year Next Year?

Lucid Summations When Tomorrow Is Today and MLK Day