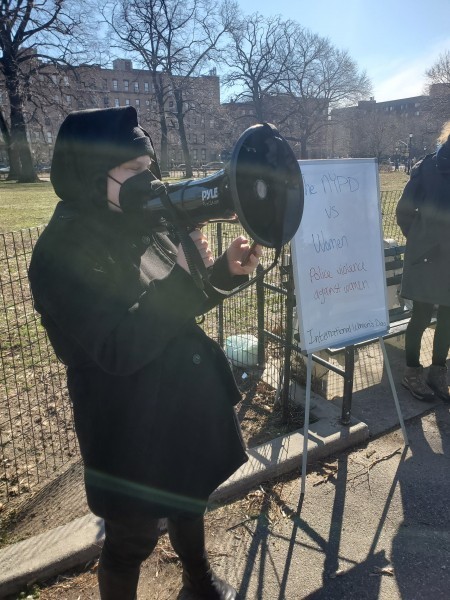 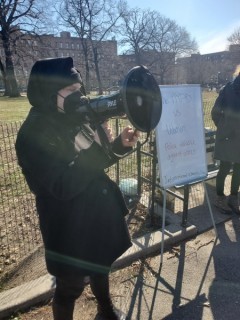 Jessica Schwartz told the crowd, “On a national level, police families face two to four times more prevalent instances of violence. A report from 2019 that reviewed the NYPD’s disciplinary practices showed that cops are more lenient toward cops who commit domestic violence. In fact, officers received more severe punishment for ‘discourtesy to a commanding officer’ than for committing physical violence against a child or spouse. The fact is that despite claiming to ‘serve and protect’ the people of New York, the NYPD really serves to protect their own first and foremost, even when they are blatantly abusing women.”

Schwartz was followed by other NYCAP members who each brought up different aspects of the NYPD’s brutality against women and oppressed genders. From talking about Sofia Gomez, an immigrant woman murdered by the NYPD as she was walking home from work, to Layleen Polanco, a 27-year-old transgender woman of color, who died in solitary confinement at Rikers Island. Speakers also brought up Breonna Taylor as the event came on the heels of the acquittal of the officers involved in her murder.

The speakout ended with the members talking about their campaign for community control of the police, and the next steps on how to wage this current struggle against the NYPD’s rampant violence.

Europe’s shame: The horrific treatment of refugees on the Poland-Belarus border

Ill-treatment of Stan Swamy in jail should ‘shake foundation of democracy’: Fellow prisoner

An Arkansas jail tested ivermectin ‘treatment’ on detainees without their consent