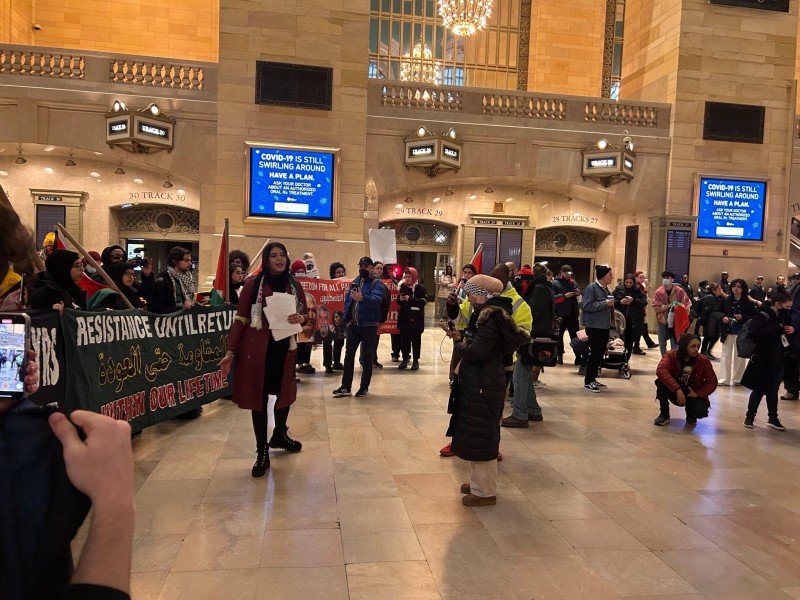 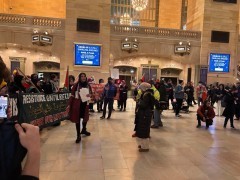 New York, NY — On Saturday January 21, New Yorkers rallied inside Grand Central Station for an emergency action called by Within Our Lifetime and Samidoun Palestinian Prisoner Solidarity Network as part of a global week of action. The crowd of 80 people honored the 15 Palestinians killed since the beginning of the New Year and demanded the freedom of all Palestinian prisoners, despite the New York Police Department’s attempts to silence the rally.

The action began with chants demanding freedom for Palestine and an end to Zionist occupation. Posters and banners called attention to the specific cases of Ahmad Sa’adat, the general secretary of the Popular Front for the Liberation of Palestine, and Ahmad Manasara who spent another birthday locked up in Zionist prison instead of with his family.

The NYPD responded to the rally by mobilizing dozens of cops in an attempt to intimidate the protesters. The cops repeatedly confronted the organizers over the use of sound equipment, while ignoring hecklers who harassed the protesters and attempted to instigate fights.

After the chants, the protest marched around the inside of the concourse, drawing attention and support from bystanders and travelers. The protest then moved outside and briefly took over the streets, blocking traffic in midtown. Finally, the crowd returned inside where the rally finished.

Solidarity and justice for Palestinian political prisoners in Israeli prisons

Instead of Freeing Palestinian Prisoners, New Scheme Aims at Punishing Their Families

Philippines: Raise the demand for freedom of all political prisoners