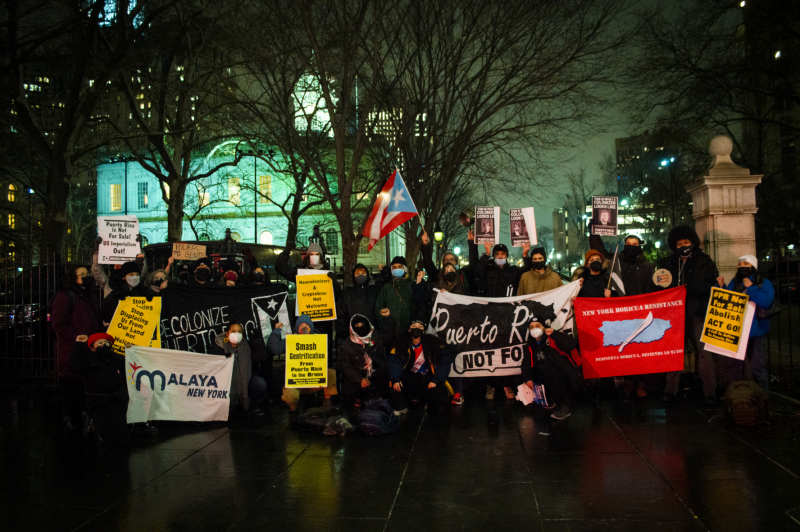 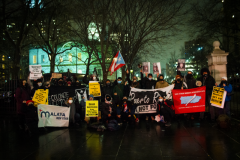 New York, NY – On the evening of January 28, hours before a nor’easter was going to hit the east coast, a few dozen people gathered in front of City Hall to demand that Mayor Adams end his relationship with Brock Pierce, a crypto currency expert.

The protest was organized by New York Boricua Resistance and Colectiva Solidaridad right in front of Mayor Adam’s office, who has already incited concern from progressives throughout the city as he’s doubled down on supporting the corrupt NYPD. However, Adam’s new project is Act 60, and the main beneficiary is Brock Pierce.

Act 60 is the short form name for “The Tax Incentive Code 60” which provides tax exemptions to businesses and investors that relocate to and/or establish themselves in Puerto Rico. They can relocate themselves for less than half a year and the U.S. tax code will exclude income made while in Puerto Rico from their U.S. gross income. The main group of people who have taken advantage of this incentive are b-list celebrities and crypto currency entrepreneurs.

The new wave of people moving to Puerto Rico has pushed local people out of their houses while crypto mining continues to bring undue environmental damage on land that has already experienced so undue stress from natural disasters.

Mayor Adams entertaining the likes of Brock Pierce are a harbinger of the wave of neo-liberal policies that will sweep NYC in the next four years.

There were speakers from different organizations, such as Dare to Struggle, Malaya Movement, Mexicanos Unidos and the New York Community Action Project.

Jessica Schwartz from New York Community Action Project brought up Mayor Adams in her speech, “Now with Eric Adams as mayor, we’re already seeing promise of heightened police presence and crackdowns on the people. He has stated that he wants to bring back the plainclothes police because he wants to bring back the ‘unpredictability’ of policing. Nearly two years after the biggest uprising against police violence in U.S. history, Mayor Adams is a slap in the face to all of us who’ve been fighting for justice. That’s why we must continue to fight back against not just the NYPD, but the whole system that puts both New Yorkers and Puerto Ricans under their greasy fingers.”

Organizers around the city have really set their target to Mayor Adams, as he promises to only bring injustice to all sectors of life. Whether it’s defending Puerto Rico or fighting the NYPD, the people of New York are ready to fight back.