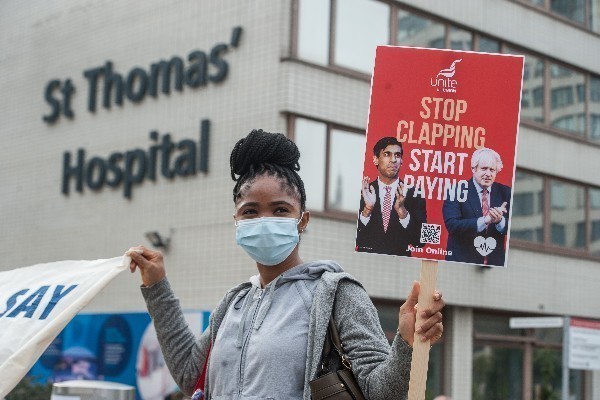 NHS workers are under intense pressure and have been kicked in the teeth over pay (Pic: Guy Smallman)

The Tories have learnt nothing from their litany of Covid calamities—and now they look set to repeat them.

Doctors’ organisations, health service bosses and the government’s own scientists have spent the last few days warning that Britain is in the midst of a new viral wave that could devastate the NHS.

The head of the NHS Confederation was among many that begged the Tories to re-introduce the most elementary protections—known as “Plan B”.

These measures include the mandatory wearing of face masks in indoor spaces and advice to work from home where possible.

But chancellor Rishi Sunak joined other ministers in putting his fingers firmly in his ears.

Speaking to the BBC’s Andrew Marr Show on Sunday, Sunak said, “At the moment the data does not suggest that we should be immediately moving to Plan B”.

He would not even commit to wearing a mask in parliament.

What a nonsense. The seven-day average of new infections is now over 40,000. Two weeks ago it was just 30,175. And, while the chancellor shrugs his shoulders, well over a hundred people are dying from Covid every single day.

The latest round of infections is finding people who are vulnerable because their vaccine is no longer effective—or never worked for them—and those who aren’t fully vaccinated, including a number of pregnant people.

Many become seriously unwell and need to be admitted to hospital.

But Dr Katherine Henderson, president of the Royal College of Emergency Medicine, says NHS emergency departments are in a “terrible place”.

“We’re already struggling to cope,” she told Sky News. “This is not something that’s coming in the next couple of months.

“We’re already in a terrible place where we have got large queues of ambulances with vulnerable people waiting in those ambulances to be offloaded into departments and other patients at home waiting to be picked up by the ambulance.

“That’s the thing that really worries me—that these are patients who have not yet received treatment, that we don’t necessarily know what’s wrong with them, that we’re really struggling to get into our healthcare facilities to then work out what we need to do.”

Hospitals in Cornwall last week declared a “critical incident” due the pressures they are facing. The local NHS trust reported up to 100 people waiting to be seen, with 25 ambulances waiting outside.

The knock on effect was that even some patients with chest pain were forced to wait more than eleven hours for an ambulance.

Will Warrender, head of the regional ambulance service, said, “Two years ago, on an average week, we would lose about 400 hours in handover delays.

There has been a sharp rise in the number of Covid-related admissions in nearby Plymouth in recent weeks, which some experts say could be the result of the failure of the private and unaccredited Immensa test processing lab in Wolverhampton.

About 43,000 people, mostly in south west England, were wrongly told they did not have Covid. It is thought that many of them could then have unknowingly passed the virus on, leading to a large spike in infections.

“In the long list of Covid disasters and scandals, this is pretty near the top,” said Alan McNally, a professor at the University of Birmingham, who helped set up the Lighthouse Covid testing lab at Milton Keynes.

The NHS crisis is far from restricted to A&E, or just the south west of England.

In Wales, waiting lists to see hospital specialists gave grown to a record 657,539, a record which is equivalent to more than 20 percent of the Welsh population.

That means thousands of people, many in terrible pain, are waiting for an appointment that only seems to get further away.

With a situation as grave as this, the trade unions and the broader labour movement have a tremendous responsibility.

Not only is the safety of millions of workers at stake, but the survival of the NHS lies in the balance.

Meanwhile the Labour Party also refuses to call for more safety measures. Keir Starmer shares part of the blame for the spiralling toll of unnecessary deaths.

We need far more than an angry press release from trade unions as a response.

We need protests and marches called in every town and city—and we need the utmost backing for workers who are beginning strike ballots in the coming weeks.

Janet, a cancer nurse in central London, spoke to Socialist Worker about how pressures are hitting every part of the health service.

“For the first time in nearly four decades of nursing, we are finding that we can’t fill temporary bank shifts for nurses on our ward,” she said.

“People who might previously have looked to do extra work in the run-up to Christmas won’t come forward. They are just too knackered and stressed—even if they could really use the money.

“That means if someone on our ward rings in sick we all know we are going to have a terrible day.

“It will be non-stop running from patient to patient, relentless pressure—and getting home much too late.”

Janet says she and the other staff will do their best to make sure patients don’t suffer, but she says they always know when the ward is short staffed.

“Patients become really apologetic and reluctant to let you know when they need something, or if they have a question.

“What worries me now, is that we are creating a generation of nurses that don’t know any different to this level of pressure.”

Continual stress can have a terrible effect on nurses, says Janet.

“Sometimes the only way to cope is to close your eyes and ears in a bid to protect yourself. But in that kind of environment, important things can get missed.”

“Recently, I looked at a picture of the staff on our ward taken just three years ago. All but three of the 25 of us have left since then.

“Earlier in my career people used to stay. It wasn’t unusual to work alongside people for five or ten years. That’s all gone now.

“That’s what relentless pressure does, it breaks everything up.”