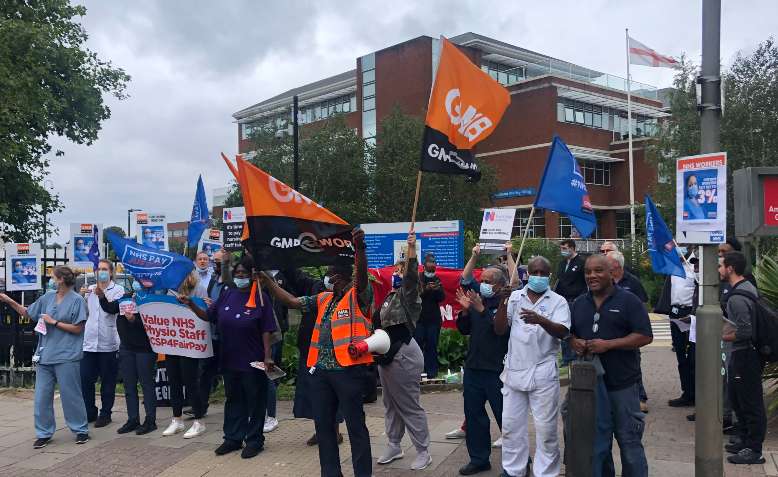 The pandemic has changed the mindset of NHS staff, including nurses, and this is clear from the results of the RCN, Unison and GMB indicative ballots on the 3% pay offer. 90% of RCN members, 83% of Unison members and 93% of GMB members delivered an unambiguous rejection of the government’s pay deal.

The idea that ‘nurses won’t ever strike because they care too much about patients’ won’t hold water in the coming period. In fact it’s the nurses who genuinely care about patients and preserving the quality of NHS services who will devote additional time to building for militant industrial action within their trade unions. The choice facing NHS workers who are being pushed into poverty will be either leave the NHS for good or get active in a trade union and fight back.

GMB was the first health trade union in the country to adopt the call for a 15% restorative pay rise for all NHS staff. We believe that increasing the salaries of all staff across the board in the NHS is key to any attempt to address the recruitment crisis and is also key to stopping outsourcing. The battle for pay justice in the NHS is inextricably linked to protecting standards and NHS services.

The attempts by the Tory government to ignore the 15% pay demand and to instead ramp up student nurse intake as an alternative will fail to make a dent on a deepening NHS recruitment crisis. The new student nurses will find themselves amongst the most exploited groups of NHS workers as they suffer the double injustice of being used as free labour on the wards whilst amassing huge levels of student debt.

Student nurse supernumerary status which was introduced in the mid 1990s has created a legal barrier to including them in strike ballots, but it will be vital for trade unions to find ways of enabling student nurses to mount a collective challenge to the exploitation that is running out of control. Research by the Nursing Standard indicates that the student nurse dropout rate is running at one in every four and this combined with the forty thousand nurse vacancies is unsustainable for the NHS.

NHS trade union members are asking questions about how to engage and get more active in their unions and they want information about how strikes would work in the NHS. Even nurses are starting to realise that it is far better to contemplate strike action over a limited period than to allow the slash and burn of their contractual rights to continue without challenge. The RCN ballot turnout at 25.4% was higher than results and this indicates that the time is fast approaching when the workers normally at the vanguard of the NHS struggles, the soft faculties management staff and ambulance staff, will be joined by nurses and other NHS clinicians.

GMB Southern Region balloted more than 8 thousand NHS members. Thanks to the tireless efforts of our reps who built for our successful day of action on 17 August, who assisted us with workplace balloting and phone banking, we are already over the line in the turnout for our region which at the time of writing this stands at 50.19% with a 94% reject. Getting this significant ballot result was hard work but the process enabled our members to engage directly with the GMB.

The hundreds of discussions advanced understanding that joining a trade union is more than an insurance policy for an individual problem at work. GMB union is much further ahead in achieving our aim to embed collectivism within the NHS workforce. In GMB Southern Region we want to go forward and escalate action in the NHS and ambulance trusts where it can be delivered because our members are angry, they are fed up with the way they are being treated and we hear this loud and clear.

Although our NHS membership is growing fast, GMB remains one of the smaller unions but we have defined ourselves as a trade union that has the ear of our members and we will advance their interests and those of everyone who uses the NHS. We recognise that even though there are unique challenges involved in organising NHS workers, the GMB indicative ballot result sends a strong message that growing numbers of our members are no longer prepared to put up being taken for granted by the NHS tops and government. GMB has successfully leveraged the entire trade union movement across the NHS throughout the NHS Pay 15 campaign and the potential is there to do this again.

As a trade union we recognise that linking up with our friends in all trade unions, Keep Our NHS Public, NHS Workers Say No, Health Campaigns Together and others will only strengthen our hand while building the coalition of forces necessary to protect and defend the NHS. We will be calling on these comrades across the unions, campaign groups, community groups and social movements to assist us with leafleting hospitals, engaging with our reps and members and sharing information about the impact of the cuts and privatisation on hospital staff and patients alike.

Together we will unite to dismantle the corporate jargon and oppose the rampant restructuring that is taking away our NHS by stealth. The fight for the NHS belongs to all of us because a decent, accessible healthcare system run by skilled, highly-trained and competent staff is vital for absolutely everyone in this country at some point in their lives.

The overwhelming mood to reject 3% across the NHS trade unions clearly indicates that the battle to save our NHS has reached a whole new level.