No Compromise on What Minneapolis Educators & Students Deserve! 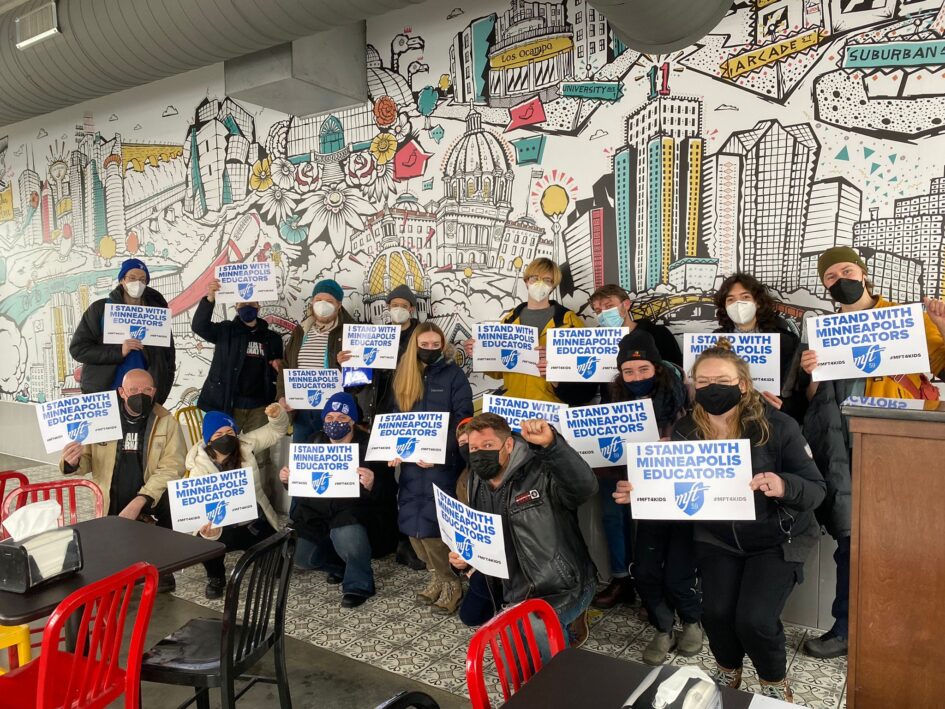 Statement from Socialist Alternative MN, on the ground:

As we go to print, the Minneapolis Federation of Teachers (MFT) leadership is pointing towards a proposed tentative agreement with the district. Unfortunately, we think this agreement will likely fall short of what educators are fighting for. Please visit SocialistAlternative.org for updated material and videos on the struggle.

After a 97% strike authorization vote, around 4,000 educators with the Minneapolis Federation of Teachers (MFT) walked off the job for the first time in 50 years. As we go to print, the MFT leadership are recommending a vote on a tentative agreement for a 3% teachers’ raise, and bonus checks for Educational Support Professionals (ESPs) which is not nearly enough for ESPs making poverty wages and for all educators to keep up with rampant inflation.

This tentative agreement is far below the initial demands for a 20% teacher pay raise, and $35,000 starting salary for the ESPs, and reflects weaknesses in what began as a strong strike. Educators, students, and parents deserve better than 3% raises for teachers, and one-time bonuses for ESPs. A three percent raise will be wiped out by less than a year of inflation. This agreement would become a pay cut in real terms on top of decades of declining wages. One job should be enough, and that’s what’s necessary to keep students in the district and give them the attention they deserve. We support a “no” vote on this tentative agreement, alongside MFT members who are calling on the broader community to immediately organize for an escalation and reorganization of the strike.

The money is still there! There’s a $9 billion state budget surplus, and the Twin Cities are home to numerous fortune 500 companies raking in record profits. We can win our demands, much better than what’s on offer in this weak tentative agreement, if we fight for what we need and organize a real escalation to win.

The MFT leadership have called for many of the right tactics, including regular rallies and a daily strike bulletin. Morale on the pickets has been fighting and high, but bargaining updates only started in the third week. Speaking at the rallies, the leadership often focused on corporate targets and mass inequality, but didn’t talk about an escalation plan to win specific demands, or comment on progress in bargaining. As often happens in the class struggle, they didn’t organize the outside pressure needed to overcome rotten compromise.

The broader community overwhelmingly supports educators’ original demands, especially for a big teachers’ raise and $35,000 starting annual pay for ESPs. To win, we need to turn this support into action.

The leadership’s greatest success in this struggle was to prepare its members to strike. However, despite a self-sacrificing membership, the strike has lacked the all out strategy needed to fully overcome district opposition.

Even with strong preparation, the leadership used the threat of a strike as a tool at the negotiating table rather than immediately launching into an all out strategy, waiting an additional week after the 97% authorization to call the educators off work. The district wasn’t going to blink without a mass escalation, planned in advance to fully mobilize ten thousand parents and the broader community, backed by statewide unions. The district argued from day one that the money isn’t there, while they sit on a pot of $280 million including COVID relief funds. Superintendent Ed Graff is hated for being paid $230,000, ten times more than an ESP, lives in a suburb and sends his kids to private school. During the first week of the strike, state level politicians discovered the historic budget surplus was even higher than initially reported at $9 billion!

Teachers went on strike motivated by the demand for a 20% raise. In reality, teachers would need a 24% raise to bring their wages back to year 2000 buying power. Some don’t have full confidence that a 20% raise was attainable or would be supported by the broader public. Mass actions could highlight the widespread public support for higher pay. For example, on their own, students organized sit-ins at the district headquarters in support of the demands, which demonstrates broader support but is currently being underutilized by the union leadership.

It has been a strength in the strike that these economic demands go beyond the set-backs felt from the COVID-19 pandemic, alongside other structural demands for smaller class sizes, increased mental health support staff, concrete language to retain educators of color, and more.

To build for the strike, Socialist Alternative organized three door knocks led by our educator members and other union members, including postal, clerical, and transit workers. Amalgamated Transit Workers Local 1005 and the National Association of Letter Carriers Branch 9 passed resolutions to mobilize their memberships in solidarity, and ATU 1005 donated $5,000 to the MFT strike funds. These proposals were initiated by members of Socialist Alternative. Seattle City Council Member Kshama Sawant donated $2,000 from her office solidarity fund.

In the absence of a union wide daily meeting, “Daily Strike Review” meetings started in week one to discuss pickets and proposals. Over 70 MFT members have attended a nightly meeting. Two Socialist Alternative members, one a strike captain and the other a steward, joined with other MFT educators to launch a petition to point the way forward for the strongest possible strike.

This was necessary because unfortunately many of the actions called by MFT have been organized inwardly, often with little notice given to union members, never-mind the wider public. Along with not sufficiently mobilizing the deep community support, the other main mistake of the MFT leadership has been to downplay the demand for teacher pay increases.

Many teachers say that the main goal of the strike is to raise ESP pay, and therefore that teachers should be open to settling for less. It’s a powerful example of the instinctual solidarity that exists among working people, but it runs the risk of backfiring if one group of the union accepts a rotten compromise that sacrifices their needs. Educators need a massive raise and more; and no educator should accept a contract that keeps them working more than one job!

It isn’t too late to fight for better schools

Educators can vote “no” on this tentative agreement, reopen negotiations and call on the broader community to join. We can use this to re-energize the strike and activate community support and other unions too. Educators have been clear that they didn’t take strike action to settle for crumbs. Educators fight for not just ourselves, but for our students’ learning conditions, and to stand firm against ongoing attacks on working people. To fully-fund public education, clearly we can tax the rich and the 16 Fortune 500 companies based in Minnesota.

“Ed Graff, the MPS board of education, Mayor Jacob Frey, and Governor Tim Walz seek to destroy public education in Minneapolis. Educator pay has not kept pace with inflation the last 20 years. Our elected officials remain quiet or negative on educator strike demands despite massive public support, and massive funds at MPS and the state. Pressure from the strike forced the resignation of both a school board member and the head of Human Resources. We must organize the power of working people to grant educator demands and save public education.”

“The labor movement was not built on ‘one day stronger, one day longer’. It was built on mass mobilizations, occupations, and hitting the political establishment where it hurts – their pocket books. The money is there to pay for the schools that educators and students need, but we’re going to need to shut down business as usual to get it!”

U of MN students speak out for striking educators

Why Are You Asking Us to Compromise on Our Lives?

Unite to fight for pay and NHS we deserve