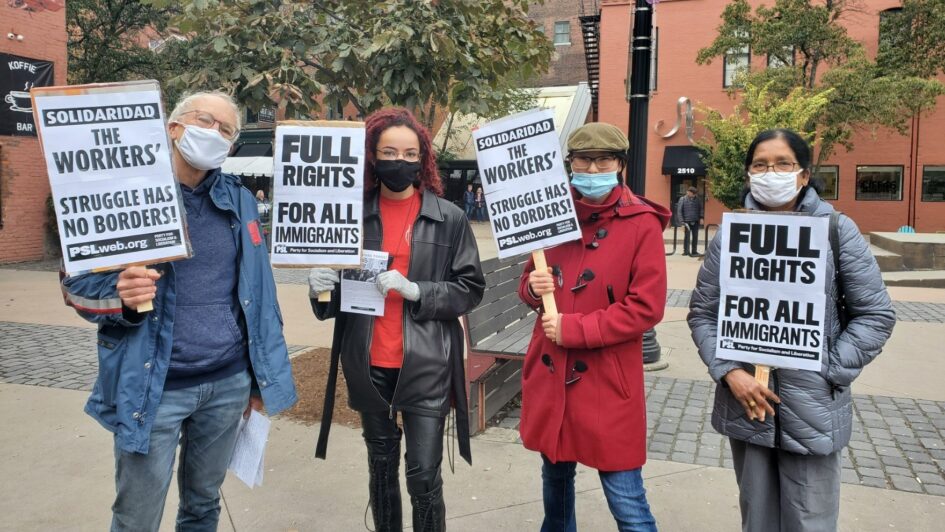 Northeast Ohio Party for Socialism and Liberation members participated in the Papeles Para Todos! Campaign national day of action on October 23 by canvassing residents of the Ohio City, Ohio, neighborhood of Cleveland.

The rallying cry of the ¡Papeles Para Todos! campaign — that is, to get papers for all — resonated deeply with Cleveland residents. The Ohio City neighborhood of Cleveland is a traditionally working class and blue collar neighborhood that is also home to a thriving immigrant community.

Cleveland is also a stronghold for Democratic party politics, but this has not translated to a better quality of life for residents of marginalized backgrounds, particularly those who are undocumented. Xenophobia, housing displacement and lack of opportunities are just some of the obstacles undocumented Cleveland residents face. Having papers and documentation would be the first step for undocumented residents in Cleveland to finally step out of the shadows and enjoy the same human rights and quality of life as anyone else.

A statement in support of the demands of the ¡Papeles Para Todos! Campaign was delivered by PSL member Claire Lewis. Statements of solidarity from the Greater Cleveland Immigrant Support Network and the InterReligious Task Force on Central America were also read.

PSL member Swetha Kareti said that the reason she attended was because, “I come from a family of immigrants, and am aware of how difficult it is to get documented. I am here today for the ¡Papeles Para Todos! Campaign in order to stand in solidarity with my undocumented comrades and continue to support them in their struggle to get the respect and dignity they deserve.”

The rally proved that despite racist and xenophobic fearmongering and attempts to divide us, comrades in the Cleveland neighborhood stand for a diverse and multicultural working class which includes solidarity with the immigrant and undocumented community.