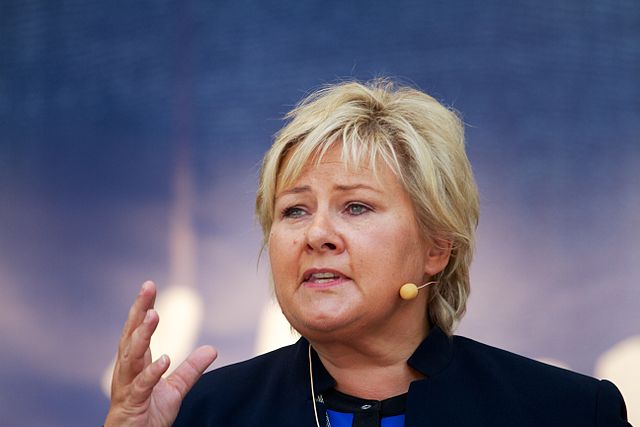 After the election in Norway on September 13th, a new ‘left’ coalition is set to replace the Conservative government of Erna Solberg. It will consist of the Workers’ Party (AP, Social Democrats), the Socialist Left (SV) and the Centre Party (SP) – the old core of the previous so-called red/green alliance. These three got 89 seats between them and just 85 are required for a majority. The main party, the Workers’ Party (AP, Social Democrats) is in the middle of these three; the Socialist Left (SV) broke away from the AP in arguments over NATO and the EU. The Workers’ Party (AP) has been moving rapidly towards the political centre, just like its sister parties in Sweden and Finland. Like them, it is using the more moderate Centre Party (SP) as a crutch to try and keep their own policies “moderate” and trying to keep the “reformist socialists” of the Socialist Left (SV) at bay.

One of the main things the Socialist Left (SV) and the other parties – Red and the Greens – are interested in, in various degrees, is the closing down of the North Sea oil rigs. The greens would close them down tomorrow. The Red party wants to wait a couple of years. The SV wants a phased closing down, including no more exploration for oil, as well as time for oil workers to retrain for other jobs. The Labour Party (AP) is very flexible and just wants to keep to the Paris Agreement. There are very hard negotiations taking place between all three parties, the outcome of which will need fuller analysis.

The Conservatives (Høyre) were in office a record-breaking eight years but ended up down by nine seats, meaning they lost control of the Parliament (Storting) along with the National Conservatives (FrP) who lost six seats, and another of the conservatives’ allies, the Christian Democrats (KRF), lost five seats.

(The ‘victorious’ AP itself actually did not make gains, but lost one seat.) In Norway there is a system of proportional representation in elections, meaning small parties have a chance of winning a seat. The elections are every four years, usually in September. If anyone dies or resigns, the next party candidate on the list steps in and there are no by-elections.

The National Conservatives (FrP), who now have a new leader, lost 6 seats. A few weeks before the election they turned to using the“reds under the beds” scare card. They also boasted about the fact that when they were in government they repatriated 40,000 immigrants to, amongst other places, Afghanistan. The Centre Party (SP liberals) was called the ‘bonde’ party – the party of the agricultural farmers – and has been trying to win enough votes to become the next Prime minister. But they made some mistakes during the farmworkers’ movement (Bondesopprør) of 2021 (see CWI website) and didn’t get the landslide vote they hoped for.

Red (Rødt) (the old CP) has a similar profile to the Socialist Left. But it defends countries like Cuba, China and the old USSR, which were by no means workers’ paradises, but, in fact, undemocratic dictatorships or deformed workers’ states.

The Labour party (AP) is like most of the European social democratic parties and has been moving to the centre, at present wooing the SP (centre liberal party). Its main slogan at present is: “It’s our turn now!”.The parliamentary sharing of power is not something that should be just taken in turns. Workers are not school boys sharing a football. The ‘Workers’ Party’ needs to step up to the plate and complete its manifesto. Workers are already fed up with politicians for not keeping to their word. Who has not heard while out canvassing: “All politicians are the same; they never keep their promises!”? This party has a history of Blairism, following Tony Blair into wars and carrying out Neo liberal policies, for example, health cuts and cuts to regional budgets.

Social cuts and tax refunds to the rich

In a country that has thousands of millions in the bank because the state owns the profits of the nationalised oil, the workers are still left poorer and poorer. Young people coming out of school or university are not able to find decent employment, or housing. This is the first time since the second world war that children are worse off than their parents. Hoyre (The Conservatives) have continuously moved money from the state to the billionaires in a heartless and uncaring way.

They have cut funds that help children who are struggling mentally. Elderly people have had the funds cut for cultural activities in nursing homes. Holiday pay for the unemployed has been finished and child allowances for the disabled cut. Kindergarten fees have been allowed to rise and payment for physiotherapy for the chronically ill has been introduced.

A subsidy scheme for long-term asylum children has been removed. Free legal aid has been cut. Commuter tax deductions have been cut and supplementary pensions for surviving marital spouses reduced. Support for spectacles and dental treatment for young people has been cut. Pension payments for the disabled have been reduced.

And all the while during the election the government lied about how ordinary working men and women have never had it better. For eight years, ordinary people have seen that the richest have become richer and richer. The Conservatives were proposing to increase the differences even more by promising to cut another six billion kroner from the taxes on the richest 1% in the country.

The main slogan of the Socialist Left Party (SV) “For the many and not for the few” – has been very popular during the election. They increased their vote from 6% in April this year to 7.4% by September. The party also has a very well thought out environmental policy. They explained the environmental crisis but did not draw the final conclusion that to get rid of environmental problems we will need to get rid of capitalism.

The Socialist Left Party (SV) has a very good programme of reforms. They call for the reversing of all cuts carried out by the Conservatives (Høyre). They call for ending the payment for SFO (School Free Time). Because the school hours in Norway are short, children are taken care of by trained staff for sports, chess swimming etc. so that the children are not wandering the streets. This is unfair for lower-paid parents. Another reform in the Socialist Left Party (SV) programme held that because teeth are a part of bodily health, dental treatment should be free to all.

Now that the Socialist Left Party (SV) have got a good result, the party has to make sure the leaders fight for socialist policies. We say: