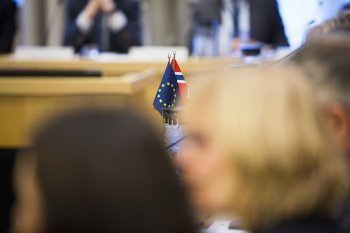 Norway has an array of agreements with the EU. The second major agreement is associate membership of the Schengen Area, making Norway part of the EU’s common external border control. Schengen has also been controversial but is not a major issue in the current election campaign.

Norway has historically, culturally and economically close ties to the United Kingdom. When the UK left the European Union, a substantial share of Norwegian exports to the EU also left the single market. In 2018, 77 percent of all Norwegian exports of goods went to the EU. In 2020, post-Brexit, the percentage dropped to 58.6. The UK is a major market for seafood and energy from Norway, as well as offshore services. What’s more, the UK-EU Trade and Cooperation Agreement is an interesting example of free trade without transfer of sovereignty to Brussels, and Norway (along with Iceland and Liechtenstein) has already negotiated a similar agreement with the UK.

Despite this, Prime Minister Erna Solberg et al. continue to embrace the same message: that Norway must have the EEA Agreement to sell goods to the EU. This argument has always been misleading. Norwegian industry had duty-free access on exports to the EU before the EEA—and this free trade agreement would still apply if the EEA Agreement was terminated.

Norwegian leftists are somewhat divided on Brexit. Some emphasise the right-wing elements of the UK campaign, and think this discredits the entire leave process. Others argue that as Brexit is now a reality, we should consider whether there are any new opportunities on how to handle trade and cooperation in Europe.

The main news outlets have focused on the difficulties of the Brexit process, arguing by implication that Norway is better off with the EEA. Brexit has so far not had any significant impact on the case for a Norwegian withdrawal from the EEA, but this could easily change as the dust settles and trade between the UK and EU returns to normal.

The policies of the nine parties in parliament on Norwegian EU membership and the EEA Agreement.

EU membership is not an issue in the election campaign—it is obvious that the next government will not be sending any application to Brussels. It is also pretty certain that Norway will not leave the EEA within the next four years. What is up for discussion, however, is an official research project, or Norwegian Official Report (NOU), on alternatives to the EEA Agreement. This is a demand put forward by leftist parties—the Red Party, Socialist Left Party and Centre Party—and also trade unions such as Fellesforbundet, the largest union organising the private sector. The Labour Party does not want an NOU, but has not closed the door entirely. This will be a hot potato after the election if there is – as expected – a majority for a new government.

Controversy over energy and public railways

Norway and EFTA partners Iceland and Liechtenstein have the legal right to reject new EU legislation before it is written into the EEA Agreement. A key issue now is whether Norway should implement the EU’s Fourth Energy Package on clean energy. The Red Party, Socialist Left Party and Centre Party wish to reject all or most of the package. These parties also want to withdraw Norway from the EU energy regulator ACER, because they find the transfer of sovereignty to be too far-reaching. The Labour Party voted in favour of joining ACER, but was split down the middle, and has not yet taken a position on the Fourth Energy Package.

Norway is a major producer of energy. The European Commission wants to link Norway as closely as possible to the EU Energy Union. Hardly anything matters more to the backbone of Norwegian industry than long-term access to electric power at competitive prices. New and planned cables for exporting electricity to the continent and the UK are resulting in Norway importing higher electricity prices the other way. This is perceived as a threat to industry providing jobs across the country. The parties opposing ACER argue that the renewable hydroelectricity is needed in Norway to transform and reduce emissions from industry, and to phase out fossil fuels in the transport sector.

Another major EEA issue is the EU’s Fourth Railway Package, which makes tenders on rail transport—currently state-owned and state-run—compulsory, in addition to transferring authority concerning access and safety on Norwegian railways to the EU Agency for Railways (ERA). In this case, the Red Party, Socialist Left Party, Centre Party and Labour Party all wish to reject the package, as they want the railway to be in public hands. The Greens are also opposed to the EU regulations, fearing that compulsory liberalisation will make it more difficult to improve and expand rail transport.

The parties critical of the EEA Agreement—Red, Socialist Left and Centre—are set to gain many new seats in parliament. There will still be a majority in favour of the EEA, but also a historically strong minority opposed to it. Furthermore, research by No to the EU indicates that there will be a clear majority that is open to rejecting controversial EEA legislation (Nei til EU 2021).

The election on 13 September is shaping up to be the beginning of a more critical approach by Norway towards EU market laws and also the EEA as such.

Morten Harper (b. 1973) is research manager of No to the EU (Nei til EU), Norway’s main organisation working against membership of the European Union, and a member of the EU/EEA committee of the Socialist Left Party (SV).

Imperialism and its discontents