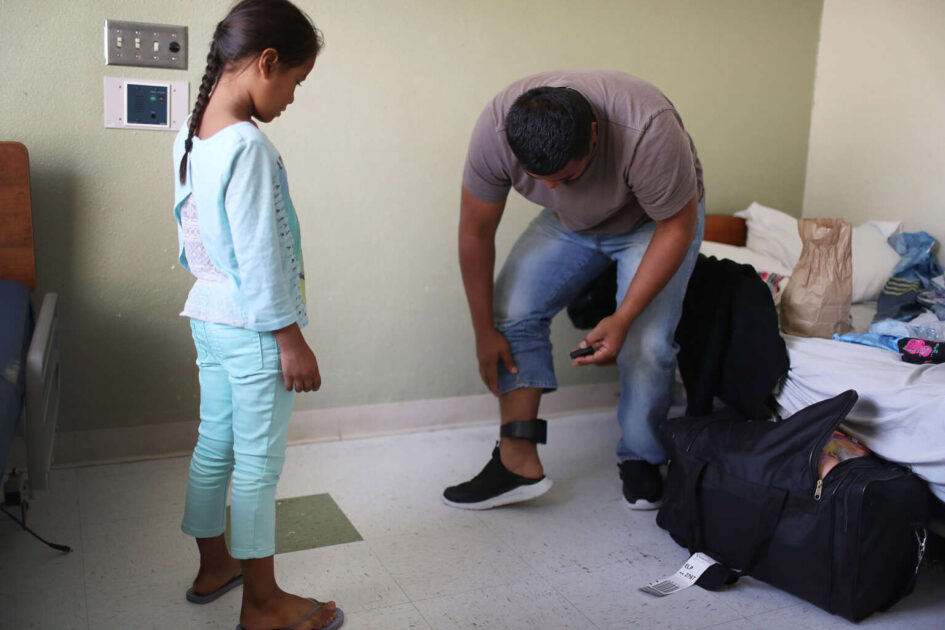 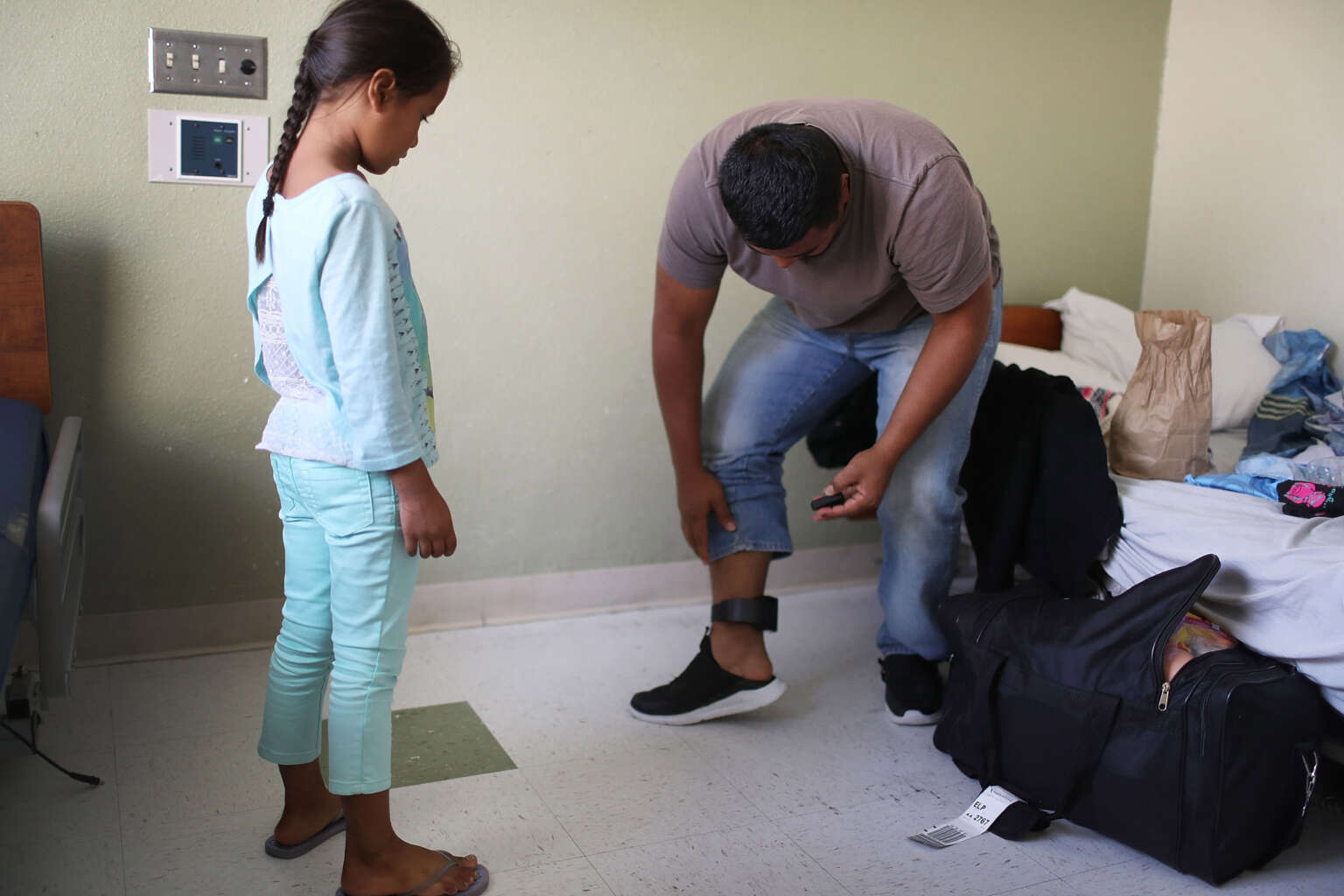 Above Photo: Selena watches as her father Luis (only first name was provided) works on changing the battery in his ankle monitor as they are cared for in an Annunciation House facility after they were reunited on July 26, 2018, in El Paso, Texas. (Joe Raedle / Getty Images)

Surveillance technologies like ankle monitors and cellphone apps are not harmless “alternatives” to immigration jails.

There is no acceptable justification for this rapidly growing surveillance dragnet. As advocates working toward the abolition of immigration detention, we are outraged that the Biden administration is increasingly turning immigrants’ homes and communities into an extension of prison cells.

Our vision must extend beyond abolishing immigration jails themselves, as they are only one part of a larger racist, exclusionary system that targets and harms our communities. Especially now as far right extremists and their enablers leading the Republican party ramp up their attacks on democracy, we need to turn up the pressure on President Biden to scale back this cruel and abusive surveillance system, which only exists to harm and punish people.

Surveillance systems and tools like ankle monitors, cellphone apps and case management are not harmless “alternatives” to the immigration jail system, no matter how the federal government spins it.

ICE’s “alternatives to detention” only further entrench and expand the enforcement and detention system rather than reduce reliance on detention.

The rise of ICE’s “alternatives to detention” and immigrant jails are inextricably linked. ICE operates both the largest detention system and the largest electronic monitoring program of any U.S. law enforcement agency. Over the last two decades, as funding for immigration jails has soared, so has funding for ICE’s ATD surveillance program. The result has been massive increases in both the number of people jailed by ICE and the number of people surveilled by the agency, despite a drop during the first year of the COVID-19 pandemic.

Although not always confining people to the four walls of a jail or prison, the U.S. government and more specifically ICE has designed its ATD surveillance program to criminalize and stigmatize immigrants, and to restrict their ability to live and move freely. Like other forms of criminalization and confinement, the ATD program is based on the premise that the government can and must deter, coerce, detain, surveil, manage or punish certain communities to exclude them from social, economic and political life in the U.S.

ICE’s “alternatives to detention” cause lasting physical and psychological trauma. Physical harms from ankle monitors include burns, bruises and shocks while frequent malfunctions and onerous reporting requirements put people in danger of being re-detained. Regardless of the form they take, ATDs stigmatize people and prevent them from participating fully in their communities by making it difficult to obtain jobs, perform day-to-day tasks and fulfill family obligations.

Though ATDs are touted by some as a more humane option, ATDs lead to more people caught in the immigration enforcement system. ICE uses detention to achieve deportation and exclusion through criminalization, stigmatization and coercion. ATDs in any form do not disrupt this broader scheme; rather they fit squarely into it by focusing on compliance outcomes as justification for their existence.

For example, many have turned their attention to case management or opt-in services to support people navigating their immigration cases as an alternative to electronic monitoring and other methods ICE currently uses. However, case management funded and managed by the federal government serves the same purpose as detention: to ensure compliance and facilitate eventual deportation. By focusing on compliance rates, the emphasis is on an individual’s success or failure instead of on the systemic failures of the immigration and deportation system and U.S. immigration law. We owe it to our communities to always keep this bigger picture at the forefront and fight for solutions that lead to true liberation.

As we fight to abolish immigration jails, we must oppose the creation and expansion of different forms of movement control and surveillance. There can be no alternative to a system that should not exist in the first place. We imagine a world where every individual lives and moves freely, and a society in which racial equity is the norm and immigration is not criminalized.

President Biden has the power to drastically scale back this deadly system of confinement and surveillance. Even as the Republicans focus their demagoguery toward immigrant communities and drive a post-midterm agenda steeped in xenophobia and white supremacy, we must hold President Biden and his administration accountable for his campaign promises to immigrant communities.

With the incoming threats of a Republican-led House, including the potential impeachment of Department of Homeland Security Secretary Mayorkas, President Biden must finally stop doubling down on hateful Trump-era policies and implement policies that protect and support our communities. The Biden administration should take bold action in the second half of his term by reducing the number of people detained by ICE, shutting down ICE’s immigration jails, and drastically cutting funding for immigration detention and surveillance in his fiscal year 2023 funding request.

As Republicans in Congress double down on their attacks on immigrants, President Biden must live up to his promises to protect our communities by acting now to close immigration jails and reduce the use of ATDs. The only alternative to “detention” is freedom.

A Year In, Working People No Better Off Under Biden

Not a Nation of Immigrants

A ‘Day Without Immigrants’ in Houston