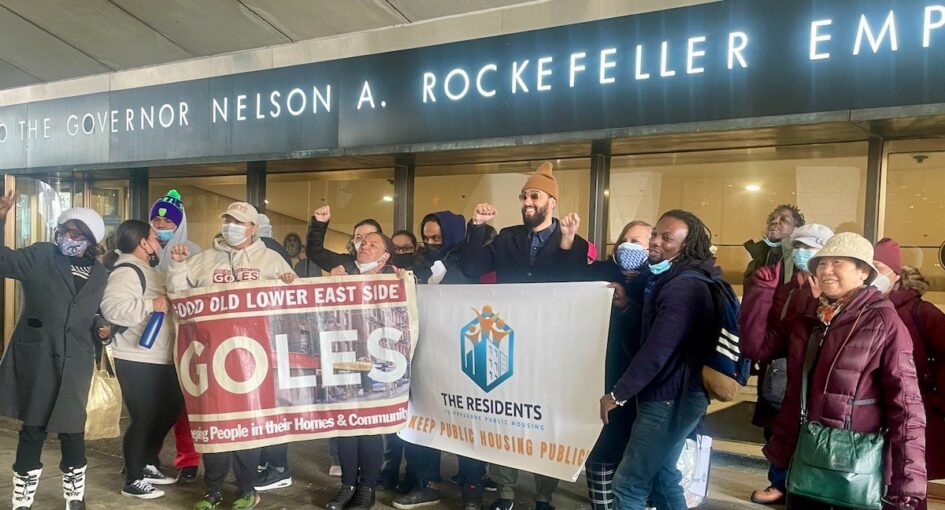 On March 10, New York City renters and tenants of Residents to Preserve Public Housing (RPPH) occupied the state capitol’s Million Dollar Staircase in Albany and held a rally there to oppose the Blueprint for Change bill proposed by New York City Housing Authority (NYCHA). The bill in question planned to transfer traditional public housing Section 9 funding to a Section 8 voucher system, which would have removed funding from NYCHA directly and relied on private investors to manage the buildings and maintain the billions of dollars needed for the long list of backlog repairs and to address the lack of heating and clean water, or apartments in run-down conditions.

Thanks to fierce organizing, tenants and organizers won a hard-fought victory that day. Their tenacious struggle won support from Assembly Members Khalil Anderson, Marcela Martinez, Harvey Epstein, Chantel Jackson, and State Senator Brian Kavanugh, who were present at the event. The Blueprint for Change bill was ultimately rejected on the legislative front.

In addition to opposing the Blueprint, RPPH organizers are demand that the City of New York save NYCHA and provide more support to tenants’ associations, as well as more federal funding be diverted to the Emergency Rental Assistance Program (ERAP), and the launch of an Emergency Repair Program.

Different names for turning public housing over to private developers

In July of 2020, NYCHA CEO Gregory Russ proposed the Blueprint at the New York Housing Conference as a “solution” for fixing up its 300+ development houses, and addressing NYCHA’s more than $40 billion backlog in repairs.

Critics of the Blueprint, however, say the plan would have privatized public housing, taking away Section 9 tenant rights and ultimately making the apartments too expensive for most individuals and families who rely on such housing.

Other forms of privatization, such as Rental Assistance Demonstration (RAD) which the city claimed the same promises for, have hurt tenants. For example, in the Ocean Bay public housing complex in Queens, the first NYCHA campus to be privately administered under RAD, evictions jumped to the highest rate rate of any NYCHA development within the city. Additionally, a recent report commissioned by TheCity found that RAD private investors have failed to deliver the promise of adequately renovating NYCHA developments.

RPPH steering committee member Robert Hall was among the speakers at the event, and he stressed the importance of the Blueprint’s consequences. “If you privatize housing, you’ve just spread homelessness,” Hall said. “We have nowhere else to go … people need a place to live.”

Despite the victory, RPPH had struggled in the past to gain the attention of authorities. Hall said U.S. Senator Chuck Schumer, New York City Mayor Eric Adams and State Assembly Speaker Carl Heastie all claimed they would support the tenants’ demands, yet were visibly absent from the demonstration. A petition signed by 20,000 people demanded former Mayor Bill DeBlasio preserve public housing, yet he ignored those demands.

In marked contrast, the Cathy Rojas for NYC Mayor campaign of the Party for Socialism and Liberation met with RPPH during Rojas’s run last year. Both the campaign and RPPH shared the same demands including: the removal of Russ from his position as CEO of NYCHA, the allocation of major funding to support full public housing, the repealing of the Faircloth Amendment limiting the construction of new public housing, and ending the privatization of all public land and housing.

At the rally RPPH demanded $3.4 billion capital funding for NYCHA, $2.8 billion funding for operation funds that would include hiring tenants to improve NYCHA apartments and $1 billion investment for housing authorities outside of NYC.

Money for housing, not for bombs

Organizers at the rally decried the U.S. government funneling funds into the military, while ignoring the ongoing housing crisis.

“Housing is our right as human beings,” said Aixa Torres, the Resident Association President of Alfred E. Smith Houses public complex. “We have to protest to get a lousy $3.4 billion dollars when we have a trillion dollar budget [for military and defense spending] for this country.”

In New York, the police department alone has a $6 billion budget in the current fiscal year, $4 billion more than last year despite the historic Black Lives Matter and Defund the Police movements.

With their recent victory, RPPH has taken the time to celebrate but remained vigilant. The fight still continues to pressure other legislators to improve the developments owned by NYCHA, as well as expanding social safety nets to ensure housing as a human right for all Americans.