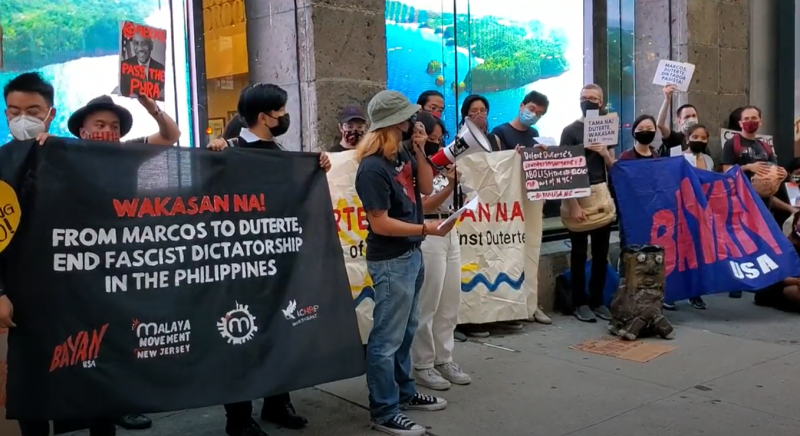 Protest against repression in the Philippines.
(Fight Back! News/staff)

New York, NY – On September 21, BAYAN North East and affiliated organizations rallied and marched to mark the 49th anniversary of martial law imposed by then-Philippines Dictator Ferdinand Marcos and to oppose the repression unleashed by the current President Rodrigo Duterte.

The event began at 4:30 p.m. in the Dag Hammarskjöld Plaza near the United Nations, where President Duterte was speaking at the General Assembly. All this was happening as the International Criminal Court was launching an investigation of the ‘war on drugs’ in the Philippines, which has killed over 26,000 people and resulted in countless human rights violations.

Once the first rally ended, forces marched to the Philippine Consulate where they were joined by even greater numbers. Up 75 people loudly chanted and denounced the horrific dictatorship, martial law and the Duterte regime.

As Duterte’s presidency comes to an end, the national democratic movement and its allies are still faced with his presence looming over. He has launched a vicious red-tagging campaign that targets anyone who disagrees with his policies. He is also running as vice-president in an effort to remain in power.

However, the protesters were not demoralized by Duterte nor his tactics. Instead, speeches recalled the valiant struggle against the Marcos dictatorship, addressed what the national democratic movement is currently doing and noted how repression will always be met with resistance.

Collin Poirot, a member of the New York Community Action Project, spoke on behalf of the National Lawyers Guild. He said that many times, the legal defense is one of the last strategies when it comes to state repression, and it’s vital that people’s lawyers stand in solidarity with the workers and communities fighting against dictatorship.

While the struggle against Duterte’s regime continues, forces in New York and New Jersey are ready to meet the challenge head on.

Labor power, the Law of Value and social production as an emergent property

El Salvador: Bukele’s Bitcoin Law is rejected by the masses!