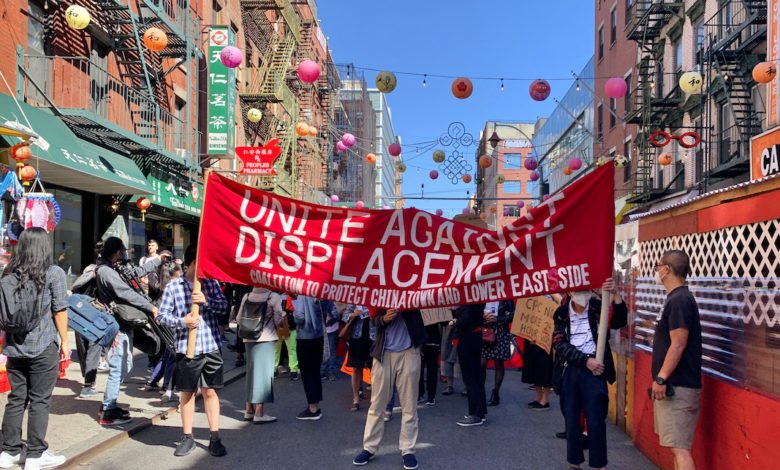 Hundreds of protesters marched through the streets of Manhattan Chinatown on Sept.26 to demand an end to displacement and racial violence against the community’s working class.

The demonstration was organized by a coalition of groups including the National Mobilization Against Sweatshops, the Coalition to Protect Chinatown and the Lower East Side, Youth Against Displacement, and Youth Against Sweatshops, and it targeted three culprits as forces of exploitation and gentrification within the Chinatown community: the Chinese-American Planning Council (CPC), the Museum of Chinese in America (MOCA), and real estate developer Jonathan Chu. The Party for Socialism and Liberation was among the organizations that attended in solidarity, and politicians such as newly elected City Council Member Christopher Marte and New York State Senator Robert Jackson were in attendance as well.

Organizers laid out four demands ahead of the march: that CPC end its 24-hour workdays for its home care attendants; that MOCA use the $35 million it had received from the city of New York to fund the recovery of workers and small businesses affected by the pandemic; that Chu reopen the Jing Fong dining hall he had closed earlier in the pandemic, leaving its unionized staff without work; and that all parties apologize to the workers of the Chinatown community.

While the demands against CPC, MOCA, and Chu may appear to be three separate struggles, these institutions and individuals represent an elite petite bourgeois class that claim to speak for the community, deploying identity politics to obscure class contradictions and their own exploitation and displacement of Chinatown workers.

While CPC claims to “empower” Chinese American and immigrant communities, activists accuse the social services nonprofit of regularly scheduling its home care attendants — a largely immigrant, women of color workforce —  for 24-hour shifts, often for days in a row, exploiting a loophole in New York State law that prevents limiting the number of hours employees can work.

In addition to allowing these 24-hour shifts, New York State law only requires employers like CPC to pay home care attendants for 13 hours, as long as the attendants receive eight hours of sleep and three hours for meals. Activists, however, claim this does not reflect the realities of home care, and attendants often end up looking after their patients for the full 24 hours without full compensation.

Organizers have similarly accused MOCA of cynically weaponizing the politics of identity to disguise racist violence. In 2019, when Mayor Bill de Blasio announced the closure of the jail complex on Rikers Island, he also included in the plan an $8 billion allotment to build four new jails across the boroughs, one of which would be located in Chinatown. As a concession to the communities impacted by these new jails, the plan included funding for “new neighborhood investments,” of which it gave MOCA $35 million. In accepting this funding — what some have called a “bribe” — critics accuse MOCA of supporting the city’s racist program of mass incarceration, all under the guise of preserving Chinese American heritage and culture.

And critics have also targeted Chu, a real estate developer and co-chair of MOCA’s Board of Directors, in the ongoing displacement of workers and small businesses in Chinatown and the Lower East Side. In May, Chu, hoping to vacate and develop the property, terminated the lease on the dim sum restaurant Jing Fong, forcing the closure of one of the few unionized restaurants in the city and leaving nearly 200 workers out of a job in the middle of a pandemic.

“These are people who not only look down on their own community, but then they will tell the whole world that ‘I represent the Asian community,’” explained Zishun Ning of the Chinese Staff and Workers’ Association. “The system knows exactly that in our community we have these sell-outs who gladly accept their bribe … And then [MOCA] will say, ‘Well, we can’t save Chinatown, but at least you can allow me to put you in our museum exhibit!’ They’re not fighting racism as they claim! They just want a seat at the table and share [in] the exploitation! This is the mentality of MOCA, CPC, and all these sell-out institutions.”

The action began at 11 a.m. in front of the CPC offices on Elizabeth Street. Organizers rallied supporters and drew attention to the nonprofit organization’s exploitative labor practices, which have directly resulted in physical and emotional trauma for its workers.

Speaking in Cantonese, retired home care attendant Chu Mei Kum took the stage and described to the crowd the immense physical toll these shifts had taken on her body.

“I retired because I fell down due to sleep deprivation while working years of 24-hour shifts,” Chu said. “Both my hands are now disabled. I cannot lift anything, I have insomnia, and my condition is getting worse and worse. CPC will hurt hundreds and thousands of home attendants. These are our sisters! This is racist everyday violence that’s more cruel than beating us on the street!”

Another former CPC home care attendant, Melania Batis, addressed the crowd in Spanish and detailed how the exhaustion from years of working these long shifts rapidly led to her deteriorating mental health.

“I worked twelve years of 24-hour shifts,” began Batis. “When I worked 24 hours, I worked three, four, five days a week. I didn’t sleep, because at night I had to turn the patient over every two hours. In the day you’re sleepy, but you can’t sleep because you have to help the patient. You get frustrated. Without sleep and with all this stress, the mind gets cloudy from being inside all this time. You don’t know where you are, where you’re going. When I would sleep in my own home, my partner would tell me that I could cry out in my sleep the name of my patient. ‘Abigail! Abigail!’”

Batis also recalled how the constant state of working isolated her from her loved ones.

“Twenty-four-hour shifts destroy your family, destroy your relationship with your children, cools your relationship with your partner,” she lamented. “I have four kids. I would return home, and then I would try to hug them. They didn’t want to. They said I had abandoned them. They said I wasn’t there when they were going to bed. I wasn’t there when I got up. Children don’t understand. They started to blame me.”

The rally then turned into a march through Chinatown with organizers leading chants in both English and Cantonese. “Chinatown is not for sale!” they shouted, marching along Canal Street. “How do you spell racist? M-O-C-A!” Volunteers meanwhile handed informational flyers to curious pedestrians.

The march finally concluded in front of MOCA, where organizers held a second rally, this time targeting the museum and Chu. There, they emphasized the racist displacement and violence that Chu and MOCA were actively involved in.

“As you heard, over 180 workers were laid off when [Chu] forced Jing Fong to close,” began Nelson Mar, President of 318 Restaurant Workers Union, which represents the Jing Fong employees. “But since that time, the workers have been out here trying to demand accountability, because no one is unaccountable to the community!”

In order to hold those accountable, Mar then announced that the union would be escalating its pickets in front of MOCA from two days a week to five and that a GoFundMe had been set up for the laid off Jing Fong workers.

These Chinatown struggles between the workers and petit bourgeois elites are symptomatic of a larger overall trend of those in power cynically co-opting identity politics in order to obscure the antagonisms of class relations. Here in New York City, Democratic mayoral candidate Eric Adams, along with the political machine behind him, has presented himself as a representative of the Black community, while accepting over $283,000 in campaign donations from real estate developers in this race alone, and at least $322,750 from developers and lobbyists between 2015 and 2019 while Brooklyn Borough President. A New York City under Adams would translate to further gentrification, further displacement of the working class.

And while Lloyd Austin is often celebrated as the first African American appointed to Secretary of Defense, he also, before his appointment, served on the Board of Directors for defense contractors Raytheon and Booz Allen Hamilton, directly profiting from the U.S. war machine that kills poor and working people overseas.

What these elites’ claims to representation attempt to conceal are these unmanageable class contractions that capitalism produces. The conflicts in Chinatown are really struggles against poverty, labor exploitation, mass incarceration, and gentrification, which are part of the broader class struggle against capitalism itself. The task at hand demands that we build a united multi-racial, multi-national working class movement to confront it.

Support the laid off Jing Fong workers by donating to their GoFundMe.

Understanding Exploitation through the “Saweetie Meal”

The Other Pandemic: Violence Against Healthcare Workers