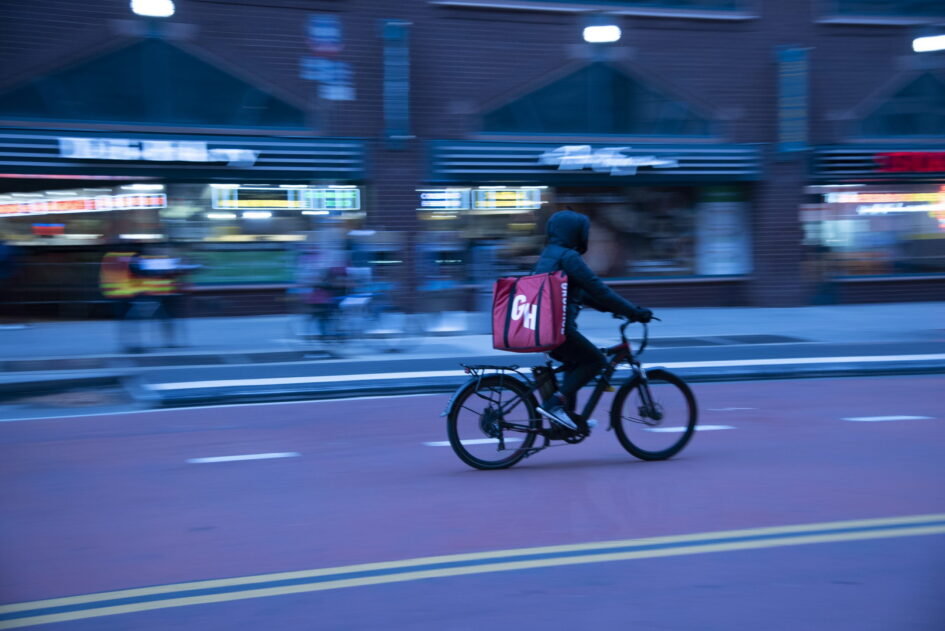 The New York City Council’s recent legislation promises “protections” for some of the city’s most vulnerable workers—the 80,000 food delivery drivers that can be spotted on nearly every city street. However, a closer look at the law raises the question: how can we really guarantee a decent living for delivery workers?

The COVID-19 pandemic made it clear to all just what the capitalist class thinks about society’s most vulnerable workers. These workers risked their lives at the height of the pandemic to ensure that food and vital supplies reached families and those trapped at home.

Without the restaurant workers, grocery store clerks, and delivery drivers, who continued to leave their homes every day as the virus spread, the lockdowns would have been unthinkable—those lucky enough to work from home would have been forced to venture out into the virus’ deathtrap to stock up on food and essential household items. And yet, despite record profits for the capitalists, some of these workers were offered little more than a few dollars “hero pay” for a short period. In the worst and most common situations, many workers were left risking their lives for low pay and no benefits.

Among these are the food and grocery delivery workers who sell their labor-power to giant tech companies like Uber, DoorDash, and Instacart. These workers don’t even make a minimum wage, but rather are paid a “base fare” for each delivery they make, and whether they receive a living wage at all depends on how much they can collect in tips. A survey found that, on average, delivery workers in NYC make around $13 an hour with tips. The median hourly wage amounts to less than $8 without tips, just over half of NYC’s $15 minimum wage. Although many delivery workers report that they work six days a week or more, they are not classified full-time employees, but as “independent contractors,” and as such, are entitled to none of the rights and benefits of the former in the eyes of the bourgeois government.

Over the past two years, working conditions have worsened for food delivery workers. Not only have they risked their health and wellbeing, but they have also been forced to work in dangerous weather conditions, which are increasingly common as a result of climate change. For example, as the streets of New York City flooded last September during hurricane Ida, destroying homes and shutting down the subway, images surfaced online of food delivery drivers braving the storm, presumably unable to afford to take the night off. Such dangerous conditions didn’t merit a pay raise—although the Uber Drivers’ iPhone app was kind enough to send a notification reminding its workers to “be careful” riding their bikes in the city’s torrential streets.

During the summer’s scorching heat and the winter’s freezing cold, workers are forced to stand outside (sometimes for hours at a time) waiting to receive an assignment, as they are typically not allowed by restaurant owners to sit inside to cool off or warm up—or even to use the bathroom.

A new business model for the “gig economy”

While food delivery platforms claim to care about ensuring a decent living standard for their workers, this is meaningless in practice. The goal of companies like UberEats and Doordash—like every other company—is to squeeze as much profit out of their workers while paying them as little as possible. The business model of the food and grocery delivery companies relies on gathering billions of dollars from Silicon Valley investors by promising to keep costs low—and thereby, profits high—passing off the cost of labor and technology by charging “service fees” to restaurants and customers, and relying on tips to cover nearly half of delivery workers’ wages.

However, after accounting for the costs they do bear—e.g., spending on programmers, advertising, and customer refunds—the delivery-app industry has struggled to realize significant profits. That’s not to say that their executives aren’t rewarded handsomely. For instance, the CEO of GrubHub, Matthew Maloney, has raked in over $8 million in total compensation. And these are just measly crumbs compared to the $414 million in compensation that Tony Xu, the CEO of DoorDash enjoyed in 2020.

It’s hard to see the industry as anything other than a cynical scheme to make a few rich capitalists even richer. DoorDash can cite “low profitability” as an excuse for how it treats its workers. It also uses this to justify passing on costs to the workers who use these services, and to the petty-bourgeois who own the restaurants that rely on them.

The new law includes some useful measures, such as requiring restaurants to allow delivery workers to use the bathroom. But there is no mention of how this might be enforced, and the threat of a $100 fine for businesses that don’t comply is little more than a finger wag. Mayor Adams has made it clear that he thinks the city government should not rigorously enforce violations on small businesses—so will the City simply look the other way?

Unsurprisingly, the capitalists behind the food delivery apps fought tooth and nail against even these meager concessions, which stop short of classifying delivery workers as employees. They have also been crying crocodile tears for restaurant owners and consumers, who they warn will be the ones to bear the cost of any wage increases. This is a shameful tactic designed to pit workers against “consumers” (i.e., other workers) and against the restaurant owners who rely on these food apps for business, but who are already forced to pay up to 50% of an order’s income in fees to the apps. Under capitalism, a win for one section of workers is made possible only at the cost of another section of society. What is necessary is for the capitalist class themselves to pay higher wages—but this will only ever happen as a result of militant class struggle methods on the part of delivery workers, united with the broader working class of the city and the country.

Which way forward for delivery workers?

While this particular piece of legislation is largely a result of pressure by activist organizations, we have also seen some minor concessions being wrung from the delivery app companies by the actions of their workers. The clearest example of this was earlier during the pandemic, when 150,000 Instacart “shoppers” threatened strike action, prompting the company to offer measures such as free PPE and minor wage increases.

However, this has not resulted in significant wins. These measures have either been rolled back or made obsolete. For instance, while UberEats also promised “free PPE,” this promise was qualified with the classic phrase—“while supplies last”—and was available only in limited quantities, not enough to cover most workers’ needs. And while Instacart promised to ensure higher wages and tips, this too has failed to materialize as the pandemic became less severe and the demand for grocery delivery declined, leaving many delivery workers without enough gigs to pay their bills. Because they are “independent contractors” who are paid only when working on a delivery—not when waiting for one—these workers were simply told: “tough luck.”

Without organization, as Marx explained, the working class is merely raw material for exploitation. But strikes by gig workers have proven challenging to organize. Especially in an industry where workers are atomized as much as food delivery workers, every worker is left to fend for themselves—and pitted against each other in competition. Many workers, who may be afraid to strike for any number of reasons, or may not be able to afford to take time off, would easily be able to cross a “virtual” picket line in an attempt to grab excess shifts.

Several activist groups—some composed of delivery workers themselves—have been fighting on behalf of delivery workers in general and demanding the right to organize. The most well-known are Los Deliveraristas Unidos, a collective of primarily immigrant food delivery workers in NYC, who played a part in getting the recent legislation off the ground. Such efforts are an important first step in organizing these workers and helping them become conscious of themselves as a class. While the Marxists fully support such efforts, we would suggest that they have the best chance of success only if they are linked up to the efforts of the broader working-class movement. Furthermore, the delivery workers of New York City will find it difficult to win their demands if they limit their struggle to the confines of a single city, let alone a single sector of the food industry.

The only thing that can guarantee decent living conditions for delivery workers is class struggle. The NYC Central Labor Council leadership and the foodservice unions should be in the vanguard of this fight. For instance, if delivery workers were given the opportunity to join the United Food and Commercial Workers International Union or the Hotel Employees and Restaurant Employees Union, they could add their tens of thousands to the ranks, with the power to completely shut down grocery stores and restaurants all over the country. Such a strike would demonstrate the enormous potential power that lies in the hands of a united working class and the essential position they occupy in society.

The demands of such a movement would have to appeal to all workers involved, including delivery workers. The latters’ plight could be solved by nationalizing the food delivery companies under workers’ control. Small restaurants would also benefit from this, as instead of paying exorbitant fees to the wealthy capitalists, they would have the option of voluntarily integrating into a socialist planned economy, which would operate on the basis of social needs, not the private pursuit of profit.

The COVID-19 pandemic has shown us who is really “essential” to the functioning of society—the working class. Our collectively task in the next historical period is to transform society in the interests of our class.