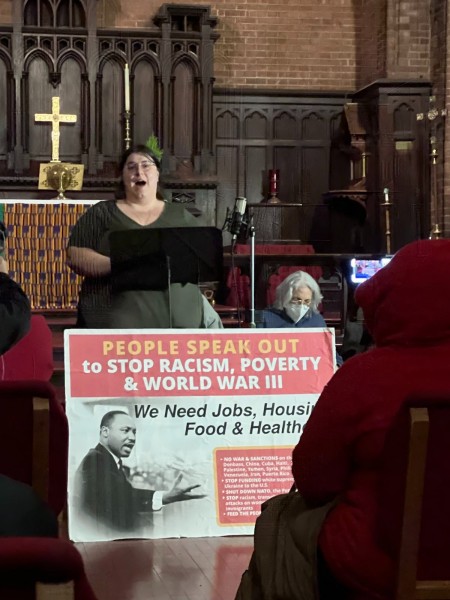 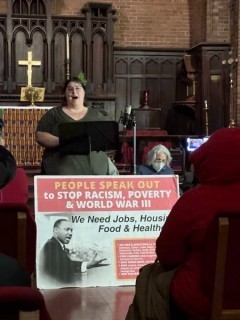 Michela Martinazzi, of the International League of Peoples Struggle.
(Fight Back! News/staff)

New York, NY – Around 60 people gathered in the historic Saint Mary’s Episcopal Church in Harlem to honor the legacy of Doctor Martin Luther King Jr. on what would have been his birthday weekend. Organized by Struggle-La Lucha, a panel of 11 speakers took part in the event that demanded: No war and sanctions, strop funding white supremacy in the Ukraine, shut down NATO, and stop racism, transphobia, union busting, and the attacks on women’s rights, LGBTQ+ and immigrants.

Jessica Schwartz gave a speech on behalf of the Freedom Road Socialist Organization, where she said, “Too often, socialism and national liberation are seen as separate ideologies, when in fact they go hand in hand. It is revolutionaries like Harry Haywood and Claudia Jones who took the works of Stalin and other Marxist-Leninists and applied it to their own conditions, creating the theory of Black Belt South as part of their struggle for national liberation and self-determination. The Black Panther Party used scientific socialism to fight national oppression and were infiltrated and attacked because of this. Leaders like Thomas Sankara used social programs to liberate his people, only to be assassinated because of the threat he posed to U.S. and European imperialist powers. It is when Black people and other nationally oppressed people use socialism and take on the imperialist powers of the world that they are seen as especially dangerous and need to be taken down.”

Michela Martinazzi closed out the event and spoke on behalf of the steering committee of the International League of Peoples Struggle. In her speech she referenced Dr. King’s famous anti-war speech “Beyond Vietnam”, including the quote, “We were taking the Black young men who had been crippled by our society and sending them 8000 miles away to guarantee liberties in Southeast Asia which they had not found in southwest Georgia and East Harlem.”

She ended her speech by calling out, “We have a massive and tumultuous battle ahead of us. Let’s lean on each other, let’s lean on solidarity, and let’s win the war together. Long live the legacy of Doctor Martin Luther King Jr! Long live international solidarity!”

The event ended with a beautiful live rendition of Solidarity Forever on the piano.

The Legacy of Occupy 10 Years Later

The Abortion Crisis and the Legacy of Activism

The TUEL Legacy and Its Relevance Today