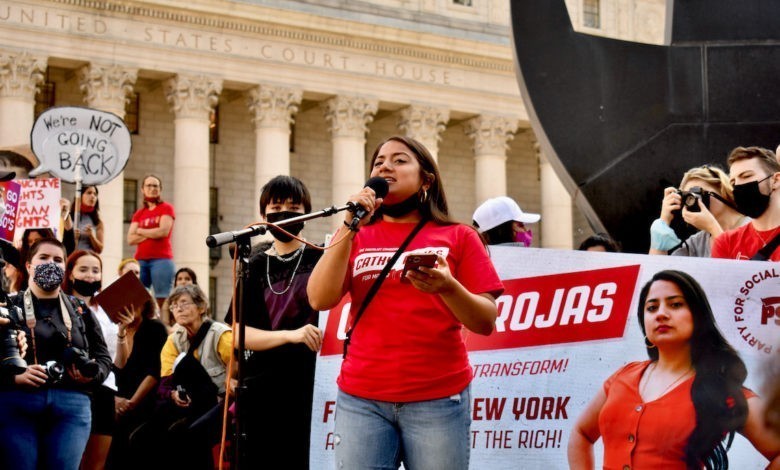 This week, reproductive rights demonstrations were held across the country protesting Texas anti-abortion Law SB 8 and affirming a women’s right to choose abortion. In New York City, the Oct. 2 action of approximately 5,000 was addressed by PSL mayoral candidate Cathy Rojas, to a rousing response. Here is her talk.

Good afternoon everyone, my name is Cathy Rojas. I’m a Queens native, the daughter of Colombian immigrants and a public school teacher. I’m also running for Mayor of NYC. But I’m not here to talk about electoral politics. I’m here to talk about the one thing that actually makes all the difference, and that’s building a powerful non-stop movement.

Texas state politicians say they are trying to protect life; Texas, where people froze to death earlier this year because of climate change, and greedy for-profit electrical companies and the total lack of support from the government; Texas, one of the worst states, if not the worst state, to live in terms of having adequate funding for schools for children, or access to healthcare for women; Texas, with one of the highest rates of hunger and poverty for children.  That is the state that is now leading the attacks on abortion rights and access in this country.

These right-wing politicians responsible for these policies don’t represent the people of Texas. They don’t respect people’s rights and they don’t give a damn about their well-being.

Their claim “to protect life” would be a JOKE if so many lives weren’t actually on the line!

But let’s not lose sight of the maneuver they are playing right now. Right now our people – poor and working people, in Texas, New York and around the country – are in crisis. We are in the middle of a public health crisis, an economic crisis, an educational crisis, a climate crisis, you name it. But instead of dealing with the real issues, rightwing politicians are now attempting to distract, divide and paralyze us by intensifying the attack on abortion rights.

You know, I look at what’s happening in Washington, D.C., and in Texas, and you can’t help but notice that politicians, Democrats as well as Republicans, are completely ineffective at passing the most basic reforms and necessities. But they spring into action immediately when it comes to bailing out the banks and ultra-rich, and they always find time to intensify the attack on women and LGBTQ people, immigrants, Black people and other vulnerable communities.

But this is what we’re up against, sisters and brothers – not just a bad law in Texas, but a whole system. That system has at its top a clique of billionaire bigots, their politicians for hire, the courts that do their bidding – all the way up to the Supreme Court–the corporate-controlled media, a whole army of lobbyists, and on the front-line, to keep us in line, the police and ICE.

That’s what we are up against. It might sound scary. But who are we? What do we have?

We are the tens of millions of women and trans and gender nonconforming people who have a direct stake in this fight for abortion access. We are the front-line workers, the overworked and underpaid, the immigrants, the millions in the streets for Black lives, the water protectors, the millions of young people who are fed up with capitalism and saying, “We need system change, not climate change.” We are the MANY.

They have their armies, their activists, their lobbyists, their intellectuals, their media spokespeople. We need to build OURS.

What their side has is organization. They have power because they are organized. We can have power too, but we need to be organized, not just once a year or on election day, but year-round.

And our movement needs to be powered by solidarity. A lot of people don’t know what that means. It’s very simple, it means, “An injury to one is an injury to all.”

Today it’s abortion rights in Texas, tomorrow it could be resisting evictions in Brooklyn, or supporting the immigrant delivery workers in the Bronx, or it could be protesting another Black person killed by the racist police, or it could mean standing with people in other countries who are facing U.S. bombs and sanctions. It’s all connected. It’s all part of our common struggle. Let’s not let them divide us into a hundred separate “issues.”

That’s why I’m proud to stand with all of you today fighting for abortion access and healthcare, because abortion care IS healthcare.

We know that a better world is possible. We know that we are living at a time in history where the resources and the technology and the education exists so that the basic needs of the entire planet can be met: Jobs, housing, education, healthcare, clean energy. Those are not pipe dreams, they are human rights that can be realized for ALL, right now.