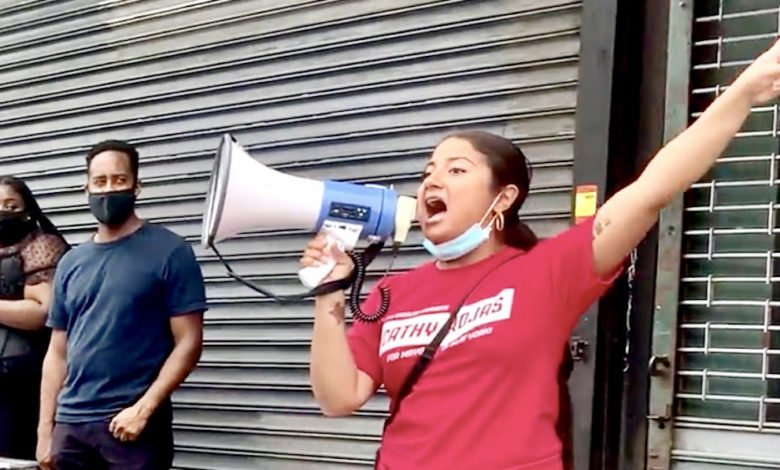 On  Aug 28, New York City socialist mayoral candidate Cathy Rojas and members of the Party for Socialism and Liberation (PSL) gathered for a speakout in Brooklyn and Queens to agitate for an extension to the New York state eviction moratorium. The statewide moratorium was set to expire Aug 31, and, coupled with last week’s news that the Supreme Court would overturn Biden’s nationwide eviction moratorium, Rojas and housing rights advocates saw a need to speak with community members about the urgency of the crisis.

Due to public outrage, as expressed in events like this, on Sept 1 the New York State Legislature voted to extend the eviction moratorium to Jan. 25, 2022, with some restrictions.

At both Aug. 28 events, Rojas introduced herself as a fellow worker, tenant, and organizer. Speaking to community members, she described her housing platform for New York City, which would include the cancellation of rent and mortgage debt accrued through the pandemic; create a rent-controlled city in which landlords would be unable to charge more than 20 percent of tenant’s income for rent; the guarantee that public housing stay public, funded, and in proper living condition; and the conversion of vacant units to permanent, safe, affordable housing for all New Yorkers.

Rojas listened to the needs and concerns of the communities and discussed the transformative potential of socialism in New York City and beyond. The positive response from pedestrians, passersby in cars, and businesses was palpable—New York City is ready for change and ready to be part of the movement towards it.

In the Brooklyn neighborhood of Bed-Stuy, dozens gathered in the high traffic intersection of Fulton St. and Nostrand Ave. as PSL organizers named the attack on housing as an inherent feature of the capitalist system — one that prioritizes profit over the lives of working people. They discussed the discriminatory practices of evictions, gentrification, and privatization of public housing and emphasized the necessity to unify working people in knowing their rights, to organize, and to build numbers.

Speaking to pedestrians, Rojas indicted the capitalist system that prioritizes profit over affordable housing and the working class.

“Two million New Yorkers are about to be without a home … after we broke our backs for this city during the pandemic, after Jeff Bezos and millionaires and billionaires were making billions while we were dying,” stated Rojas. “We’re about to be evicted and left houseless. Why? Because we live in a system that protects profit at all costs.”