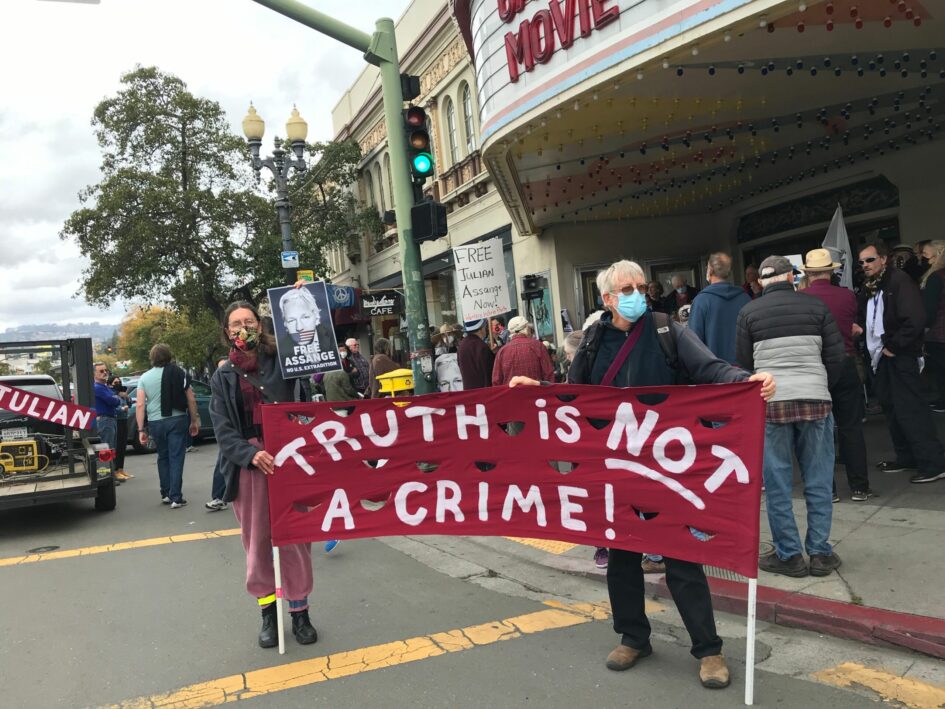 Oct. 23 — A broad coalition of antiwar and anti-imperialist groups converged here at the Grand Lake Theater, known for its historical strong support for free speech, to demand the U.S. government drop all charges against Julian Assange and stop all extradition plans. 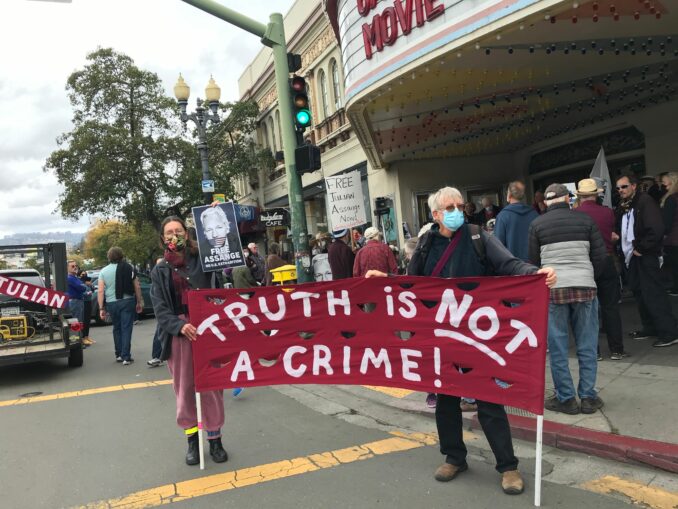 Assange, the founder of WikiLeaks, is currently being held in prison in Britain awaiting extradition to the U.S. Today’s rally was part of an international effort to protest a hearing scheduled for Oct. 27, when the U.S. will argue for his immediate extradition to this country.

Assange is charged with conspiracy to publish secret U.S. military documents leaked by Chelsea Manning, former Army intelligence analyst, that exposed U.S. war crimes in Iraq and Afghanistan. The campaign to force Assange’s extradition to the U.S. has been a bipartisan effort by both U.S. political parties and is being led now by President Joe Biden.

The marquee of the Grand Lake Theater boldly proclaimed “Free Julian Assange” over the rally, organized by Free Julian Assange-SF Bay Area. The gathering was a speak-out with taped messages by renowned activists and writers, including such as Mumia Abu-Jamal, Alice Walker and Daniel Ellsberg. Solidarity statements were read by representatives from many organizations including the Haiti Action Committee, United National Antiwar Coalition, Task Force on the Americas, Code Pink, ANSWER and the International Action Center.

Hundreds of people passed by during the rally, stopping on their way to and from a nearby popular farmers’ market, and listened to the many statements demanding freedom for Assange and all political prisoners. Speakers also demanded freedom for foreign diplomat Alex Saab, recently renditioned and illegally kidnapped from Cape Verde and imprisoned in the U.S. for his support of the Bolivarian Venezuelan government.

Over 40 international human rights groups, including the International Federation of Journalists, Amnesty International and Reporters Without Borders, have called for freedom for Assange. Demonstrations are planned around the U.S. and the world leading up to the Oct. 27 court hearing in London.