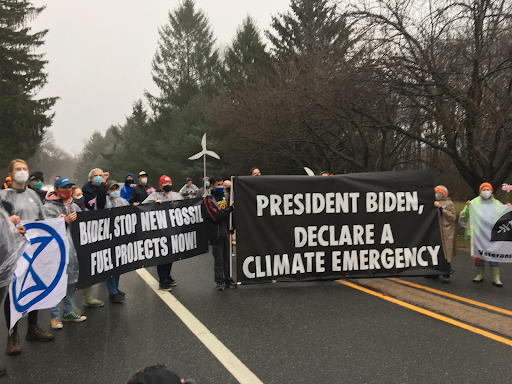 On January 1, 2022, 50 climate activists and community members marched to President Joe Biden’s Wilmington, Delaware  home to chants of “Climate Change is Class War’, “Climate Justice Now”, and “Biden Be Bold.” They hoped to deliver a letter to the president highlighting the effects of the climate crisis and presenting their demands: that the president declare a climate emergency and that his administration grant no new permits for fossil fuel projects.

They were met by a barricade of secret service and local police instead.

Protestors sang, chanted, and held signs while representatives of the encampment spoke to the police and secret service attempting to reach a representative of the president to deliver their letter, either in person or by phone. After 45 minutes, when it was clear that no such concession would be made to the protestors, the letter was read aloud, including the protestors’ demands and a deadline for them to be met: January 31, 2022.

The New Year’s Day march was the culmination of an 8-day occupation on public land near the President’s personal home, which was attended by over 200 people from 10 states as well as community members and representatives from over 20 organizations – including the Party for Socialism and Liberation, Extinction Rebellion, Beyond Xtreme Energy, 2021 Walk for Our Grandchildren, Veterans for Peace, Code Pink, Fridays for Future, and Democratic Socialists of America. Over the course of the occupation participants created art, hosted a press conference and speaker series, discussed the effects of the climate crisis on their communities, and worked to create networks of organization and mutual aid.

Karen Igou, a lead organizer of Occupy Biden and founder of Extinction Rebellion Delaware said, “Our youth are scared, angry, and smart. They know we could do better and they demand that we do so now. If our government does not do all in their power to stop our climate emergency then, I believe, they are committing genocide on our grandchildren. The scientists have stated our dire situation. The [International Energy Agency] has stated it. And Build Back Fossil Free has a Biden Executive Blueprint that he could be following, but is not.”

Scientists warn that to keep our planet livable and to avoid mass extinction, we can not let global warming surpass 1.5 C over pre-industrial levels. But at the recent COP26 UN Climate Summit in Glasgow, emission reduction pledges were made that have us on track for around 2.4 C warming. President Biden pledged that the US would reach net zero emissions by 2050, then only days later oversaw one of the largest oil and gas lease sales in U.S. history. Over 500 delegates at the summit were lobbyists from the fossil fuel industry, and they outnumbered delegates from any single country in attendance. It’s clear from this lack of proposed effective actions that the capitalist class is incapable of addressing this impending catastrophe with the seriousness and solutions necessary.

Kanmani Duraikkannan of the Delaware Youth Environmental Summit and Fridays for Future DE said she attended Occupy Biden because “Politicians, instead of doing anything, tell us to vote our way out of the problem. When we do vote, still nothing significant happens, and we are told we should have voted harder, or that we should be happy with the meager crumbs we receive, while the problem inevitably gets worse.”

A crisis fueled by colonialism and imperialism

A recurring conversation throughout the occupation was the role of colonialism in fueling the climate crisis, as well as climate change disproportionately affecting colonized people across the world. Simon Purchase, a Lenape Native attendee, led the group in song and spoke before the march, saying, “[Biden] has yet to acknowledge the Lenape. He has yet to say he comes from Lenapehoking. He has yet to meet with the chiefs and the elders of the land he grew up on, made his name on, and acts as the most powerful man in the world on.”

Earlier in the week attendees spoke about the Red Hill disaster in O’ahu, Hawai’i, where 14,000 gallons of jet fuel was spilled from the U.S. Navy’s Red Hill fuel storage facility, contaminating drinking water and displacing countless Hawai’i residents and military families. And while the Navy was able to relocate the 3,000 service members impacted along with their families, Hawai’ians are left to fend for themselves. Many have become ill from drinking the contaminated water.

Chris Velazquez of Veterans for Peace said, “The military industrial complex contributes unchecked to the climate crisis we all face. President Biden has blatantly chosen the bottomline of war profiteers over the survival of life on earth by expanding military spending while 55% of the bloated defense budget goes to private contractors. Electric Humvees and a broken F-35 will not address the ecological damage of the Navy’s water contamination at Red Hill or depleted uranium in Fallujah.”

No response from Biden

During the week-long action, the Occupy Biden camp hoped to catch the President’s attention to create a dialogue, to present their letter, to know that their elected president was seeing their actions and considering how his own inaction on the climate crisis was affecting people in his community. When the President returned from a beach trip to his home on day four of the occupation, protesters stood with signs, in freezing cold temperatures, by the road where his motorcade would have passed. But at the last minute the motorcade seemed to take a different route to avoid crossing paths with the Occupy Biden camp.

On New Year’s Eve, day seven of the occupation, the President was spotted at a local restaurant taking photos with patrons, but never engaged with the peaceful protesters just outside of his own home. But Occupy Biden participants say that the movement will continue. They have built a strong coalition of concerned activists and organizations that say they plan to return if their demands are not met.

The capitalist class is both unwilling and unable to address the climate crisis. The changes needed to stop this impending catastrophe are systemic and they will not be profitable to banks and corporations that currently benefit from fossil fuel production. Our elected “leaders” represent the very corporations that are plundering the earth for profit, not the working class. The people have the knowledge and skills to implement the changes needed to stop this disaster, but we must fight for the power to make this transformation a reality.

Will new governments in Germany and Norway take serious action on climate crisis?