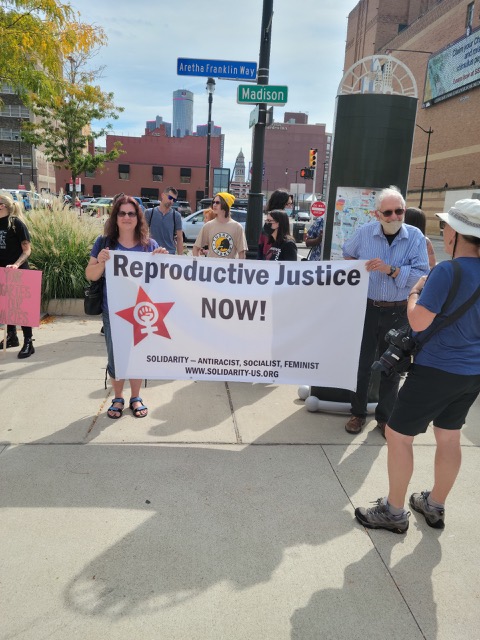 On October 2, in cities small and large, people marched and rallied for reproductive rights with many home-made, creative and funny signs. Solidarity members were there to express our support for the broad range of reproductive rights including but going well beyond the right to access abortion care:

Chicago had a spirited rally and march with estimates of up to 7,000.  Although nowhere near the size of the 250,000-strong rally on Jan 20, 2017, it was just one of 21 events held around Illinois that day to demand abortion access.   A majority of the marchers were women,  from women who fought in the 1970s for abortion access, to the large number of young women, who see abortion access as necessary for the real liberation of women, to families, including families of color, pushing strollers and walking with their children.

The mood was furious– that in no way was this patriarchal control over women’s body going to be tolerated!   Chicago Teachers Union had a contingent and a banner.

Built through Facebook, the Detroit rally against the Texas anti-abortion ban then marched and chanted two miles through downtown streets. The crowd of about 700 was primarily young, with a sprinkling of women who remembered when abortion was “illegal.” Most of the cleverly designed handmade signs focused on abortion rights, Solidarity’s banner called for reproductive justice, a slogan that combines a wide range of reproductive issues from birth control and abortion to opposition to sterilization abuse and the right to raise children in a healthy environment.

In the heart of the fight against the Texas anti-abortion law, a huge crowd, estimated at upwards of 10,000, marched and rallied, despite inclement weather, to protest the assault on reproductive rights.

Among hundreds marching in downtown Milwaukee handmade signs included “If men got pregnant, access to abortion would be a constitutional right…and it would be free”, “We are not ovary-acting,” “We need talk about the elephant in the womb,” and “If you cut off my reproductive rights, can I cut off yours?” Instead of a formal program of speakers (perhaps due to the lack of a bullhorn or sound system), young women led the crowd in continuous chanting for about an hour. Among the chants heard: “Abortion is a human right, not just for the rich and white,” “Pussy Power,” and  “Fuck Texas (or Supreme Court Justice Brett Cavanaugh, or US Senator Ron Johnson ).”

Approximately 1500 people of all ages marched from the University of Wisconsin Library Mall, up State St, to the WI State Capitol.

Despite a cold rain, 400-500 people, about 70 percent women, showed up for the Planned Parenthood/ACLU reproductive rights rally.  Some decent demands for self-determination and abortion rights came from a too long a speakers list of NGO staff and Democratic Party politicians with little to offer for a strategy forward, and no explanation of how we got here. We also heard nothing from the Democratic politicians speaking about repealing the Hyde Amendment (the Hyde Amendment bans using federal $ to cover almost all abortions).  DSA was there with flyers, placards, and literature advocating for Free Abortion on Demand – Without Apology, as well as saluting the nationwide October 2nd actions as an important step in building a powerful, mass women’s liberation movement to lead the fight for reproductive justice. The socialist message: “No one is coming to save us, not the Democrats, not the Supreme Court. It is up to us.”

About 500 people rallied and marched downtown for women’s reproductive rights. The M.C., Molly Watson, of the California Black Women’s Democratic Club, had this to say:

“We know that black women, brown women, indigenous women have higher rates of death, complications when they are pregnant, when they give birth. We know that access to affordable healthcare is not there for everybody. We know that reproductive rights for a very long time has been a white women’s issue and there are lot of here who are ready to take a lot of that back. It’s about all of us.”

Around 300 folks attended the reproductive justice rally that included music from the Mime Troup gorilla band (playing the Internationale) and a left women’s group called Occupella.

Protestors were asked to decorate their cars with activist messaging and drive them in a pre-determined loop around downtown Sacramento, passing the state capitol building and hitting some of the main thoroughfares through the city.  About 30 people gathered outside the capitol. Chants of “hands off our bodies, our bodies our choice” and “hands off our bodies, our lives our choice” were prevalent throughout the demonstration. Cars driven by protestors would pass by, honking their horns, lending the voice of their automotive klaxons to that of the demonstrators putting their bodies on the line. Cars not involved in the demonstration would also join in the honking in an inspiring show of solidarity.

Well over 1,000 people, mostly under forty years old and with a good number of parents with kids, rallied and marched. A major theme was the importance of linking abortion access to other sexuality and gender rights, including the rights of trans people to access reproductive care. The rally ended with 70’s feminist Judith Arcana reading her poem about the Jane Collective, of which she was a member.

With very little promotion or publicity until only a couple days before, well over 1,000 people showed up to the rally.