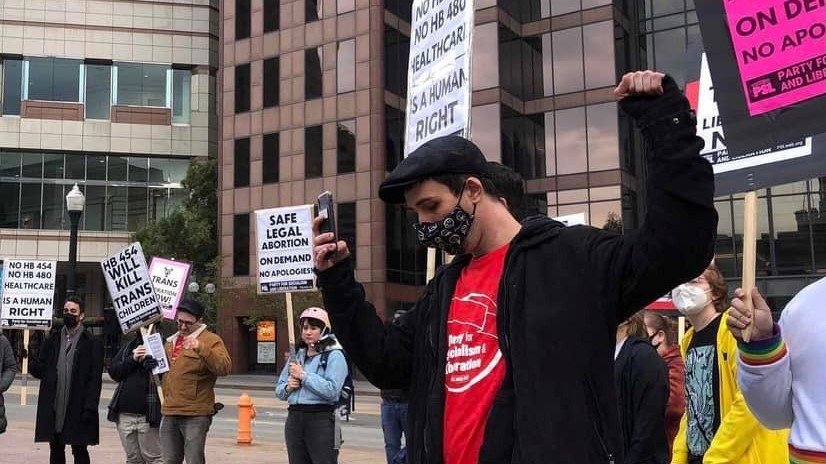 On November 20, just days after hundreds had demonstrated against legislation attacking trans children’s healthcare, activists from across Ohio gathered in Columbus to speak out against the increasingly brazen right-wing attacks on working people’s health care. The Ohio legislature has recently introduced two bills that would severely impede on working-class people’s ability to access vital health care.

The first bill, introduced on October 26, was HB 454, which would make it illegal for health care providers, Medicaid, private insurers or counselors to provide gender-affirming care to trans children, in direct opposition to the recommendation of medical experts from the American Academy of Pediatrics who issued a policy statement on the matter in 2018.

The second bill, HB 480, which was introduced on November 9, is much like the infamous Texas Senate Bill 8, in that it will allow any individual the ability to sue another individual for more than $10,000 for “knowingly [engaging] in conduct that aids or abets the performance or inducement of an abortion.”

However, Ohio HB480 will, in fact, have more extreme ramifications than Texas SB 8, as it does not even allow for an abortion prior to six-weeks after conception as the Texas bill does. Language in Ohio’s HB 480 will also most likely result in the closure of multiple Planned Parenthood clinics throughout the state.

In effect, these state-wide bills are only an attack on working people’s health care, as the wealthy elite will be able to seek medical care out of state with impunity. The additional layer of punishment levied against the poor and working class, in the form of individual lawsuits, also only effectively punishes those who cannot afford legal battles and lawsuit damages.

Both bills attack vital, life-saving health care, and seek to disrupt working people’s ability to access it, all to assuage the demands of a small minority of religious extremists. For example, without gender-affirmative care, trans children are 50% more likely to commit suicide. HB 480 also shows a lack of concern for the lives of women, as it provides no exception to its abortion ban even to save the life of a pregnant person.

Activists from across the state spoke out to a crowd in Columbus against the two bills and how they will negatively impact their communities.

A local cultural worker and PSL organizer, Shenby G, connected the attacks on bodily autonomy to the COVID-19 pandemic and imperialism, and its cavalier attitude towards the lives of working people:

“Our patriarchal, capitalist system doesn’t value people’s lives. We see their response to the worldwide Covid-19 pandemic in which the ruling class has allowed more than 750,000 lives to be lost. Lives that could have been saved if science and people were put before profit.

They will do this through the courts, through the legislature, on the local level, to the national level. From top to bottom the whole colonial, capitalist, imperialist system of ours is going to do whatever it takes to attack people’s human rights. This their ball game! But we’ve had enough. We say the whole damn system is guilty!”

Another organizer from the Miami Valley area, Jasmine Sullivan, spoke about the negative repercussions of HB454 on trans children, especially from families who harbor prejudice against trans people. “[Ohio HB 454] also states that all nurses, counselors, teachers, principals and all other officials and staff at public AND private schools cannot withhold knowledge that a minor is experiencing gender dysphoria from a minor’s parent or legal guardian. It’s not enough to deny transgender minors their bodily autonomy, but they also want to deprive them of privacy. If this bill passes, transgender children will die. They will die by suicide, and potentially other means as well. If this bill passes, transgender children will be made homeless after having their gender identity disclosed to transphobic families,” she said.

Daniel Zimmer, an activist from Cincinnati, spoke on the Supreme Court’s historic and undemocratic role in stripping away people’s humanity in service of the white, male, capitalist ruling-class. “Of the nine current Supreme Court Justices, five were appointed by presidents who lost the popular vote at least once. Their influence on the court will last for decades. Of those five justices, four recently ruled in favor of allowing Texas Senate Bill 8 — the most restrictive abortion ban in U.S. history — to take effect without any court hearing on its constitutionality,” he said.

Zimmer continued: “This Supreme Court, which can and has dismissed the humanity of people for the color of their skin, their gender, their national identity or any other part of their being, has dictated that the most sacred of human identities is that of a corporation: a lifeless entity that doesn’t know pain, suffering, joy or death. Trans lives, women’s lives, Black lives — the lives of working and marginalized people — are subject to the whims of an elite, out of touch, unelected body. Our children and our bodies are not theirs to decide what to do with. That is why we need to fight back. That is why we are here.”

What Does Health Care For All Look Like in Nicaragua?