On a Resolution in Solidarity with Ukraine 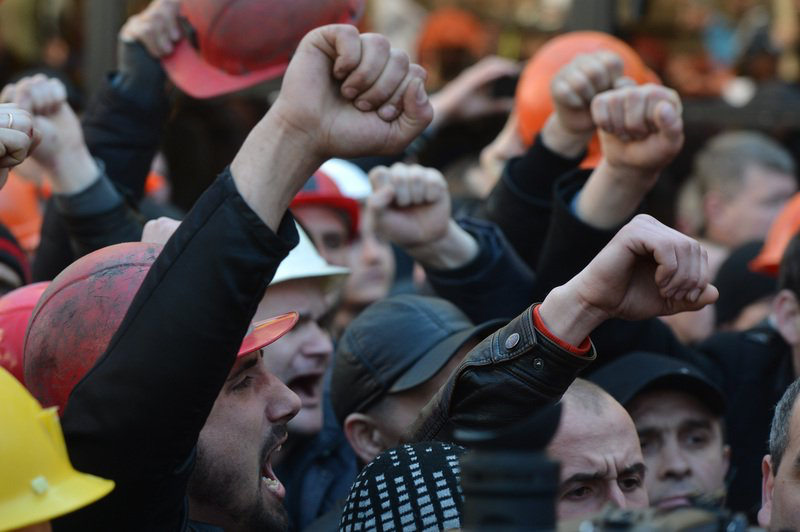 British trade unionists are being asked to support a model resolution in support of Ukraine in the war with Russia.  It is not the usual generalised call for an end to the war and for peace but is explicit support for one side. For example, it calls ‘for Russian troops to cease fire and leave all Ukrainian territory immediately.’

There is no call for a general ceasefire, so it is in effect a call for surrender by one participant. It is not clear whether the call for the territory to be retaken by Ukrainian forces includes Crimea or the currently separate Donetsk and Luhansk areas.  Aside from the clearly impossible demand that only one army cease fire it is unclear what political settlement of the war is considered just and whether what is proposed might actually demand an end to one and the effective relaunch of another.

This is important not only from a principled point of view but also because such resolutions are designed to be relatively simple and practical with obvious steps to implementation.  They are also meant to establish a specifically working class view that demonstrates the common interests of, in this case, the workers of Britain and Ukraine.

These specific working class interests must establish their difference with that of the class enemy of British workers, which is the British state and its ruling class etc.  It must demonstrate that, just as the class interest of British and Ukrainian and also Russian workers are aligned, so are the opposing class interests of the British ruling class and its fellow capitalists in Russia and Ukraine similar, even if competition between them sometimes leads to war.  Such wars do not result in the capitalist class of the rival states being expropriated or the interest of their working class being protected, quite the reverse.

The resolution instead presents the Ukrainian working class–as an object of solidarity–only as a specific section of the Ukrainian people in general.  The idea that British workers should express a view to Russian workers probably didn’t cross the minds of the drafters of the resolution.

The difficulty in framing this unity of workers cannot be denied but the approach of the resolution categorically prevents it.

The resolution states that ‘the people of Ukraine have the right to defend themselves and to obtain . . . weapons’, and in so doing opens the door to Western imperialist intervention and support for its arming of the Ukrainian state.  There is no qualification to this, either in the armed support that should be given, or the identity of the ‘Ukrainian Resistance’ forces that should be armed.  These will include those who will happily turn any guns supplied against the Ukrainian working class and its left wing.

In the context of an unprecedented propaganda campaign that has included covering up the integration of fascist units into the Ukrainian state forces, and the lionisation of the Ukrainian leader Zelensky – elected to uproot rampant corruption but now revealed to having links to his own and colleagues’ offshore accounts – it perpetuates illusions in the reactionary class character of Ukrainian military and political forces.

Very helpfully, the most recent issue of The Economist magazine has a graphic of a ‘crony-capitalism’ index which, unsurprisingly, shows Russia way out in front.  Ukraine, however, is fifth.  This crony capitalism supports the Ukrainian state and its political leaderships, and is responsible for the corruption of Ukrainian politics and society.  Ukrainian workers have suffered from and opposed this corruption for many years but the agents of it are released from any responsibility by cries from the West that ‘Ukraine’ and the ‘Ukrainian resistance’ must be supported.

Rather than demonstrate to British workers the common greed and corruption of Russian and Ukrainian oligarchs and British connivance with it, the necessary class differences are erased, perfectly mirroring the claims of the British, Ukrainian and Russian ruling classes.

The propaganda campaign in the West has presented Russia and Putin as uniquely evil.  By definition rather than just implication, the forces of the Western powers are the principled opponents of this evil – where else are the guns called for by the resolution to come from? British workers are asked to take sides in a war in which corporate and state media propaganda has blamed only Russia, an argument which the resolution explicitly endorses.

The self-styled Marxists supporting this resolution state that in this particular case it is Russia imperialism that is the aggressor, and NATO ceases to be relevant.  Only sometimes, it appears, is NATO, Britain and the United States aggressive imperialist forces such as in Iraq.  Sometimes, it must be assumed, it is on the right side – the side of Ukrainian self-determination.  The framing of the war as purely Russian aggression prevents any responsibility being assigned to NATO and its powers.  Instead, workers are invited to support its military intervention and with no warnings even on the need to limit it.  Why would there be? For the resolution there is only one issue.

The declaration that NATO is opposed is empty in such a context and mention of its eastward expansion of no consequence.  In fact, its role is explicitly absolved as ‘Putin has used the pretext that Ukraine wanted to join NATO to justify yet another war for regime change.’ Anyone assigning any responsibility to NATO must presumably be joining in with Putin in giving a reason for the war that is not the real reason, echoing again the claims that placing anything other than full blame on Russia is to be a dupe of Vladimir Putin.

The resolution states that it supports sanctions but that ‘we believe that sanctions should hit the Russian oligarchs and war machine, not the people.’  Since these sanctions are already hitting workers in the West and to an even greater extent threaten peoples in places such as North Africa, Middle East and East Asia, the idea that they will not hit Russian workers even harder is pure deceit.

Finally, all this is justified by the central need to ‘support the right of the people for Ukraine to self-determination without foreign military or economic pressure.’  If this were to be the case Ukraine would be the only nation in the world able to determine its fate ‘without foreign military or economic pressure.’  That the drafters of the resolution think this is possible, and particularly of Ukraine, shows remarkable ignorance of the country’s history and its permanent geographical position.

It also shows that they do not understand the demand for self-determination, which refers only to the right of a nation to independence from incorporation within another state.  Once formal independence is achieved the idea that workers and socialists should guarantee its freedom of action is a licence for every capitalist power to demand of its own working class and others’ that it be supported because its freedom is circumscribed by other capitalist powers.  It is a perfect recipe for the complete subordination of each working class to its own capitalist state and capitalist class in their competition with every other.

Self-determination by Ukrainian workers, for whom we are in solidarity, can only come through unity with workers in Russia and the rest of Europe.  The desire if its leaders to join NATO has helped precipitate the invasion.  Joining it would subordinate Ukraine to the requirements of US imperialism, which will continue to employ NATO to contain and weaken Russia and to constrain the demands of its main rival China.  This is not the future that Ukrainian workers should seek or British workers support through arming the Ukrainian state.

The weakness of the Ukrainian working class is being exploited by both its own rulers and the Western powers. It is a result of internal divisions exploited by its oligarchs and political leaders and its geopolitical position.  Overcoming this division and outside threat will not be achieved by defending the rights of the Ukrainian capitalist state or effective capitulation to the strongest external power.

Its immediate vulnerability can mainly be addressed by workers in the Ukraine itself, in so far as it is able to assert its separate class interests.  Surrendering it to the political leadership that walked them into this nightmare and the NATO predator that presents itself as their saviour is politically fatal.  Workers outside the country can show their common class interests through material support; opposition to the war – especially in Russia – and others’ solidarity with it; and political solidarity based on clear assertion of international working class unity.

The Russian invasion of Ukraine

The War in Ukraine and the Left

23rd Congress of the Communist Party of India (Marxist): Extracts from the Draft Political Resolution

Resolution of the anti-war round table of the Left forces

The crisis in Ukraine is not about Ukraine. It’s about Germany