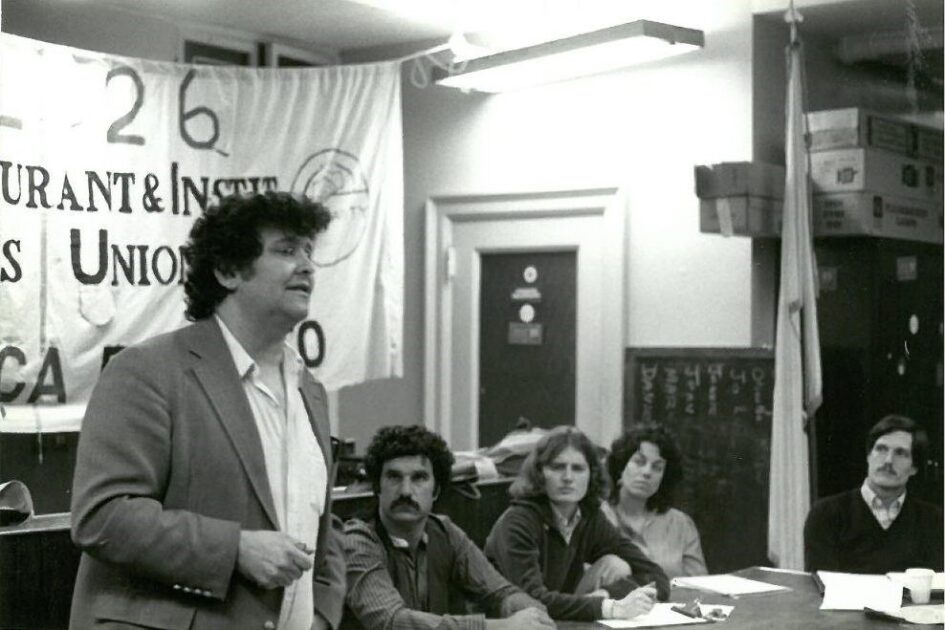 [Stanley Aronowitz, who died at age 88 in mid August, was to the many on the left who knew and deeply respected him Gramsci’s quintessential organic intellectual. Articulate in prose and breathtaking as a speaker, he was an experienced trade union organizer, prolific author on working-class life, and an academic of the first rank who was himself, as a tenured sociologist at the City University of New York Graduate School, well aware of the limitations incurred by the odious and arbitrary divisions of the social sciences as well as the limitations of contract unionism and its eliding of the capacity for workers to control their own unions, let alone their workplaces.

Unlike many radicals who trace their thinking back from traditional left organizations, Stanley was a bit of an outlier, identifying most closely with the Council Communist tradition, a variant blend of syndicalism and political organization that put its emphasis on socialism from below and the capacity of working people to emancipate themselves and make their own history.

A founding editor of the 1960s decade’s seminal journal Studies on the Left, a key organizer of union participation in the 1963 Civil Rights March on Washington, and an erstwhile editor of this journal as well as a decades’ long sponsor of our work, Stanley was always available to emerging radicals as a mentor, speaker at teach-ins, and warm friend and mentor. Laudatory obituaries have already appeared in Jacobin and Truthout. More will doubtlessly appear. He will be much missed.

Below is a remembrance of Aronowitz by Steve Early, himself a leading contemporary labor writer and one deeply appreciative of the things Aronowitz brought not only to the text but to the class struggle and to emerging militant social and culture insurgencies.

Brother Stanley Aronowitz was always ahead of the curve, with his criticism of the shortcomings of old labor and his envisioning of “a new workers movement” that might replace it. During the 1960s, campus radicals turned to him, as a former factory worker and staff member of the Oil, Chemical, and Atomic Workers, for advice about the student left’s much debated and then still pending “turn toward the working class.” Late in life, while well embedded in academia, he remained a teacher union activist and successful reform caucus member.

In a series of incisive books like False Promises, Working-Class Hero, and From the Ashes of the Old, Stanley always took “slumbering mainstream unions” to task for their lack of militancy, diversity, internal democracy, and progressive politics. Less than a decade ago, in The Death and Life of American Labor: Toward a New Workers’ Movement (New York: Verso 2014), he was still on target about what was wrong and needed to be changed. “Despite brave words from AFL-CIO headquarters,” he wrote, “unions rely on the mainstream political power structure rather than their own resources for gains. They have poured hundreds of millions into electing Democrats to national and state offices and relegated the grassroots organization of workers to the margins.”

Aronowitz was particularly astute about the unhealthy synergy between membership expectations and public-sector-union functioning, as the latter have evolved since the rank-and-file upsurge that won collective-bargaining rights for teachers and other civil servants in the 1960s and ’70s. Over time, Aronowitz observed, too many public employees came to “view their unions as service providers, rather than as instruments of mobilization.” As Aronowitz noted, “The unions may fight individual grievances and negotiate decent contracts, but to call upon their members to conduct collective political fights — including direct actions that might disturb the comfortable relationship that the leadership enjoys with the employer — is well beyond the perspective, and therefore, the capacity, of the union. In short, the member is now generally a client of the union rather than its owner.”

As an alternative approach, in Death and Life of American Labor, Aronowitz offered his own blueprint for how a “militant minority within unions and the larger workers movement” could make American labor “more combative in challenging capital and the repressive state” over issues like “the super-exploitation of the working poor.” He applauded the recent emergence of worker formations in the retail and fast-food industries that functioned with voluntary membership, no legal certification, and a greater reliance on what he called “innovative direct action,” including short duration protest strikes.

This type of organizing and strike activity reflects, in part, the continuing erosion of an 86-year-old industrial relations system based on “exclusive representation,” “contract unionism,” and accompanying no strike clauses. In the last decade, Stanley wrote, “the era of labor-management cooperation that was initiated by the New Deal and supported by succeeding legislation… has come to an end.” He argued that continued union reliance on a last-century institutional framework, now under attack by private corporations and right-wing politicians alike, is not helping “workers meet the challenges created by globalization and its significantly aggravated anti-union political and social environment.”

Stanley was one of the few left labor intellectuals who also took note of the fact that the Wagner Act regime (and related AFL-CIO rules) create nearly insurmountable legal obstacles to workers switching unions or building independent ones. As a result, many union members have had more trouble holding their national and local organizations accountable to the rank-and-file than trade unionists in other countries, where switching unions (or labor federations) is much easier and there is more competition among them. Because of their far greater insulation from the threat of membership defection to rival organizations—and reform from within–incumbent union officials in the U.S. have been much freer to embrace labor-management partnering, with results that have never been good, from the auto industry to healthcare.

In the U.S., Aronowitz noted, “any association that chooses to independently organize workers within an established union’s jurisdiction, even workers from a group that the union has effectively abandoned, is going to be seen as a threat. This is not necessarily a bad thing: competition may goad the conventional unions to undertake their own organizing. As we have seen, competitive unionism is often a stimulus to mobilization and ultimate success.”

The greater union pluralism that Stanley hoped would emerge, amid American labor’s continuing shrinkage, has yet to materialize, on a large scale. But there are many new working class heroes, not blinded by 21st century false promises, who still hope to build better organizations from the ashes of the old—who should check out the past writings of a now deceased 88-year old New Yorker who knew what he was talking about, then and now.

Richmond, California-based Steve Early is most recently the author of Refinery Town: Big Oil, Big Money, and the Remaking of an American City (Beacon Press, 2017). For book ordering or speaking event information, visit: http://steveearly.org/. This article appeared on the New Politics website on August 21, 2021 here.