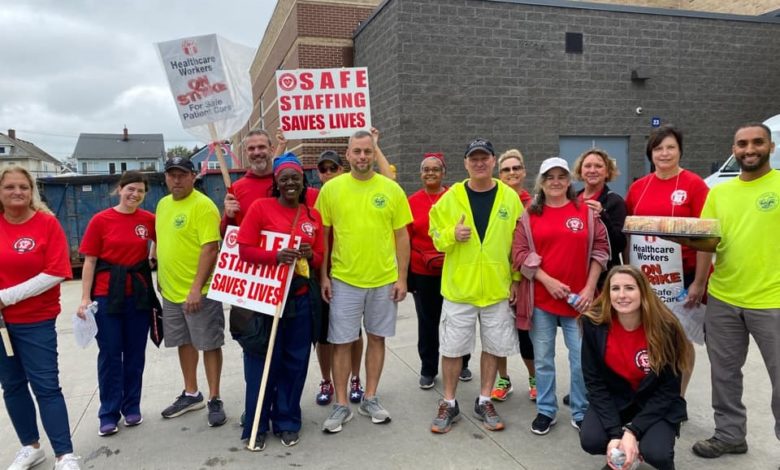 Roughly 2,500 healthcare workers represented by CWA Local 1133 at Buffalo’s Mercy Hospital have been on strike since October 1 after negotiations between Catholic Health and the union broke down over demands for higher wages, increased benefits, and safe staffing. After Catholic Health failed to provide any meaningful movement on their demands, the bargaining committee walked out after a full night of negotiations and led hospital workers to begin their strike on Friday morning at 6:00 a.m.

“We’ve always stood for the community”

The union issued “An Open Letter to Our Patients and the Buffalo Community” detailing their decision to go on strike. Workers did not make the decision lightly. Losing pay and going on an open-ended strike shows the sacrifice these workers are willing to make to change the completely inadequate conditions they are subjected to. The nurses, technical and clerical associates on strike made a clear connection between their struggle for safe working conditions as fundamental to community health. Part of the letter read, “Catholic Health can’t retain staff because our wages and benefits aren’t competitive in the region. But instead of agreeing to a fair contract that will attract and retain desperately needed new staff, Catholic Health wants to cut our health benefits, keep our wages stagnant, and force us to continue working in dangerously understaffed conditions. It is our duty and ethical obligation to stand up for our patients.”

This is why the demand for exact staffing ratios is so critical because those numbers outline explicit and clear standards of care to uphold. Without them, as critical care nurses experienced at Mercy Hospital throughout the pandemic, a nurse could have double the patients that they should — or more. Ratios in ICUs are typically 1:2 or sometimes even 1:1. Instead, Mercy Hospital ICU nurses took care of four, even five patients at a time. Yet, Mercy Hospital has failed to listen to the demands from the union for specific patient staffing ratios.

This is the kind of compromised care that is systemic in a healthcare model built on prioritizing profit over people. Tina Knop, a long time critical care nurse said at a press conference leading up to the strike, “There is not a shortage of nurses — I want to be clear with that — there is a shortage of nurses that are willing to work under these conditions and under these unsafe ratios.”

As of October 12, the hospital has released to the press a new proposal which includes adding 250 new employees. Historically this kind of proposal has failed to rectify the chronic understaffing workers are raising, and was seen by workers as totally inadequate to resolve the problems that led to the strike. The hospital provided a similar proposal in the 2016 negotiations which CWA Area Director Debora Hayes explained, “They hit that number, and once they hit it, things deteriorated down to conditions worse than they were when we started negotiations.”

Looking at staffing as only a number to hit instead of accounting for the real conditions of the hospital and the nuances of patient care like acuity reduces healthcare to a static metric rather than meeting the needs of the patients and healthcare workers. Furthermore, proper comprehensive staffing remains critical to retention of staff. In a survey of 500 workers across three of Catholic Health’s hospitals, 97% stated that their hospital is struggling to retain staff with most citing quality of care, staffing shortages, low pay and working conditions.

A critical moment for critical care

Healthcare workers at Mercy Hospital are ready to do whatever it takes, left with no other options than to go on an open-ended strike. They are not falling for Mercy Hospital’s recent proposal that won’t meet the needs of the workers or the patients, and this week forced Mercy Hospital back to the negotiating table as the company feels the pressure from the strike.

National CWA union officials are committed to supporting the workers for however long they decide to remain on the picket line and community members in Buffalo are showing up to support, especially union members. Workers are bracing for what may very well be a long fight.

The pandemic clearly sharpened and brought to widespread public attention the realities of the United States healthcare system as woefully insufficient and inhumane. At the same time, employers all over the country and across industries continue to blame the national “labor shortage” as the culprit for poor working conditions. But it is clear that healthcare workers are standing up and fighting back against the industry’s emphasis on wealth over health by walking out and voting with their feet.

Find ways to stay up to date and support the striking workers in Buffalo here.