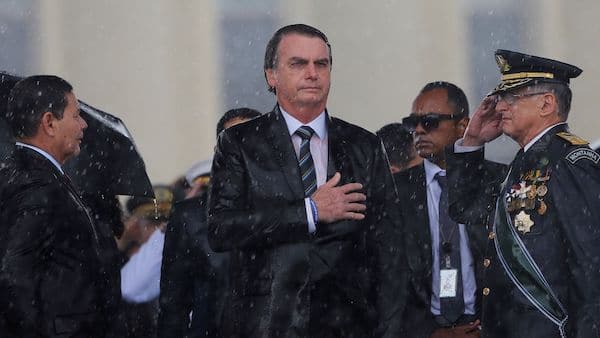 The military has published 13 manifestos in favor of Bolsonaro in the last two weeks.

Where there is smoke, there is fire, goes the popular saying. Most Brazilians and world public opinion know that Brazil is governed by a man of fascist convictions. Bolsonaro always praises the torturers of the military dictatorship implanted in Brazil in 1964 and regrets that “at least 30,000 subversives” were not shot.

Elected president on the wave of moralism triggered by the fraudulent Operation Lava Jato, Bolsonaro appointed to important civilian functions in the government more than 6. 000 military officers; unleashed the orchestrated dissemination of fake news; ignored the gravity of the pandemic, which he called a “small flu”; recommended drugs that lack scientific evidence; delayed the importation of vaccines and, despite the nearly 600 thousand deaths from Covid 19, the Ministry of Health has not yet adopted a protocol for national testing and immunization and, now, is investigated by the Senate, a den of corruption, for the purchase of vaccines at overprice, involving military officers.

Bolsonaro repeats: “only God can remove me from power”. All this despite the 15 million unemployed, the 30 million people in misery, the 19 million suffering from chronic hunger and inflation of more than 8% per year.

There will be presidential elections in 2022. All polls point to Lula as the voters’ preferred candidate. Although many of them regret having voted for Bolsonaro in 2018, and others still refuse to vote for the PT, the truth is that, so far, no alternative candidate to the Lula versus Bolsonaro polarization has been found. There are several names on the agenda, but none that gathers enough votes to threaten either candidate and represent an alternative between the left and the right.

Foreseeing that Lula could defeat him in 2022, as polls indicate, Bolsonaro began to defend the printed vote. For 25 years, Brazil has adopted electronic ballot boxes, and there has never been any suspicion of fraud. Brazil’s electoral past teaches that the paper ballot is vulnerable to fraud. Voters with low education and income are often pressured by “colonels” (militia, police, farmers, chiefs, pastors and priests) to give their vote to a certain candidate in exchange for money, favors or intimidation.

In electronic voting there is no way to verify the voter’s vote. But a paper ballot gives a receipt. There is a paper proof if the voter really voted for the indicated candidate. And this favors electoral fraud, the only recourse Bolsonaro has to try to avoid defeat next year.

For the return of the paper ballot, which would be added to the electronic one (a printer would be placed in the ballot box), a constitutional amendment approved by the National Congress is necessary. The issue should have been voted by the House of Representatives in the first half of July. When the bolsonarista deputies realized they would be defeated, they maneuvered to move the decision to August, after the parliamentary recess.

Brazilian democracy would not be threatened if it depended on the Supreme Federal Court (STF) and the Superior Electoral Court (TSE), which are against the printed vote. However, on July 9, the commander of the Air Force, Carlos Baptista Junior, declared to the newspaper “O Globo” that it is up to the Armed Forces to protect Brazilian democracy. In the same interview, he affirmed: “We will not give up on that”. And he pontificated:

Armed men do not threaten.

I remember Brazil on the eve of the 1964 coup, which implemented 21 years of military dictatorship. The leaders of the left, in which I militated through the student movement, said that they did not fear a coup, that the democratic institutions were solid, that President Jango Goulart had a strong military backing against the violation of the Constitution.

Now I hear the same discourse of the solidity of democratic institutions and the lack of conjunctural conditions for a return to dictatorship, even from voices on the right. However, no active military officer dared to disagree with the coup threat of the Air Force commander. None has spoken out against Bolsonaro’s repeated coup bluster. And on July 8, the Minister of Defense, General Braga Netto, who commands all three arms, reportedly told the president of the Chamber of Deputies that “if there are no printed and auditable ballots in 2022, there will be no elections.” On the same day, Bolsonaro declared in public: “Either we make clean elections in Brazil or we don’t have elections”. He fears that the Parliament will reject the constitutional amendment to allow the printed ballot.

The civil authorities received the coup demonstrations as a “bluff”, in the opinion of a minister of the STF who did not want to be identified. But, I repeat, where there is smoke, there is fire. The deafening silence of the active military is worrisome. No one dares to disagree.

The Brazilian people have taken to the streets in massive demonstrations against the Bolsonaro government. This is the recourse we have to save democracy. However, the military will opt for a coup d’état, institutionalizing Bolsonaro as dictator.