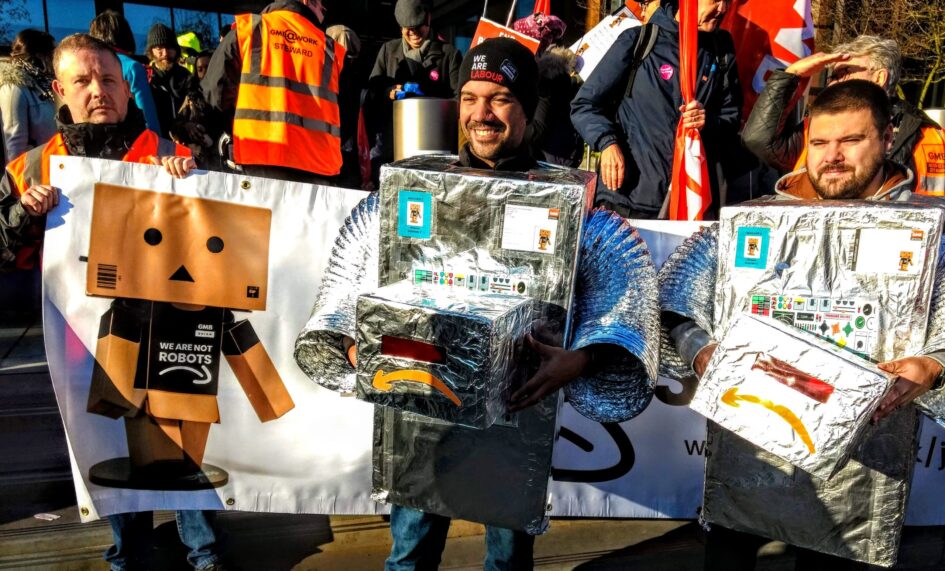 In July 2021, the world witnessed Jeff Bezos’ “best day ever” as he traveled to space. It was not long after stepping out of his shuttle that the richest man in the world thanked all Amazon employees and customers, adding “because you guys paid for all of this.”

The public outrage at this crass and true statement was huge and justified. Amazon is notorious for cutting workers out, be that of a collective say at work, of an employment contract or even of a toilet break. Work pressure is high, workers’ every move is monitored, and any hint of discontent is met with fierce repression.

What the world didn’t know at that time was that Bezos forgot to thank another group that paid for this space walk: taxpayers.

According to new research released by UNI Europa, the European services workers’ union, Amazon received over a billion in taxpayer euros, pounds, Swiss francs and Danish krone through public contracts in the last three years.

These governments are allowing a corporation at the centre of union-busting, tax-dodging and market fixing scandals, to carve out a too big to fail role in the provision of public services. When the company was invited by the European Parliament to be questioned over its intrusive surveillance of workers, it refused point blank.

Progressive members of the European Parliament were quick to react to the new revelations. “If Amazon cannot sit down and reach agreements with workers’ unions, then we will send a clear message in the only language it seems to speak: money,” said MEP Agnes Jongerius.

MEP Leïla Chaibi proposed that “public procurement contracts should only be open to companies that respect their workers and pay their taxes.” Public procurement can and must be used for the public good to drive up standards by only rewarding companies that meet their responsibilities to their workers, the public and the planet. A growing number of people and MEPs back workers’ demands for procurement to be fixed at EU level.

As well as highlighting the obvious contradiction of rewarding a company with public business whose record of tax dodging and union busting run contrary to stated policy goals, the UNI Europa report raises two further issues these contracts raise.

First, several of these contracts outsource to Amazon the management of government data. As MEP Kim van Sparrentak has argued, this could make it “harder to enforce EU data protection rules,” as Amazon is based outside the EU. Second, when Amazon cuts unionised employers out of the market through undercutting and expands its conflictual labour model, it is also an attack on workers and their chance at a fair share of the wealth they create. As MEP Evelyne Gebhardt put it, “Amazon has been aggressively expanding its e-commerce operations in Europe despite allegedly running at a loss. This expansion was only possible through the huge sums transferred by Amazon’s lucrative web and cloud computing arm (Amazon Web Services, AWS).”

But Amazon’s greed in claiming this public money could backfire. From the streets to our parliaments, momentum is building to address Amazon’s abuses. Amazon’s receipt of major public funds while paying so little in tax is an obvious injustice that could spur action, including to fix broken procurement rules which allow for such topsy-turvy decisions.

Across the world, workers have been taking collective action to push back against Amazon. The Make Amazon Pay coalition has brought together workers and activists across borders and issues into a powerful alliance for change. Amazon’s big money public contracts may be good for the company’s short-term bottom line, but they could add fuel to the widespread calls to Make Amazon Pay.

World opinion: U.S. is no model of democracy