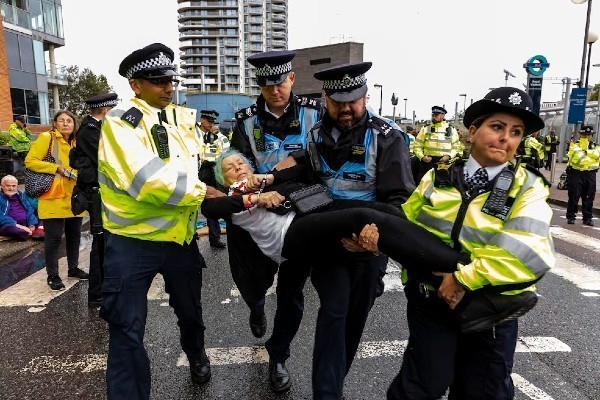 A protester being arrested outside the DSEI arms fair in 2019 (Pic: Neil Terry)

It’s arms fair season. Over the next couple of months top politicians, generals, weapons makers and dealers will gather at three major conventions across Britain.

Here, the desperate want of Britain’s ­warmongering politicians to remain an important military power meets the hunger for profits of those who deal in death.

For the Tory government, spending on high tech weapons and the military is key to trying to prop up Britain as the US’s junior imperial partner.

The government’s defence review was published this year.

It aimed to set out how Britain should keep its clout and celebrated that it spends more on defence than any other European country.

For the arms companies, this is all a big chance to cash in. And the Tories are very happy for Britain to be the place the world’s ­governments come to arm themselves to the teeth.

That’s why the ministry of defence and the ­department for international trade are official supporters of the DSEI arms fair in east London next week.

It entices them with the fact that the government “has committed an ­additional £16.5 billion to its defence budget. That’s the largest investment in 30 years.”

Conference speakers include two Tory ministers, two top British Army generals, and another top officer from the US.

DSEI’s “theme” is built on the government’s defence review too.

One passage of the review says the government’s ­priority is developing technologies for “near-peer, high-tech warfighting.”

Much of the jargon—“integration of new technologies,” “multi-domain operations and interoperability with allies,”—means ­preparing the military for total war with China.

It’s about re-arming the military, tailoring it to the needs of the US, making Britain indispensable. DSEI says the conference will be a chance for the arms industry to find out how to “deliver” this.

In Liverpool, too, the AOC Europe arms fair, set to take place in October, promises to bring together “world ­leading experts from the military, government, academia and industry.”

The focus of this one is “electronic warfare.” This is often just presented as ways of shutting down military equipment.

But the arms dealers there will also be selling space-age ways of killing—anti-aircraft lasers, electromagnetic “rail guns” and the like.

Though for all that, the arms industry clearly has a lucrative future in selling bombs, drones and fighter jets.

Embedded in a long defence of the West’s retreat from Afghanistan, Joe Biden last week gave his vision for the future of US wars.

There’ll be no more big invasions—no “boots on the ground”. Instead there will be more airstrikes of the sort that killed ten Afghan ­civilians just days before the final US soldier left last week.

It’s not a new idea. The previous Democrat president Barak Obama pioneered these “drone wars” when he became US president more than a decade ago.

So, at DSEI, men in suits will gawk at combat ­aircraft, drones and warships—bought and sold not just to Britain, but to repressive regimes such as Saudi Arabia, and to Israel for use against Palestinians.

After Israel’s assault on Gaza earlier this year, the Palestine Solidarity Campaign and the Campaign Against the Arms Trade (CAAT) are organising ­protests outside the fair.

And in Liverpool CAAT is set to protest on Saturday 11 September. Protests against the arms fair in Liverpool forced the city’s mayor to oppose it going ahead.

Behind the security fences, the suited arms merchants can still be made to feel the pressure.