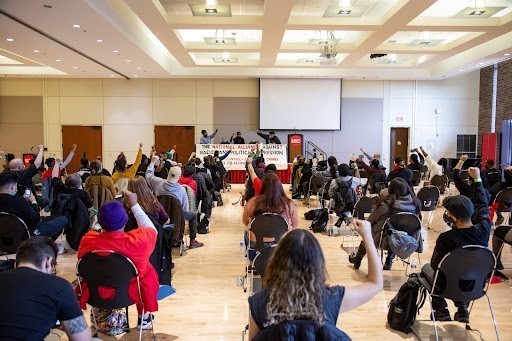 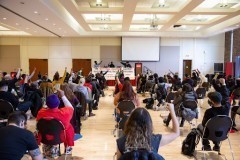 Opening of the National Alliance Against Racist and Political Repression conference.
(Alec Ozawa)

Chicago, IL – Two years after the refounding of the National Alliance Against Racist and Political Repression (NAARPR) in November 2019, over 125 NAARPR members and affiliates from around the country convened for the second NAARPR conference in Chicago starting on Saturday, December 4. They shared updates about their work fighting against police crimes and for community control of the police, among other areas of struggle, then voted on resolutions and new leadership for the next two years.

Due to the ongoing COVID-19 pandemic the conference was attended only by delegates from NAARPR chapters and affiliated organizations. The plenary sessions on the first day of the conference were livestreamed on the Chicago AARPR Facebook page so people who could not be there in person could participate virtually.

Saturday morning began with an opening plenary on the purpose of the conference and the work of NAARPR. The meeting was facilitated by NAARPR co-chair Michael Sampson. Delegates heard speeches from SEIU HCII President Greg Kelly and NAARPR executive director Frank Chapman, as well as a video statement from Angela Davis, a leader of the original NAARPR. Davis stressed that the fight to free political prisoners is an ongoing part of the struggle against systemic racism.

SEIU HCII played a key role in this fight by putting the strength of their 90,000 members behind the Empowering Communities for Public Safety legislation in Chicago, the most progressive police accountability ordinance in the country, and a step towards community control of the police. Kelly cited the murders of Michael Brown and Laquan McDonald as reasons why his union was motivated to get involved in the fight for police accountability.

Chapman spoke on the necessity of the alliance between community organizations like NAARPR and unions like SEIU, saying “the objective is to build the biggest, baddest mass movement this country has seen in a long time.”

The floor was then opened for delegates to report on the work their chapters have done over the past two years. Many spoke about the uprising in the wake of the murders of George Floyd and Breonna Taylor, the most massive uprising in U.S. history. NAARPR affiliates organized protests of tens of thousands of people in various cities around the country, including cities like Jacksonville, Florida which had never seen protests of that size before. Other initiatives described by delegates included fighting for justice with the families of people killed by the police, successful efforts to cut police budgets, actions in solidarity with anti-imperialist movements, campaigns to free survivors of police torture and wrongful conviction, defenses of protesters against political repression, and struggles for community control of the police.

The rest of the first day consisted of a plenary on community control of the police, one breakout session discussing the fight against political repression, one breakout focusing on the importance of the families of those killed or harmed by the police in the struggle, and a final plenary session summing up the lessons learned during the opening day of the conference.

The wide variety of speakers demonstrated the progress NAARPR has already made towards building the mass movement.

Sunday’s sessions focused on electing new leadership and voting on the actions NAARPR would resolve to take over the next two years. Delegates voted on seven resolutions: to defend and expand voting rights, to free political prisoners, to defend the right of immigrant families to stay together by fighting deportations, to free Alex Saab from the political repression of the U.S. empire, to continue to stand in solidarity with the Palestinian liberation struggle, to support the Filipino people’s fight against U.S.-backed terror, and to build class struggle unionism. Delegates then ratified the NAARPR bylaws and formally elected the officers and executive board of the National Alliance. The leadership reflects the Black led, multigenerational character of the organization.

Delegates left the conference expressing feelings of pride in the work done since NAARPR’ s refounding two years ago, as well as optimism and excitement for the years ahead building the movement for community control of the police across the U.S. Monique Sampson, co-founder of the Jacksonville Community Action Committee and newly elected NAARPR national desk secretary, led the delegates in a chant written by freedom fighter and former political prisoner Assata Shakur: “It is our duty to fight for our freedom. It is our duty to win. We must love and protect one another. We have nothing to lose but our chains.”

Nothing to Lose but Our Chains: Work and Resistance in Twenty-First-Century Britain – book review

BC forestry plan is lose-lose for Indigenous nations, forestry workers and the planet

Do-nothing measure on Minneapolis police voted down in referendum

Why They Do Nothing Against Climate Change: Creative Destruction and Ash’s Experiment