Organizing in an Age of Catastrophes 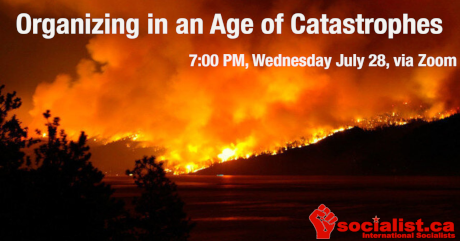 The environmental crisis is getting worse. The last few weeks have given us a glimpse of the climate chaos to come. Hundreds died during the unprecedented heat wave at the end of June. Coastal invertebrates like mussels, snails, and clams were cooked in the water. With well over a thousand forest fires so far this year, we are heading to another record breaking year of fires. Floods have killed nearly 200 people across Europe, many killed when the flood waters swept away their homes.

Meanwhile Prime Minster Trudeau and Alberta Premier Kenney have spent $23 billion so far on pipeline, and BC Premier Horgan has overseen subsidies of over $1 billion a year for oil and gas companies.

Business as usual is taking us to weather extremes that threaten our existence as a species. But there is hope. We can build a climate movement that includes a just transition for workers, sovereignty for Indigenous nations, and starts to heal the planet. But that means we have to take the climate movement into our workplaces and schools. The call for a Global Climate Strike on September 24 will be a key opportunity to do that.

This fall the International Socialists will do everything we can, everywhere we can, to build the Climate Strike on September 24 and to spread it beyond that.

Starting in September, campuses and businesses will be fully open again. Join us to plan for the Climate Strike and our fall meetings: Wednesday July 28 at 7PM PDT via zoom. Click here to register for the meeting. You will receive a confirmation email with the zoom details.