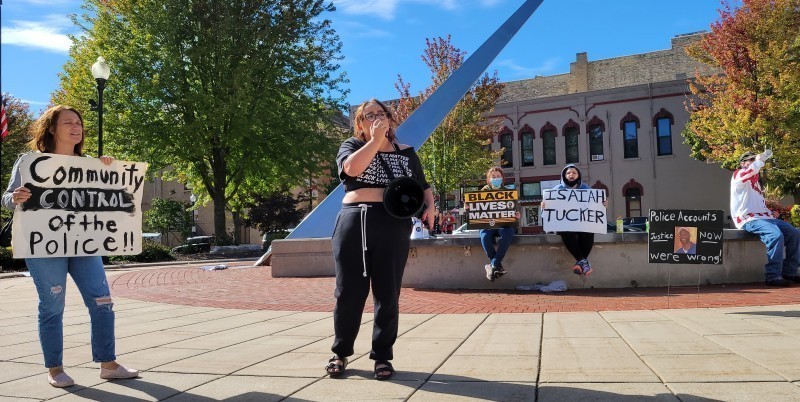 The Oshkosh, WI protest demands a Civilian Police Accountability Council, or CPAC, in their city.
(Fight Back! News/staff)

Oshkosh, WI – Over a dozen community members rallied in downtown Oshkosh on Saturday afternoon, September 25, to demonstrate their support for a Civilian Police Accountability Council, or CPAC, in their city.

The rally took place at Isaiah Tucker Square, recently renamed by the community in memoriam of Isaiah Tucker, a father of three children, who was murdered by officers Aaron Achterburg and Kyle Roberts of the Oshkosh Police Department in 2017. Several grassroots community action groups united to organize the demonstration, including United Action Oshkosh, Food Not Bombs, and Hope Fridge.

Sophia Rose, an organizer with United Action Oshkosh said, “I helped to organize this event because I believe that it’s important that cities across the U.S., including Oshkosh, begin to look at solutions to the policing problem. CPAC is a great start to police accountability and community control.”

Rose continued, “We’ve gotten to a point where police are seen as above us when they are not, they work for us. We pay them, they are supposed to ‘protect and serve’ us.”

The event drew a positive response from the community and passersby who stopped to talk, learn, and enjoy hot food and refreshments from Food Not Bombs. The rally ended with a call to action, for people to support their local grassroots community organizations, join them and help them grow.