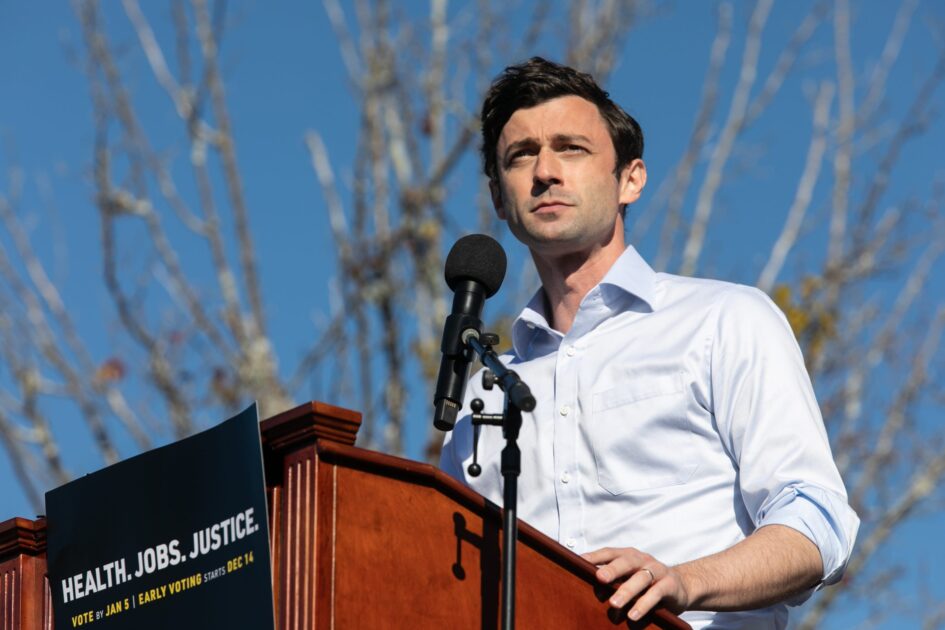 This story originally appeared in Common Dreams on Jan. 14, 2022. It is shared here with permission under a Creative Commons (CC BY-NC-ND 3.0) license.

Two Democratic senators on Wednesday unveiled legislation that would prevent congressional lawmakers and their immediate families from trading stocks while in office, as new polling shows that an overwhelming majority of voters across the political spectrum support such a reform—something that Republicans putting forward competing proposals are trying to capitalize on.

The Ban Congressional Stock Trading Act, introduced by Sens. Jon Ossoff (D-GA) and Mark Kelly (D-AZ), would amend the Ethics in Government Act of 1978 to require members of Congress, their spouses, and dependent children to place certain investments into blind trusts or divest them—ensuring they don’t profit from privileged information obtained on Capitol Hill.

“Members of Congress should not be playing the stock market while we make federal policy,” Ossoff said in a statement.

Emphasizing that “elected leaders have access to valuable information that impacts policy, the economy, and entire industries,” Kelly said that if passed, the Ban Congressional Stock Trading Act “will put an end to corrupt insider trading and ensure that leaders in Congress focus on delivering results for their constituents, not their stock portfolios.”

Members who violate the legislation’s rules would be fined their entire congressional salary.

Pelosi made headlines last year with the multimillion dollar stock trades of her husband, investor Paul Pelosi, who among other plays exercised call options on Google stock in June that locked in $5.3 million in gains. Not done, the Pelosis purchased millions more in call options from December 17-21, just days after she defended the practice of stock trading by members of Congress in a press conference.

Pelosi’s argument—based on an easily debunked claim that the 2012 STOCK Act’s financial transaction disclosure requirements prevent insider trading among members of Congress—was condemned by government watchdog groups and progressives, who warned that her opposition to regulating the practice could have negative political repercussions for the Democratic Party.

Referencing recent polling, Ossoff said Wednesday that “3/4 of Americans agree” that lawmakers and their immediate family members should not be allowed to buy and sell stock while in office given conflicts of interest.

The popularity of barring members of Congress from trading stocks has not been lost on Republicans.

As Common Dreams reported earlier this week, Republican House Minority Leader Kevin McCarthy (R-CA) is considering enacting such a ban if the GOP wins control of the House in the upcoming midterms.

And on Wednesday, Sen. Josh Hawley (R-MO) unveiled his own, less stringent proposal to rein in Congress’ insider trading problem.

Business Insider, which obtained a copy of Hawley’s bill, reported that the Missouri Republican’s legislation excludes dependent children—even though they may have access to the same nonpublic information as their lawmaking parent—and “would require violators to forfeit any profits gained from stock-trading directly to the U.S. Treasury.”

According to a survey conducted last month by the Trafalgar Group on behalf of the Convention of State Action, a conservative advocacy organization, roughly 76% of voters say that members of Congress and their spouses have an unfair advantage and should not be allowed to trade stocks while in office. That includes over 78% of Republicans and nearly 80% of Independents.

As Common Dreams reported in April 2020, Republican and Democratic members of Congress made nearly 1,500 stock transactions worth up to $158 million in the weeks leading up to, and following the onset of, the COVID-19 pandemic—in many cases purchasing stocks in companies that might see a boost during the crisis and dumping stocks that seemed likely to decrease in value.

Ossoff and Hawley are not the first lawmakers to introduce bills to combat insider trading among members of Congress, though the new legislation reflects growing momentum to tackle the issue. Ossoff acknowledged that his proposal is similar to the bipartisan TRUST in Congress Act, unveiled last year by Reps. Abigail Spanberger (D-VA) and Chip Roy (R-TX).

Congressional Progressive Caucus Chair Pramila Jayapal (D-WA), meanwhile, noted on Wednesday night that she and Sen. Elizabeth Warren’s (D-MA) Anti-Corruption and Public Integrity Act, first introduced in 2018 and reportedly slated to be reintroduced this year, would ban “members of Congress, cabinet secretaries, federal judges, and other officials from owning and trading stock or serving on corporate boards.”

Perdue and Loeffler were two of several lawmakers accused of using information obtained during early briefings about the threat posed by the coronavirus to buy and sell stocks.

After Ossoff publicly condemned Perdue, calling him a “crook” who sought to profit from the COVID-19 pandemic while downplaying its severity and undermining his constituents’ access to healthcare, his Republican opponent refused to share a stage with him.

Ossoff fulfilled his pledge to put his own stock portfolio into a blind trust last year, making him and Kelly two of just 10 sitting members of Congress to do so.

For the immediate fulfilment of the right of the Sahrawi people to self-determination!